Ta'xet is the Haida god of violent death. He is considered to be one half of a duality; his counterpart is Tia, the goddess of peaceful death. [1]

According to Haidan folklore, the raven stole the moon from Ta'xet during earth's creation and placed it in the sky to nourish humanity. If humanity was to ever displease the raven by altering the earth's environment, he will return the moon to Ta'xet and stop protecting humanity from Ta'xet's wrath. [2] In folklore, it is also said that the souls of those who meet a violent death go to Ta'xet's house without a warning, while Tia leaves signs before she takes her victims. [3]

Aradia is one of the principal figures in the American folklorist Charles Godfrey Leland's 1899 work Aradia, or the Gospel of the Witches, which he believed to be a genuine religious text used by a group of pagan witches in Tuscany, a claim that has subsequently been disputed by other folklorists and historians. In Leland's Gospel, Aradia is portrayed as a Messiah who was sent to Earth in order to teach the oppressed peasants how to perform witchcraft to use against the Roman Catholic Church and the upper classes.

The Haida are one of the indigenous peoples of the Pacific Northwest Coast of North America. Their national territories lie along the west coast of Canada and include parts of south east Alaska. Haida mythology is an indigenous religion that can be described as a nature religion, drawing on the natural world, seasonal patterns, events and objects for questions that the Haida pantheon provides explanations for. Haida mythology is also considered animistic for the breadth of the Haida pantheon in imbuing daily events with Sg̣ā'na qeda's.

Ta'aroa is the supreme creator god in the mythology of French Polynesia. While the use of the ʻeta is appropriate given the pronunciation of his name, as is typically the case with Tahitian words it is often omitted in practice. He then created the queen of all nations

The Bushongo or Songora are an ethnic group from the Congo River and surrounding areas. The creator god in Bushongo mythology is called Bumba. He existed alone in darkness, the world consisting only of water. Bumba was said to appear like a gigantic man in form and white in color. The creation took place when he vomited forth the sun, moon, earth, plants, and animals and then humanity. Bomazi is the ancestor-god of the Bushongo. 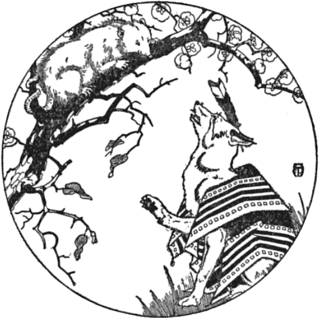 Finnish mythology is a commonly applied description of the folklore of Finnish paganism, of which a modern revival is practiced by a small percentage of the Finnish people. It has many features shared with Estonian and other Finnic mythologies, but also shares some similarities with neighbouring Baltic, Slavic and, to a lesser extent, Norse mythologies.

Tia is the goddess of peaceful death in the Haida mythology. She is considered to be part of a duality. Her counterpart is Ta'xet, the Haida God of violent death.

Philippine mythology is the body of stories and epics originating from, and part of, the indigenous Philippine folk religions, which include various ethnic faiths distinct from one another. Philippine mythology is incorporated from various sources, having similarities with Indonesian and Malay myths, as well as Hindu, Muslim, Shinto, Buddhist, and Christian traditions, such as the notion of heaven, hell, and the human soul. Philippine mythology attempts to explain the nature of the world through the lives and actions of heroes, deities, and mythological creatures. The majority of these myths were passed on through oral tradition, and preserved through the aid of community spiritual leaders or shamans and community elders.

Coyote is a mythological character common to many cultures of the indigenous peoples of North America, based on the coyote animal. This character is usually male and is generally anthropomorphic, although he may have some coyote-like physical features such as fur, pointed ears, yellow eyes, a tail and claws. The myths and legends which include Coyote vary widely from culture to culture.

Zanahary is the personified sky of Malagasy mythology and folklore. He is considered a creator god, having collaborated with the earth god Ratovantany to create humanity; upon death, the soul migrates to the firmament, while the body returns to the earth. For this reason, Zanahary is closely associated with the soul in the indigenous theology as well as ancestor worship. He is a national god of the Merina people, and frequently henceforth appealed to by Malagasy nationalist groups; most notably Ranavalona I promoted the worship of this god over Christianity. 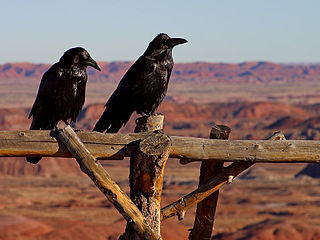 Many references to ravens exist in world lore and literature. Most depictions allude to the appearance and behaviour of the wide-ranging common raven. Because of its black plumage, croaking call and diet of carrion, the raven is often associated with loss and ill omen. Yet its symbolism is complex. As a talking bird, the raven also represents prophecy and insight. Ravens in stories often act as psychopomps, connecting the material world with the world of spirits.

Mastorava (Масторава) is a Mordvin epic poem compiled based on Mordvin mythology and folklore by Aleksandr Sharonov, published in 1994 in the Erzya language, with a Moksha language version announced. 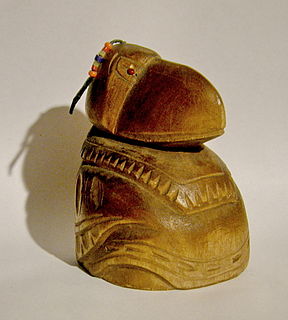 Kutkh, is a Raven spirit traditionally revered in various forms by various indigenous peoples of the Russian Far East. Kutkh appears in many legends: as a key figure in creation, as a fertile ancestor of mankind, as a mighty shaman and as a trickster. He is a popular subject of the animist stories of the Chukchi people and plays a central role in the mythology of the Koryaks and Itelmens of Kamchatka. Many of the stories regarding Kutkh are similar to those of the Raven among the indigenous peoples of the Pacific Northwest Coast, suggesting a long history of indirect cultural contact between Asian and North American peoples.

In Norse mythology, Hjúki and Bil are a brother and sister pair of children who follow the personified moon, Máni, across the heavens. Both Hjúki and Bil are solely attested in the Prose Edda, written in the 13th century by Snorri Sturluson. Scholarly theories that surround the two concern their nature, their role as potential personifications of the craters on the Moon or its phases, and their relation to later folklore in Germanic Europe. Bil has been identified with the Bilwis, an agriculture-associated figure that is frequently attested in the folklore of German-speaking areas of Europe. 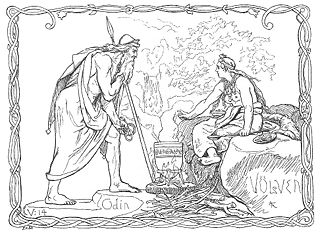 Norse mythology is the body of myths of the North Germanic peoples, stemming from Norse paganism and continuing after the Christianization of Scandinavia, and into the Scandinavian folklore of the modern period. The northernmost extension of Germanic mythology, Norse mythology consists of tales of various deities, beings, and heroes derived from numerous sources from both before and after the pagan period, including medieval manuscripts, archaeological representations, and folk tradition.

The origin of death is a theme in the myths of many cultures. Death is a universal feature of human life, so stories about its origin appear to be universal in human cultures. As such it is a form of cosmological myth. No one type of these myths is universal, but each region has its own characteristic types. Such myths have therefore been a frequent topic of study in the field of comparative mythology.

In mythology and folklore, a vengeful ghost or vengeful spirit is said to be the spirit of a dead person who returns from the afterlife to seek revenge for a cruel, unnatural or unjust death. In certain cultures where funeral and burial or cremation ceremonies are important, such vengeful spirits may also be considered as unhappy ghosts of individuals who have not been given a proper funeral.