Women's association football, also commonly known as women's football or women's soccer is the most prominent team sport played by women around the globe. It is played at the professional level in numerous countries throughout the world and 176 national teams participate internationally.

Tartu JK Merkuur was an Estonian football club based in Tartu. Merkuur was one of the founding members of the Meistriliiga, the top-tier of Estonian football. 2006, the last year of its existence, the club was known as JK Maag for sponsorship reasons. After finishing 5th in the Meistriliiga, the club merged with city rivals Tammeka under the name Tartu JK Maag Tammeka. They played their home matches in Tamme Stadium. 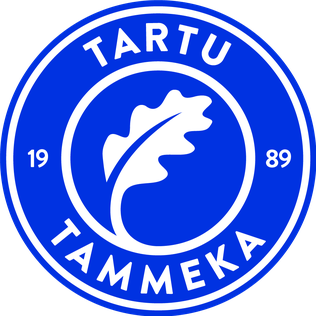 Tartu JK Tammeka, commonly known as Tartu Tammeka or simply Tammeka, is a football club, based in Tartu, Estonia, that competes in the Meistriliiga, the top flight of Estonian football.

II liiga is the fourth level of football league competition in Estonia arranged by the Estonian Football Association. It consists of 28 teams, divided geographically into two divisions with 14 teams respectively in group North/East and South/West. Until 2013 it was third-top league.

Jaanus Sirel is an Estonian former professional footballer. He was playing the position of defender and midfielder.

Tartu JK Tammeka U21 is the reserve team of JK Tammeka Tartu, an Estonian football club. They last played in the Esiliiga, the second level of the Estonian football league pyramid. The team was dissolved for 2014 season because of financial trouble of Tammeka, but reformed later.

JK Luunja was an Estonian football club, which originates from Luunja near the city of Tartu. Their home ground is located in nearby Kaagvere village in Mäksa Parish.

Elhadj Ousmane Barry, also known as Pato, is a Guinean international footballer who plays as a centre forward for Saudi club Abha.

The 2012–13 Estonian Cup was the 23rd season of the Estonia's most prestigious football knockout tournament. The winner of the Cup qualifies for the first qualifying round of the 2013–14 UEFA Europa League. Flora won the competition after they defeated Kalju 3–1 in the final.

The 2013 Meistriliiga was the 23rd season of the Meistriliiga, the first level in the Estonian football system. The season began on 2 March 2013 and ended on 9 November 2013. Nõmme Kalju, the defending champions, finished runners-up behind Levadia, who won their 8th title.

The 2013–14 Estonian Cup was the 24th season of the Estonia's most prestigious football knockout tournament. Levadia won the competition after they defeated Santos 4–0 in the final. As Levadia had already qualified for UEFA Champions League as reigning Estonian Champion Santos qualified for the first qualifying round of the 2014–15 UEFA Europa League as the cup runners-up.

The 2011 season is the 20th full year of competitive football in the Baltic country as an independent nation.

The 2015–16 Estonian Cup was the 26th season of the Estonian main domestic football knockout tournament. The cup holders, Nõmme Kalju, were knocked out in the Quarter-Finals by Sillamäe Kalev. Flora won their seventh title after defeating JK Sillamäe Kalev 3–0 in the final.

The 2016 Meistriliiga was the 26th season of the Meistriliiga, the highest division of Estonian football system. The season began on 4 March 2016 and concluded on 5 November 2016.

The 2016–17 Estonian Cup was the 27th season of the Estonian main domestic football knockout tournament. FCI Tallinn won their first title after defeating Tammeka 2–0 in the final.

FC Otepää is a football club, based in Otepää, Estonia.

The 2018 Meistriliiga was the 28th season of the Meistriliiga, the highest division of Estonian football system. The season was scheduled to begin on 25 February 2018, but was postponed due to a cold wave. On 3 March, the season began with four out of five second round matches held in indoor arena. This marked the first time Estonian league football was played indoor. The season concluded on 10 November 2018. Flora were the defending champions. Nõmme Kalju won their 2nd Meistriliiga title completing an entire season undefeated.

The 2018 II liiga was the 24th season of the II liiga, fourth-highest league for association football clubs in Estonia.