The Killjoys were a punk band from Birmingham, England, formed in 1976, with members including Kevin Rowland and Kevin "Al" Archer, who would later form Dexys Midnight Runners, and Ghislaine "Gil" Weston, who would later join Girlschool. Although their releases while still together were limited to one single, subsequent interest has seen an album of their recordings released.

Kevin Rowland (vocals, a trained hairdresser), Ghislaine "Gil" Weston (a.k.a. "Gem", bass guitar), and Mark Philips (guitar) had been members of the mid-1970s Roxy Music-inspired band Lucy & the Lovers. [1] With the advent of punk rock, Rowland wrote new songs and started The Killjoys, adding Heather Tonge (backing vocals) and Joe 45 (Lee Burton, drums). [1] [2] The band relocated to London and took up lodgings in a disused branch of Barclays Bank. The band came to the attention of Raw Records boss Lee Wood, who signed the band for the single "Johnny Won't Get to Heaven"/"Naïve", which went on to sell 18,000 copies. [1] This was the largest-selling single that Raw Records ever had. [3] At the time, the band contained two couples: Philips and Weston, and Rowland and Tonge. [4] This line-up lasted for eighteen months, and several recording sessions took place for a debut album. [3] The Killjoys recorded two sessions for John Peel's BBC Radio 1 show: the first in October 1977, the second in February 1978, by which time Keith Rimell (guitar) and Bob Peach (drums) had been recruited, replacing Philips and Burton; Rowland used his hairdressing talents to give the new members short haircuts. [1] Tonge also left the group; according to Wood, the rumor was that Rowland had returned home early and found her in bed with someone else. [3]

The band disintegrated when Rowland's enforced eight-hour practice sessions began to take their toll, especially because other members of the band had a vision of it that was different than Rowland's. [4] [5] The tension between Rowland and the rest of the band was clear; Rimell described the atmosphere as "us against him", and Gareth Holder of The Shapes noted "the level of hatred that the rest of the Killjoys appear to have for [Rowland]". [1] Rimell left the band after an argument with Rowland, [4] to be replaced by Kevin Archer, who Rowland insisted should be renamed "Al" Archer as he did not want another "Kevin" in the band. [1] A story circulated that Rowland rejected a £20,000 contract with Bronze Records because it was only a singles deal, to the disdain of other band members; [1] however, in 2004 Weston questioned the validity of the story, [4] and in 2007 Rowland said the story was "nonsense". [5]

Peach, Philips and Weston soon left to form Out of Nowhere (later called Alternating, and then Luxound Deluxe), with Weston later joining Girlschool on the recommendation of Lemmy. [1] Rowland, disillusioned with punk rock, immersed himself in vintage soul music, particularly the records of Geno Washington, and (with Archer) formed a new band, Dexys Midnight Runners. [6]

Girlschool are a British rock band that formed in the new wave of British heavy metal scene in 1978. Frequently associated with contemporaries Motörhead, they are the longest-running all-female rock band, still active after more than 40 years. Formed from a school band called Painted Lady, Girlschool enjoyed strong media exposure and commercial success in the UK in the early 1980s with three albums of 'punk-tinged metal' and a few singles, but lost their momentum in the following years.

Screaming Blue Murder is the third studio album by British heavy metal band, Girlschool. It was released on Bronze Records in 1982, and featured one line-up change in bassist Ghislaine 'Gil' Weston, formerly of The Killjoys, replacing the recently departed founding member Enid Williams. Nigel Gray, who had previously worked with The Police, produced the album.

Play Dirty is the fourth studio album by British heavy metal band, Girlschool, released on Bronze Records in 1983 and produced by Noddy Holder and Jim Lea from the hard rock band Slade. It was the first Girlschool album not to enter the UK Top 40 album chart and signalled a general downturn in their career, along with an inclination towards a softer rock sound. Kelly Johnson left the band soon after the release and an intended full US-tour never materialised. In the UK, two singles were lifted from the album, each having a picture-sleeve:

Running Wild is the fifth studio album by the British heavy metal band Girlschool, released on Mercury Records in 1985. 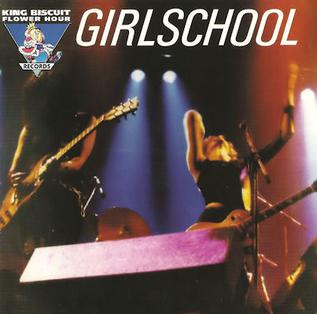 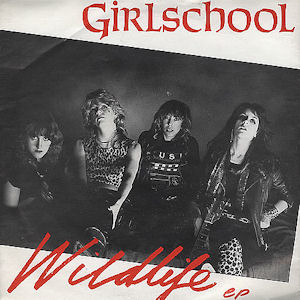 Wildlife is an EP produced by British heavy metal band, Girlschool and published only in Europe. It was released in 1982 by Bronze Records as a launch for the album Screaming Blue Murder. During the recording sessions for the album, bassist and singer Enid Williams left the band and this EP is the last production made by the original formation. The songs "Don't Call It Love" and "Wildlife" were recorded again for the album with new bass player Ghislaine 'Gil' Weston and new vocal tracks. The EP was also available in a red vinyl edition. 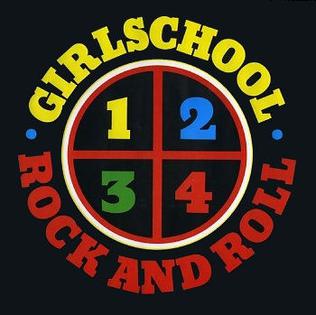 1-2-3-4 Rock and Roll is an EP produced by British heavy metal band, Girlschool. It was released in 1983 by Bronze Records, in an attempt to boost the declining sales of the band and launch the upcoming new album Play Dirty. The title track was produced by Ramones' producers Ritchie Cordell and Glen Kolotkin, who completed with samples the recording process that the band refused to carry on. The same song was released by the American band Rail the same year.

Misspent Youth were a glam punk band from Birmingham, England. Formed in 1975, they were heavily influenced by the New York Dolls and The Stooges. They released the single "Betcha Wont Dance" backed with their anthem "Birmingham Boys" on ex-Black Sabbath manager Jim Simpson`s record label Big Bear Records in 1979 and could "boast quite a following" in Birmingham.