The Only Good Indian

Last updated November 08, 2020
This article is about 2009 American independent Western film. For the 2020 horror novel, see The Only Good Indians. For the American aphorism, see Philip_Sheridan § Indian_Wars.

The Only Good Indian is a 2009 American independent Western film directed by Kevin Willmott.

The film was shot almost entirely in Kansas—the only exception being a scene at Missouri's Ha Ha Tonka State Park [1] —featuring locations such as the Monument Rocks and Fort Larned.

Filming took place in 2007-2008, and the movie premiered at the 2009 Sundance Film Festival, [2] subsequently showing at other film festivals. The film won Willmott "Best Director" honors at the American Indian Film Festival, as well as acting honors for Wes Studi and Winter Fox Frank in his debut as the Kickapoo youth. [3]

The story is set in Kansas during the early 1900s. A Kickapoo youth (newcomer Winter Fox Frank) is taken from his family and forced to attend a distant Indian boarding school, designed to achieve to his assimilation into White society. When he escapes to return to his family, Sam Franklin (Wes Studi), a bounty hunter of Cherokee descent, is hired to find and return him to the school.

Franklin, a former Indian scout for the U.S. Army, has renounced his Native heritage. He has adopted the White Man’s way of life, believing it’s the only way for Indians to survive. Along the way, a tragic incident spurs Franklin’s longtime nemesis, noted `Indian Fighter` Sheriff Henry McCoy (J. Kenneth Campbell), to pursue both Franklin and the boy.

The film premiered in 2009 at the Sundance Film Festival, and was shown at numerous other festivals. It won awards for its director and leads at the American Indian Film Festival.

Robert W. Butler of the Kansas City Star thought that Wilmott was well-intentioned but did not fully realize the reach of revisionist history. Audiences have liked it but the film has not had wide distribution. [5] The Hollywood Reporter praised Studi's performance.

Travis Keune, reviewing the film at the Saint Louis Film Festival, said that it started with a great premise and, while the execution was flawed, it was worth watching. [6] 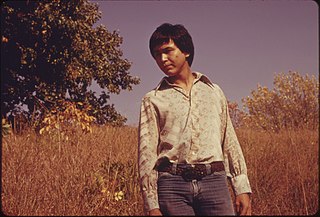 The Kickapoo people are an Algonquian-speaking Native American and Indigenous Mexican tribe, originating in the region south of the Great Lakes. Today, there are three federally recognized Kickapoo tribes in the United States: Kickapoo Tribe of Indians of the Kickapoo Reservation in Kansas, the Kickapoo Tribe of Oklahoma, and the Kickapoo Traditional Tribe of Texas. The Oklahoma and Texas bands are politically associated with each other. The Kickapoo in Kansas came from a relocation from southern Missouri in 1832 as a land exchange from their reserve there. Around 3,000 people are enrolled tribal members. Another band, the Tribu Kikapú, resides in Múzquiz Municipality in the Mexican state of Coahuila. Smaller bands live in Sonora and Durango. 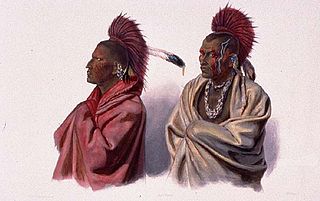 The Sac or Sauk are a group of Native Americans of the Eastern Woodlands culture group, who lived primarily in the region of what is now Green Bay, Wisconsin, when first encountered by the French in 1667. Their autonym is oθaakiiwaki, and their exonym is Ozaagii(-wag) in Ojibwe. The latter name was transliterated into French and English by colonists of those cultures. Today they have three federally recognized tribes, together with the Meskwaki (Fox), located in Iowa, Oklahoma and Kansas. 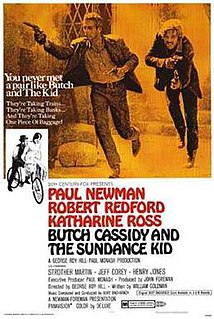 Butch Cassidy and the Sundance Kid is a 1969 American Western film directed by George Roy Hill and written by William Goldman. Based loosely on fact, the film tells the story of Wild West outlaws Robert LeRoy Parker, known as Butch Cassidy, and his partner Harry Longabaugh, the "Sundance Kid", who are on the run from a crack US posse after a string of train robberies. The pair and Sundance's lover, Etta Place, flee to Bolivia in search of a more successful criminal career. 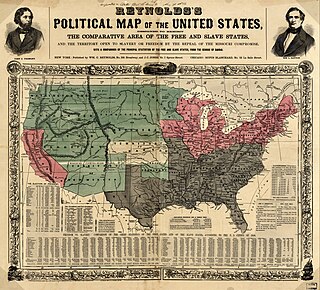 Bleeding Kansas, Bloody Kansas, or the Border War was a series of violent civil confrontations in Kansas Territory, United States, between 1854 and 1861 which emerged from a political and ideological debate over the legality of slavery in the proposed state of Kansas. The conflict was characterized by years of electoral fraud, raids, assaults, and murders carried out in Kansas and neighboring Missouri by pro-slavery "Border Ruffians" and anti-slavery "Free-Staters". It has been called a civil war of its own, and a Tragic Prelude to the great American Civil War which immediately followed it. About 200 people were killed.

Wesley Studi is a Cherokee American actor and film producer who has won critical acclaim and awards, particularly for his portrayal of Native Americans in film. He has appeared in Academy Award-winning films, such as Dances with Wolves (1990) and The Last of the Mohicans (1992), and in the Academy Award-nominated films Geronimo: An American Legend (1993) and The New World (2005). He is also known for portraying Sagat in Street Fighter (1994). Other films he has appeared in are Hostiles, Heat, Mystery Men, Avatar, A Million Ways to Die in the West, and the television series Penny Dreadful. In 2020, he received an Academy Honorary Award, becoming the first Native American and the second North American Indigenous person to be honored by the Academy.

Chris Eyre, an enrolled member of the Cheyenne and Arapaho Tribes, is an American film director and producer who as of 2012 is chairman of the film department at the Santa Fe University of Art and Design. 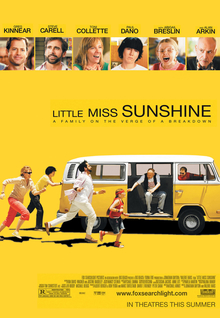 Little Miss Sunshine is a 2006 American comedy-drama road film and the directorial debut of the husband-wife team of Jonathan Dayton and Valerie Faris. The screenplay was written by first-time writer Michael Arndt. The film stars Greg Kinnear, Steve Carell, Toni Collette, Paul Dano, Abigail Breslin, and Alan Arkin, and was produced by Big Beach Films on a budget of US$8 million. Filming began on June 6, 2005, and took place over 30 days in Arizona and Southern California.

Kevin Willmott is an American film director and screenwriter, and professor of film at the University of Kansas. He is known for work focusing on black issues including writing and directing Ninth Street,C.S.A.: The Confederate States of America, and Bunker Hill. His The Only Good Indian (2009) was a feature film about Native American children at an Indian boarding school and the forced assimilation that took place. In Jayhawkers (2014), he followed the life of Wilt Chamberlain, Phog Allen and the 1956 Kansas Jayhawks basketball team. Willmott has collaborated with Spike Lee, with whom he shared an Academy Award for Best Adapted Screenplay for BlacKkKlansman. The two again collaborated in writing Da 5 Bloods, released worldwide digitally on June 12, 2020. 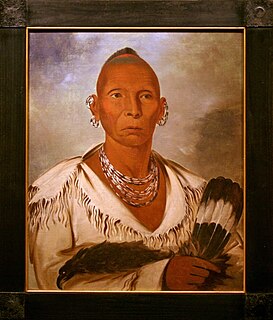 The Sac and Fox Nation of Missouri in Kansas and Nebraska is one of three federally recognized Native American tribes of Sac and Meskwaki (Fox) peoples. Their name for themselves is Nemahahaki and they are an Algonquian people and Eastern Woodland culture. 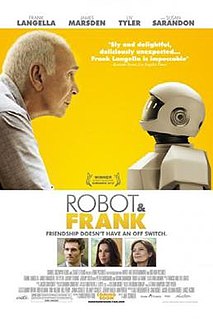 Robot & Frank is a 2012 American science fiction comedy-drama film directed by Jake Schreier and screenplay by Christopher Ford. Set in the near future, it focuses on Frank Weld, an aging jewel thief, played by Frank Langella, whose son buys him a domestic robot. Resistant at first, Frank warms up to the robot when he realizes he can use it to restart his career as a cat burglar. 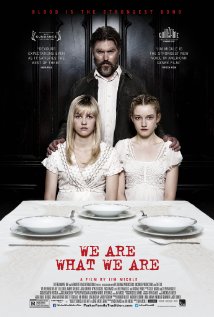 We Are What We Are is a 2013 American horror film directed by Jim Mickle and starring Bill Sage, Julia Garner, Ambyr Childers, and Kelly McGillis. It was screened at the 2013 Sundance Film Festival and in the Directors' Fortnight section at the 2013 Cannes Film Festival. It is a remake of the 2010 Mexican film of the same name. Both a sequel and prequel have been announced. 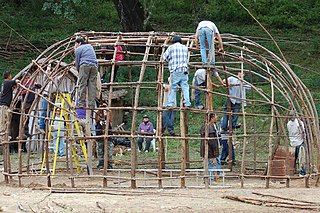 The Mexican Kickapoo are a bi-national indigenous people, some of whom live both in Mexico and in the United States. In Mexico, they were granted land at Hacienda del Nacimiento near the town of Múzquiz in the state of Coahuila in 1850. A few small groups of Kickapoo also live in the states of Sonora and Durango. The Mexican Kickapoo often work as migrants in Texas and move throughout the midwest and the western United States, returning in winter to Mexico. They are affiliated with the federally recognized tribes of the Kickapoo Traditional Tribe of Texas, Kickapoo Tribe of Oklahoma, and Kickapoo Tribe in Kansas.

The Kickapoo Tribe of Indians of the Kickapoo Reservation in Kansas is one of three Federally recognized tribes of Kickapoo people. The other Kickapoo tribes in the United States are the Kickapoo Traditional Tribe of Texas and the Kickapoo Tribe of Oklahoma. The Tribu Kikapú are a distinct subgroup of the Oklahoma Kickapoo and reside on a hacienda near Múzquiz Coahuila, Mexico; they also have a small band located in the Mexican states of Sonora and Durango.

Jared Ian Goldman is an American film and television producer. He is known for his work on Alex Strangelove, Ingrid Goes West, The Skeleton Twins, the Academy Award-nominated Loving, The Punisher for the Marvel Cinematic Universe, Wilson,Kill Your Darlings, Solitary Man, And So It Goes, The Wackness, and the Sundance Grand Jury Prize winning documentary Manda Bala .