According to the Institute, [1] the Festival was first presented in Seattle, Washington in 1975 and moved in 1977 to San Francisco, where it remains today. In 1979, the Festival was incorporated.

Over 3,100 films have been screened from Native American/First Nations communities in the U.S. and Canada, and the festival includes events such as film screenings, panel discussions, an awards ceremony and networking events. [2]

This festival is not to be confused by the Native American Film and Video Festival, which was founded in 1979. 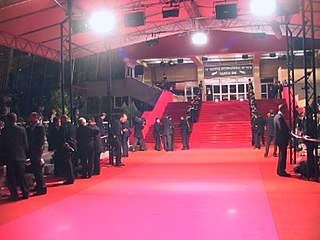 Haskell Indian Nations University is a federally operated tribal university in Lawrence, Kansas. Founded in 1884 as a residential boarding school for American Indian children, the school has developed as a North Central Association-accredited university that offers both associate and baccalaureate degrees. The college was founded to serve members of federally recognized Native American tribes in the United States.

The San Francisco International Film Festival, organized by the San Francisco Film Society, is held each spring for two weeks, presenting around 200 films from over 50 countries. The festival highlights current trends in international film and video production with an emphasis on work that has not yet secured U.S. distribution. In 2009, it served around 82,000 patrons, with screenings held in San Francisco and Berkeley.

Raven Chacon is a Diné artist known as a composer of chamber music, as well as a solo performer of noise music. He was born in Fort Defiance, Navajo Nation, Arizona, United States).

James Luna was a Payómkawichum, Ipi, and Mexican-American performance artist, photographer and multimedia installation artist. His work is best known for challenging the ways in which conventional museum exhibitions depict Native Americans. With recurring themes of multiculturalism, alcoholism, and colonialism, his work was often comedic and theatrical in nature. In 2017 he was awarded a Guggenheim Fellowship.

How People Got Fire is a short, poetic animated film from the Yukon.

Shelley Niro is a Mohawk filmmaker and visual artist from New York and Ontario. She is known for her photographs using herself and female family members cast in contemporary positions to challenge the stereotypes and clichés of Native American women.

Suzi Yoonessi is an Iranian-American filmmaker living in Los Angeles, CA. She wrote and directed the award-winning feature film Dear Lemon Lima, and directed the Duplass Brothers film Unlovable and Daphne and Velma for Warner Brothers. Yoonessi's short films No Shoulder and Dear Lemon Lima are distributed by Shorts International and Vanguard Cinema and her documentary film Vern is distributed by National Film Network and is in the permanent collection of the San Francisco Museum of Modern Art. 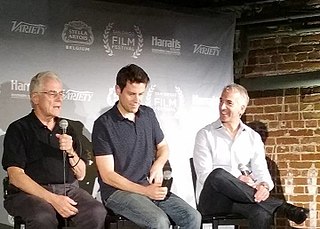 The San Diego International Film Festival(SDIFF), held annually in the autumn across two "villages" in the Gaslamp Quarter and La Jolla, is the largest independent film festival in San Diego, California, and is produced by the non-profit San Diego Film Foundation.

Sonia Boileau is a Canadian First Nations filmmaker belonging to the Mohawk Nation of the Haudenosaunee Confederacy.

Le Dep is a 2015 Canadian psychological drama film directed by Sonia Boileau. The film tells the story of a young Innu woman who is held at gunpoint one night while working at a convenience store in a small First Nations community in rural Quebec. Set in a fictional Innu community, the film's dialogue is mostly in French, with some Innu-aimun. Le Dep is the first First Nations production of Telefilm Canada's Micro-Budget program. The film's world premiere was at the 2015 Karlovy Vary International Film Festival, following which the film played various festivals in Canada, the United States, and United Kingdom and had a theatrical run in Montreal.

Postcommodity, a Southwest Native American Artist collective, was founded in 2007 by Kade Twist and Steve Yazzie Their name refers to the "commodity era" of Native American art trading in the late 1800s and 1900s, with the "post" being in reference to their modern take on traditional Native art forms.