During the 1921 Mallee drought, sixteen-year-old Shawn Hoffner leaves behind farm life to find work to support his family. He finds work on a Murray River steamboat.

The Murray River is a river in southeastern Australia. It is Australia's longest river at 2,508 km (1,558 mi) in length, and its tributaries include five of the next six longest rivers of Australia, whose catchment area together form the Murray-Darling basin.

Mitta Mitta River, a perennial river and a direct tributary of the Murray River within the Murray-Darling basin, is located in the alpine district of Victoria, Australia.

Murray may refer to: 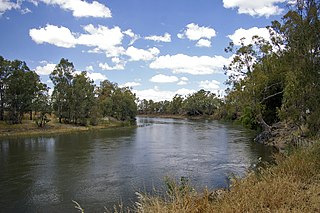 Murrumbidgee River, a major tributary of the Murray River within the Murray–Darling basin and the second longest river in Australia. It flows through the Australian state of New South Wales and the Australian Capital Territory. It descends 1,500 metres (4,900 ft) as it flows 1,485 kilometres (923 mi) in a west-northwesterly direction from the foot of Peppercorn Hill in the Fiery Range of the Snowy Mountains towards its confluence with the Murray River near Boundary Bend. 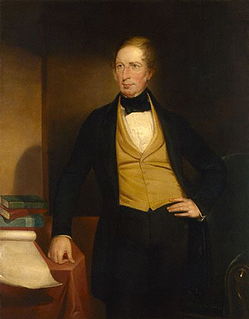 Charles Napier Sturt was a British officer and explorer of Australia, and part of the European exploration of Australia. He led several expeditions into the interior of the continent, starting from Sydney and later from Adelaide. His expeditions traced several of the westward-flowing rivers, establishing that they all merged into the Murray River, which flows into the Southern Ocean. He was searching to prove his own passionately held belief that an "inland sea" was located at the centre of the continent. He reached the rank of Captain, served in several appointed posts, and on the Legislative Council. 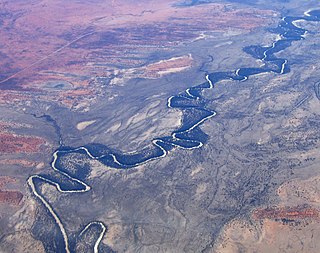 The Murray–Darling basin is a large geographical area in the interior of southeastern Australia, encompassing the drainage basin of the tributaries of the Murray River, Australia's longest river, and the Darling River, a right tributary of the Murray and Australia's third-longest river. The basin, which includes six of Australia's seven longest rivers and covers around one-seventh of the Australian landmass, is one of the country's most significant agricultural areas. It drains southwestly into the Great Australian Bight and spans most of the states of New South Wales and Victoria, the Australian Capital Territory, and parts of the states of Queensland and South Australia.

Lake Burley Griffin is an artificial lake in the centre of Canberra, the capital of Australia. It was completed in 1963 after the Molonglo River—which ran between the city centre and Parliamentary Triangle—was dammed. It is named after Walter Burley Griffin, the American architect who won the competition to design the city of Canberra. 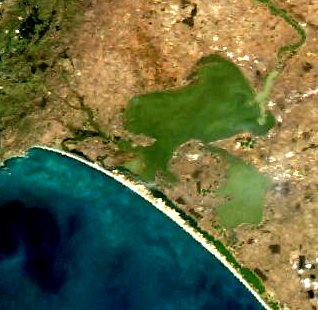 Murray Bridge is a city in the Australian state of South Australia, located 76 kilometres (47 mi) east-southeast of the state's capital city, Adelaide, and 77 kilometres (48 mi) north of the town of Meningie. The city had an urban population of approximately 18,779 as at June 2018 making it the fifth most populous urban area in the state after Adelaide, Mount Gambier, Victor Harbor - Goolwa and Whyalla.

Eucalyptus camaldulensis, commonly known as the river red gum, is a tree that is endemic to Australia. It has smooth white or cream-coloured bark, lance-shaped or curved adult leaves, flower buds in groups of seven or nine, white flowers and hemispherical fruit with the valves extending beyond the rim. A familiar and iconic tree, it is seen along many watercourses across inland Australia, providing shade in the extreme temperatures of central Australia.

The Riverland is a region of South Australia. It covers an area of 9,386 square kilometres (3,624 sq mi) along the Murray River from where it flows into South Australia from New South Wales and Victoria downstream to Blanchetown. The major town centres are Renmark, Berri, Loxton, Waikerie, Barmera and Monash, along with many minor townships; the population is approximately 35,000 people.

The Murrumbidgee Irrigation Area (MIA) is geographically located within the Riverina area of New South Wales. It was created to control and divert the flow of local river and creek systems for the purpose of food production. The main river systems feeding and fed by the area are the Murrumbidgee and the Tumut. It is one of the most diverse and productive regions in Australia contributing over A$5 billion annually to the Australian economy.

Swan Hill is a city in the northwest of Victoria, Australia on the Murray Valley Highway and on the south bank of the Murray River, downstream from the junction of the Loddon River. At June 2018, Swan Hill had a population of 11,103. 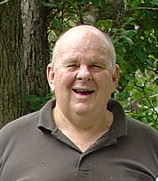 Cockburn River, a perennial river that is part of the Namoi catchment within the Murray–Darling basin, is located in the Northern Tablelands district of New South Wales, Australia.

Maxwell Edgar "Max" Fatchen, AM was an Australian children's writer and journalist.