The Space Gamer was a magazine dedicated to the subject of science fiction and fantasy board games and tabletop role-playing games. It quickly grew in importance and was an important and influential magazine in its subject matter from the late 1970s through the mid-1980s. The magazine is no longer published, but the rights holders maintain a web presence using its final title Space Gamer/Fantasy Gamer.

The Space Gamer (TSG) started out as a digest quarterly publication of the brand new Metagaming Concepts company in March 1975. [1] [2] Howard M. Thompson, the owner of Metagaming and the first editor of the magazine, stated "The magazine had been planned for after our third or fourth game but circumstances demand we do it now" [3] (after their first game, Stellar Conquest ). Initial issues were in a plain-paper digest format. By issue 17, it had grown to a full size bimonthly magazine, printed on slick paper.

When Steve Jackson departed Metagaming to found his own company, he also secured the right to publish The Space Gamer from number 27 on. In the first Steve Jackson Games (SJG) issue, Howard Thompson wrote a report on Metagaming and stated "Metagaming's staff won't miss the effort. After the change in ownership, Metagaming feels comfortable with the decision; it was the right thing to do." [4] In the same issue, Steve Jackson announced, "TSG is going monthly ... from [number 28 (May 1980)] on, it'll be a monthly magazine." [5] The magazine stayed with SJG for the next five years, during which it was at its most popular and influential. In 1983, the magazine was split into two separate bimonthly magazines published in alternating months: Space Gamer (losing the definite article with the split in Number 64), and Fantasy Gamer; the former concentrating entirely on science fiction, and the latter on fantasy. This arrangement lasted about a year. Fantasy Gamer ran six issues before being folded back into Space Gamer:

You see, we were churning out magazines - Space Gamer, Fantasy Gamer, Fire & Movement , and Autoduel Quarterly - at the rate of two a month! ... We had to find some way to preserve what little sanity we had left. The best way to do this was to merge Space Gamer and Fantasy Gamer ... As it has for the past year, Space Gamer will appear bimonthly, giving us the time to get some games done, as well. [6]

Like Metagaming before it, the effort of producing a magazine became greater than its publisher was willing to bear. The change to bi-monthly publication was not enough to allow SJG to focus on new games as they wished, and in 1985, it was announced, "We've sold Space Gamer. We'll still be heavily involved—but SJ Games won't be the publisher any longer. Giving up SG is definitely traumatic... but it gives us the time to do other things, especially GURPS". [7] The magazine had been sold to Diverse Talents, Incorporated (DTI). They initially had it as a section in their own magazine The VIP of Gaming, but it soon became a separate publication again with the previous numbering and format, but with the name Space Gamer/Fantasy Gamer. [1] Space Gamer ceased publication in September 1985. [1]

Since that time, it has gone through a number of owners, all keeping the final name, but occasionally restarting the numbering. Eventually, Better Games, now renamed Space Gamer, bought the magazine, and has kept the title alive by reinventing it through the internet. 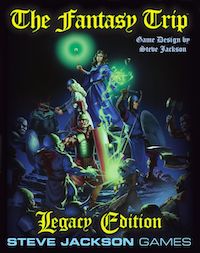 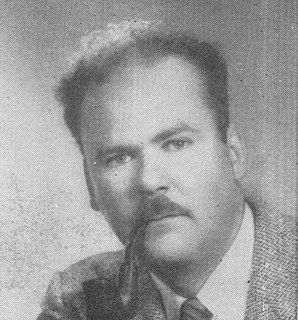 Ogre is a science fiction board wargame designed by the American game designer Steve Jackson and published by Metagaming Concepts in 1977 as the first microgame in its MicroGame line. When Steve Jackson left Metagaming to form his own company, he took the rights to Ogre with him, and all subsequent editions have been produced by Steve Jackson Games. 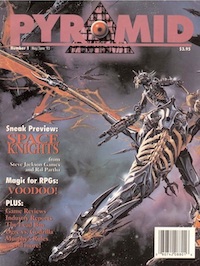 Steve Jackson is an American game designer. His notable creations include the role-playing game GURPS and the card game Munchkin.

Metagaming Concepts, later known simply as Metagaming, was a company that published board games from 1974 to 1983. It was founded and owned by Howard Thompson, who designed the company's first game, Stellar Conquest. The company also invented Microgames and published Steve Jackson's first designs, including Ogre, G.E.V. and The Fantasy Trip.

Howard M. Thompson is an American wargame designer and founder of Metagaming Concepts. His first game was Stellar Conquest, a popular and well-designed simulation of interstellar warfare.

The Conan books are sword and sorcery fantasies featuring the character of Conan the Cimmerian originally created by Robert E. Howard. Written by numerous authors and issued by numerous publishers, they include both novels and short stories, the latter assembled in various combinations over the years by the several publishers. The character has proven durably popular, resulting in Conan stories being produced after Howard's death by such later writers as Poul Anderson, Leonard Carpenter, Lin Carter, L. Sprague de Camp, Roland J. Green, John C. Hocking, Robert Jordan, Sean A. Moore, Björn Nyberg, Andrew J. Offutt, Steve Perry, John Maddox Roberts, Harry Turtledove, and Karl Edward Wagner. Some of these writers finished incomplete Conan manuscripts by Howard, or rewrote Howard stories which originally featured different characters. Most post-Howard Conan stories, however, are completely original works. In total, more than fifty novels and dozens of short stories featuring the Conan character have been written by authors other than Howard. This article describes and discusses notable book editions of the Conan stories. 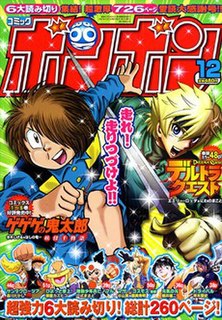 Comic BomBom was a monthly Japanese manga magazine published by Kodansha and targeted at elementary school boys. Each issue had 700+ pages, with 80 of them being full-color advertisements. Similar to its rival CoroCoro Comic, it featured tie-ins with game makers and toy makers but toward the end of its run had less of that. 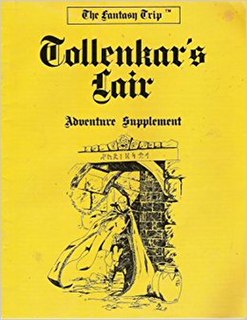 Tollenkar's Lair is a 1980 fantasy role-playing game adventure for The Fantasy Trip originally published by Metagaming Concepts and re-released by Steve Jackson Games in 2019.

Interplay was a gaming magazine published from 1981 to 1982 by Metagaming Concepts. 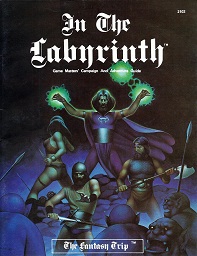 In The Labyrinth is a 1980 role-playing game supplement for The Fantasy Trip published by Metagaming. An expanded version released in 2019 by Steve Jackson Games as part of the company's revival of The Fantasy Trip. 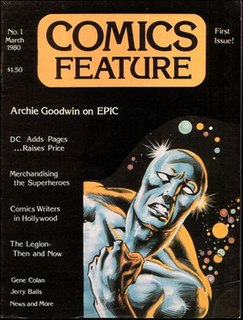 Comics Feature was an American magazine of news, criticism, and commentary pertaining to comic books, comic strips, and animation. Published by New Media Publishing, it produced 57 issues between 1980 and 1987.