The Utterly Utterly Merry Comic Relief Christmas Book was a fundraising book issued on behalf of Comic Relief in 1986. It was edited by Douglas Adams and Peter Fincham and contained contributions from Adams and many of the leading comedy writers and performers of the day. 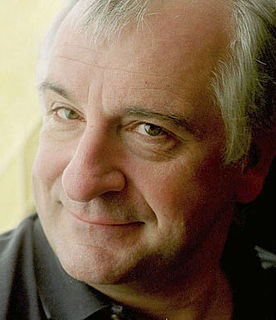 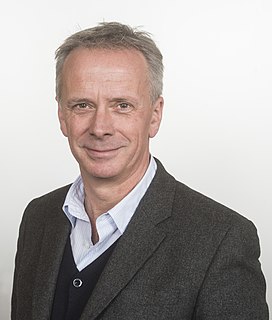 Peter Arthur Fincham is a British television producer and executive. From 2008 until 2016, he was the Director of Television for the ITV network. He was also formerly the Controller of BBC One, the primary television channel of the British Broadcasting Corporation, until his resignation on 5 October 2007, following criticism over the handling of the A Year with the Queen debacle.

The book is of particular interest to fans of Douglas Adams' work as it contains several items written by him which are hard to find or exclusive to the collection. Besides the novella Young Zaphod Plays it Safe and the short story "The Private Life of Genghis Khan", which have since appeared in The Salmon of Doubt , the book also contains Adams' short story "A Christmas Fairly Story" (written in collaboration with Terry Jones) and three supplements to The Meaning of Liff .

"The Private Life of Genghis Khan" is a short story written by Douglas Adams and Graham Chapman. It is based in part on a sketch devised by Graham Chapman, and written by Chapman and Adams for the 1975 TV show pilot Out of the Trees. It appears in The Utterly Utterly Merry Comic Relief Christmas Book and some versions of The Salmon of Doubt. It is also available on Douglas Adams' website. 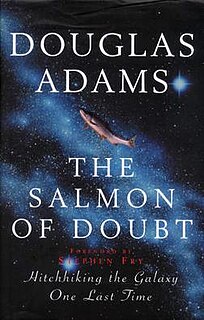 Items by other authors include:

Susan Lillian Townsend, FRSL, was an English writer and humorist whose work encompasses novels, plays and works of journalism. She was best known for creating the character Adrian Mole.

Adrian Albert Mole is the fictional protagonist in a series of books by English author Sue Townsend. The character first appeared in a BBC Radio 4 play in 1982. The books are written in the form of a diary, with some additional content such as correspondence. The first two books appealed to many readers as a realistic and humorous treatment of the inner life of an adolescent boy. They also captured something of the zeitgeist of the UK during the Thatcher period.

The True Confessions of Adrian Albert Mole, Margaret Hilda Roberts and Susan Lilian Townsend is the third book in the Adrian Mole series, written by Sue Townsend. It focuses on the worries and regrets of a teenage (supposed) intellectual. The title is long and often shortened to the more convenient The True Confessions of Adrian Albert Mole but the three names are part of the full title and represent fictional actual content of the book.

The book promised that profits would be distributed "80% to SAVE THE CHILDREN FUND and OXFAM for famine relief and 20% to Charity Projects to support young people faced with the problems of drug abuse, homelessness and disability here in Britain."

Oxfam is a confederation of 20 independent charitable organizations focusing on the alleviation of global poverty, founded in 1942 and led by Oxfam International. It is a major nonprofit group with an extensive collection of operations. Winnie Byanyima has been the executive director of Oxfam International since 2013.

The book has never been reprinted following its initial print run, as a result of religious censorship.

In line with its Christmas theme the book contained several pieces based on the Christian nativity story, including:

Christianity is a Abrahamic monotheistic religion based on the life and teachings of Jesus of Nazareth as described in the New Testament. Its adherents, known as Christians, believe that Jesus Christ is the Son of God and savior of all people, whose coming as the Messiah was prophesied in the Old Testament. Depending on the specific denomination of Christianity, practices may include baptism, Eucharist [Holy Communion], prayer, confession, confirmation, burial rites, marriage rites and the religious education of children. Most denominations have ordained clergy and hold regular group worship services. 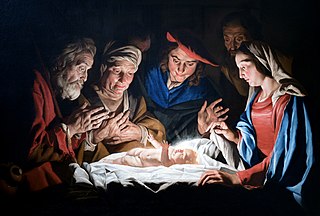 The nativity of Jesus or birth of Jesus is the basis for the Christian holiday of Christmas and is described in the gospels of Luke and Matthew. The two accounts differ, but agree that Jesus was born in Bethlehem in Judea during the reign of King Herod the Great, his mother Mary was married to a man named Joseph, who was descended from King David and was not his biological father, and that his birth was caused by divine intervention. Luke's version says the birth took place during a Roman census, mentions an announcement to shepherds by angels, presentation of Jesus in the Temple, and gives the name of the angel who announces the coming birth to Mary. Matthew's version mentions the arrival of the Magi, the flight into Egypt by the family, and the Massacre of the Innocents by King Herod. The consensus of scholars is that both gospels were written about AD 75-85, and while it is possible that one account might be based on the other, or that the two share common source material, the majority conclusion is that the two nativity narratives are independent of each other.

Nicholas Winterton MP led a campaign to ask W.H. Smith not to stock the book. [1] Christian groups took offence, and attempted to get the book withdrawn. They picketed bookshops and threatened to sue for blasphemy. Eventually they prevented the book from being reprinted by applying pressure on the publisher, Collins. Collins held the rights to print certain versions of the Bible and it was threatened that these would be withdrawn. Douglas Adams complained that, as a result, considerably less money was raised for famine relief.

The Meaning of Liff is a humorous dictionary of toponymy and etymology, written by Douglas Adams and John Lloyd, published in the United Kingdom in 1983 and the United States in 1984.

This article presents lists of the literary events and publications in 1982.

"Young Zaphod Plays It Safe" is a short story by Douglas Adams set in his The Hitchhiker's Guide to the Galaxy universe. It is included with several collections but has never been released as a standalone work. It first appeared in The Utterly Utterly Merry Comic Relief Christmas Book (1986) which Adams also co-edited. It also appears in slightly modified form in the Adams retrospective The Salmon of Doubt. The story also appears in some versions of the complete omnibus editions of The Hitchhiker's Guide to the Galaxy.

Published in 2004 by Penguin Books, Adrian Mole and the Weapons of Mass Destruction is Sue Townsend's sixth full Adrian Mole novel. It is set in 2002/3 and Adrian is 33¾ years of age. The life of the protagonist is covered for one year, with a short epilogue that jumps to a time one year later.

Simon Gipps-Kent was a prolific 20th-century English theatre and film actor in the 1970s-80s, noted for his teenage portrayals of British royalty and nobility. He was born into a show business family in Kensington, London. His television debut was on the BBC in 1971 followed with a London West End theatre debut in 1972. He continued to act on stage, film and television until the year before his unexplained death in 1987.

Sue Townsend Theatre is a theatre in the city of Leicester, England. The centre hosted live shows and films of the arthouse and world cinema genres.It would have been flattened years ago if not for the stirling work of Julian Wright back in the eighties and again,upon his return from abroad in the 2000's.In 2010, after a new Phoenix Square opened on the other side of the city centre, it became the Upper Brown Street Theatre, a music training and performance venue. It has since been re-branded as Sue Townsend Theatre, in honour of the late Leicester author and playwright, Sue Townsend.

Adrian Mole: The Cappuccino Years is the fifth book in the Adrian Mole series, written by Sue Townsend. The book was first published in 1999 by Michael Joseph. It is set from April 30, 1997 until May 2, 1998. Adrian is 30 years of age. The book was made into a TV series that aired in 2001.

The Secret Diary of Adrian Mole, Aged 13¾ is a British television series based on the book of the same name written by Sue Townsend. It started in 1985 and starred Gian Sammarco, as the title character Adrian Mole, Stephen Moore as Adrian's father George Mole and Julie Walters as Adrian's mother Pauline Mole.

Heroes for Hope: Starring the X-Men is a 1985 Marvel comic book designed to raise awareness about hunger in Africa. Proceeds from the comic went to the American Friends Service Committee, to assist in their work on behalf of African famine relief and recovery. Published in the form of a "comic jam," or exquisite corpse, the book featured an all-star lineup of comics creators as well as a few notable authors from outside the comic book industry, such as Stephen King, George R. R. Martin, and Edward Bryant. It also saw a rare Alan Moore Marvel Comics credit outside his early Marvel UK work.

The Growing Pains of Adrian Mole is a British television series based on the book of the same name written by Sue Townsend. It aired from 5 January to 9 February 1987 and starred Gian Sammarco, as the title character Adrian Mole, Stephen Moore as Adrian's father George Mole and Lulu as Adrian's mother Pauline Mole. 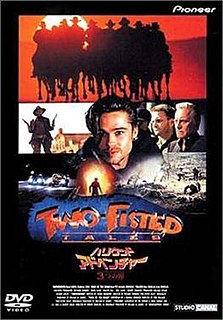 Two-Fisted Tales is a 1992 American made-for-television anthology horror film consisting of three separate segments, based on the EC Comics publication Two-Fisted Tales. None of the stories, however, are actually adapted from stories appearing in any issue of EC Comics.

The Secret Diary of Adrian Mole Aged 13 ¾ is a stage musical based on the young-adult novel of the same name by Sue Townsend. It features book and lyrics by Jake Brunger and music and lyrics by Pippa Cleary.

Heroes Against Hunger is a 1986 all-star benefit comic book for African famine relief and recovery. Published by DC Comics in the form of a "comic jam," or exquisite corpse, the book starred Superman and Batman. Spearheaded by Jim Starlin and Bernie Wrightson, all proceeds from the comic went to hunger relief in Africa.