Thomas A. Reh Ph.D. is an American scientist and author.

His research has been funded through numerous grants from the National Institutes of Health (NIH) and many private foundations, and he has served on several national and international grant review panels, including NIH study sections, and is currently a member of the Scientific Advisory Board of the Foundation Fighting Blindness and of a start-up biotechnology company, Acucela. He has received several awards for his work, including the AHFMR and Sloan Scholar awards. He has published over 100 journal articles, reviews and books, nearly all in the field of retinal regeneration and development.

The zebrafish is a freshwater fish belonging to the minnow family (Cyprinidae) of the order Cypriniformes. Native to South Asia, it is a popular aquarium fish, frequently sold under the trade name zebra danio. It is also found in private ponds. 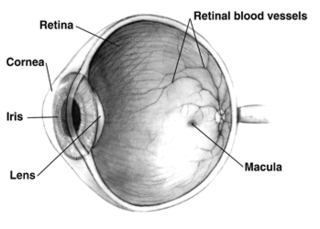 The retina is the innermost, light-sensitive layer of tissue of the eye of most vertebrates and some molluscs. The optics of the eye create a focused two-dimensional image of the visual world on the retina, which translates that image into electrical neural impulses to the brain to create visual perception. The retina serves a function analogous to that of the film or image sensor in a camera.

A retinal ganglion cell (RGC) is a type of neuron located near the inner surface of the retina of the eye. It receives visual information from photoreceptors via two intermediate neuron types: bipolar cells and retina amacrine cells. Retina amacrine cells, particularly narrow field cells, are important for creating functional subunits within the ganglion cell layer and making it so that ganglion cells can observe a small dot moving a small distance. Retinal ganglion cells collectively transmit image-forming and non-image forming visual information from the retina in the form of action potential to several regions in the thalamus, hypothalamus, and mesencephalon, or midbrain. 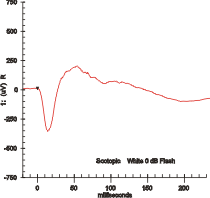 Electroretinography measures the electrical responses of various cell types in the retina, including the photoreceptors, inner retinal cells, and the ganglion cells. Electrodes are placed on the surface of the cornea or on the skin beneath the eye to measure retinal responses. Retinal pigment epithelium (RPE) responses are measured with an EOG test with skin-contact electrodes placed near the canthi. During a recording, the patient's eyes are exposed to standardized stimuli and the resulting signal is displayed showing the time course of the signal's amplitude (voltage). Signals are very small, and typically are measured in microvolts or nanovolts. The ERG is composed of electrical potentials contributed by different cell types within the retina, and the stimulus conditions can elicit stronger response from certain components. 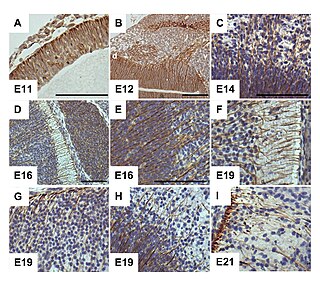 Radial glial cells, or radial glial progenitor cells (RGPs), are bipolar-shaped progenitor cells that are responsible for producing all of the neurons in the cerebral cortex. RGPs also produce certain lineages of glia, including astrocytes and oligodendrocytes. Their cell bodies (somata) reside in the embryonic ventricular zone, which lies next to the developing ventricular system.

Eye formation in the human embryo begins at approximately three weeks into embryonic development and continues through the tenth week. Cells from both the mesodermal and the ectodermal tissues contribute to the formation of the eye. Specifically, the eye is derived from the neuroepithelium, surface ectoderm, and the extracellular mesenchyme which consists of both the neural crest and mesoderm. 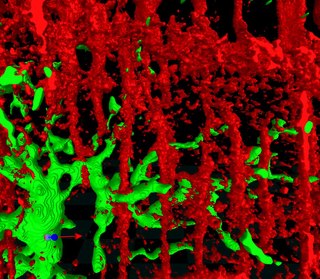 Müller glia, or Müller cells, are a type of retinal glial cells, first recognized and described by Heinrich Müller. They are found in the vertebrate retina, which serve as support cells for the neurons, as all glial cells do. They are the most common type of glial cell found in the retina. While their cell bodies are located in the inner nuclear layer of the retina, they span across the entire retina.

Photoreceptor proteins are light-sensitive proteins involved in the sensing and response to light in a variety of organisms. Some examples are rhodopsin in the photoreceptor cells of the vertebrate retina, phytochrome in plants, and bacteriorhodopsin and bacteriophytochromes in some bacteria. They mediate light responses as varied as visual perception, phototropism and phototaxis, as well as responses to light-dark cycles such as circadian rhythm and other photoperiodisms including control of flowering times in plants and mating seasons in animals. 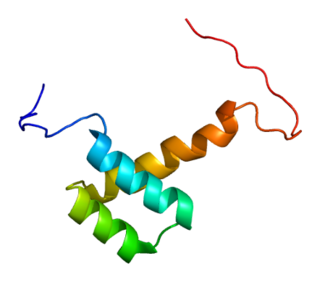 Homeobox protein OTX2 is a protein that in humans is encoded by the OTX2 gene.

Nuclear factor 1 X-type is a protein that in humans is encoded by the NFIX gene. NFI-X3, a splice variant of NFIX, regulates Glial fibrillary acidic protein and YKL-40 in astrocytes. 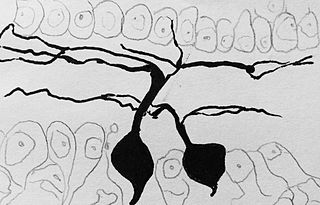 A parasol cell, sometimes called an M cell or M ganglion cell, is one type of retinal ganglion cell (RGC) located in the ganglion cell layer of the retina. These cells project to magnocellular cells in the lateral geniculate nucleus (LGN) as part of the magnocellular pathway in the visual system. They have large cell bodies as well as extensive branching dendrite networks and as such have large receptive fields. Relative to other RGCs, they have fast conduction velocities. While they do show clear center-surround antagonism, they receive no information about color. Parasol ganglion cells contribute information about the motion and depth of objects to the visual system.

Retinal regeneration refers to the restoration of vision in vertebrates that have suffered retinal lesions or retinal degeneration.

Retinal precursor cells are biological cells that differentiate into the various cell types of the retina during development. In the vertebrate, these retinal cells differentiate into seven cell types, including retinal ganglion cells, amacrine cells, bipolar cells, horizontal cells, rod photoreceptors, cone photoreceptors, and Müller glia cells. During embryogenesis, retinal cells originate from the anterior portion of the neural plate termed the eye field. Eye field cells with a retinal fate express several transcription factor markers including Rx1, Pax6, and Lhx2. The eye field gives rise to the optic vesicle and then to the optic cup. The retina is generated from the precursor cells within the inner layer of the optic cup, as opposed to the retinal pigment epithelium that originate from the outer layer of the optic cup. In general, the developing retina is organized so that the least-committed precursor cells are located in the periphery of the retina, while the committed cells are located in the center of the retina. The differentiation of retinal precursor cells into the mature cell types found in the retina is coordinated in time and space by factors within the cell as well as factors in the environment of the cell. One example of an intrinsic regulator of this process is the transcription factor Ath5. Ath5 expression in retinal progenitor cells biases their differentiation into a retinal ganglion cell fate. An example of an environmental factor is the morphogen sonic hedge hog (Shh). Shh has been shown to repress the differentiation of precursor cells into retinal ganglion cells.

Retinal homeobox protein Rx also known as retina and anterior neural fold homeobox is a protein that in humans is encoded by the RAX gene. The RAX gene is located on chromosome 18 in humans, mice, and rats. 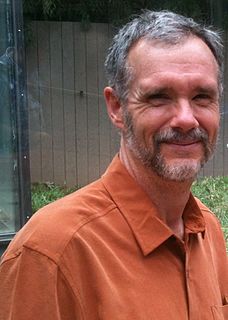 Douglas G. McMahon is a professor of Biological Sciences and Pharmacology at Vanderbilt University. McMahon has contributed several important discoveries to the field of chronobiology and vision. His research focuses on connecting the anatomical location in the brain to specific behaviors. As a graduate student under Gene Block, McMahon identified that the basal retinal neurons (BRNs) of the molluscan eye exhibited circadian rhythms in spike frequency and membrane potential, indicating they are the clock neurons. He became the 1986 winner of the Society for Neuroscience's Donald B. Lindsley Prize in Behavioral Neuroscience for his work. Later, he moved on to investigate visual, circadian, and serotonergic mechanisms of neuroplasticity. In addition, he helped find that constant light can desynchronize the circadian cells in the suprachiasmatic nucleus (SCN). He has always been interested in the underlying causes of behavior and examining the long term changes in behavior and physiology in the neurological modular system. Recently, McMahon helped identify a novel retrograde neurotransmission system in the retina involving the melanopsin ganglion cells in retinal dopaminergic amacrine neurons. 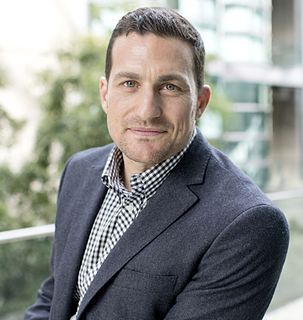 Andrew D. Huberman is an American neuroscientist and tenured professor in the Department of Neurobiology at the Stanford University School of Medicine. He's made many contributions to the brain development, brain plasticity, and neural regeneration and repair fields. Much of his work is focused on the visual system, including the mechanisms controlling light-mediated activation of the circadian and autonomic arousal centers in the brain, as well as brain control over conscious vision or sight.

Sanjeev Anant Galande is an Indian cell biologist, epigeneticist, academic, former Chair of Biology and the Dean of Research and Development at the Indian Institute of Science Education and Research, Pune He heads the Laboratory of Chromatin Biology and Epigenetics at Indian Institute of Science Education and Research, Pune. He is the founder of the Centre of Excellence in Epigenetics at IISER Pune and is known for his studies on higher-order chromatin architecture and how it influences spatiotemporal changes in gene expression. He is an elected fellow of the Indian National Science Academy and the Indian Academy of Sciences and a recipient of the National Bioscience Award for Career Development of the Department of Biotechnology. The Council of Scientific and Industrial Research, the apex agency of the Government of India for scientific research, awarded him the Shanti Swarup Bhatnagar Prize for Science and Technology, one of the highest Indian science awards, in 2010, for his contributions to biological sciences.

Çağhan Kızıl is a Turkish/German neuroscientist and geneticist, who is leading a Helmholtz research group in German Center for Neurodegenerative Diseases within Helmholtz Association. He is also a visiting associate professor at the Taub Institute for Research on Alzheimer's Disease and the Aging Brain at the Columbia University Vagelos College of Physicians and Surgeons Columbia University Irving Medical Center