Thomas Resch (1460-1520) [1] was an Austrian Renaissance humanist. He went by the Latin name of Thomas Velocianus. He was a member of a circle of humanists based in Vienna. This circle included the scholars Georg Tannstetter, Johannes Stabius, Stiborius, Stefan Rosinus (1470-1548), [2] Johannes Cuspinianus, and the reformer Joachim Vadianus. These humanists were associated with the court of Maximilian I, Holy Roman Emperor. [3] Ludwig Alois Friedrich Ritter von Köchel was an Austrian musicologist, writer, composer, botanist and publisher. He is best known for cataloguing the works of Mozart and originating the 'KV-numbers' by which they are known.

Theodor Zwinger the Elder was a Swiss physician and Renaissance humanist scholar. He made significant contributions to the emerging genres of reference and travel literature. He was the first distinguished representative of a prominent Basel academic family. 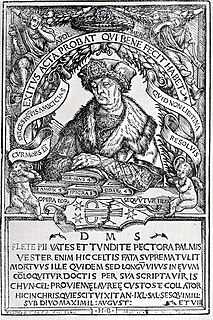 Renaissance humanism was a revival in the study of classical antiquity, at first in Italy and then spreading across Western Europe in the 14th, 15th, and 16th centuries. Contemporary use of the term humanism is consistent with the historical use prominent in that period, while Renaissance humanism is a retronym used to distinguish it from later humanist developments. During the Renaissance period most humanists were religious, so their concern was to "purify and renew Christianity," not to do away with it. Their vision was to return ad fontes to the simplicity of the New Testament, bypassing the complexities of medieval theology. Today, by contrast, the term humanism has come to signify "a worldview which denies the existence or relevance of God, or which is committed to a purely secular outlook." 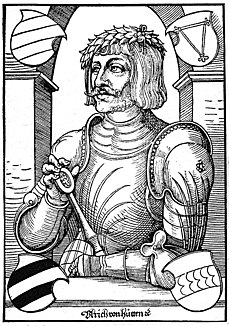 Johannes Honter was a Transylvanian Saxon, renaissance humanist, Protestant reformer, and theologian. Honter is best known for his geographic and cartographic publishing activity, as well as for implementing the Lutheran reform in Transylvania and founding the Evangelical Church of Augustan Confession in Romania.

Joannes Susenbrotus was a German humanist, teacher of Latin, and author of textbooks.

The German Renaissance, part of the Northern Renaissance, was a cultural and artistic movement that spread among German thinkers in the 15th and 16th centuries, which developed from the Italian Renaissance. Many areas of the arts and sciences were influenced, notably by the spread of Renaissance humanism to the various German states and principalities. There were many advances made in the fields of architecture, the arts, and the sciences. Germany produced two developments that were to dominate the 16th century all over Europe: printing and the Protestant Reformation.

Johannes Stabius (1450–1522) was an Austrian cartographer of Vienna who developed, around 1500, the heart-shape (cordiform) projection map later developed further by Johannes Werner. It is called the Werner map projection, but also the Stabius-Werner or the Stab-Werner projection. 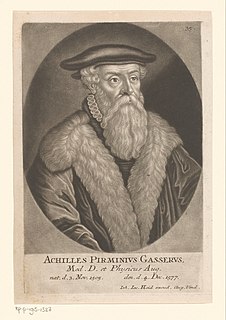 Achilles Pirmin Gasser was a German physician and astrologer. He is now known as a well-connected humanistic scholar, and supporter of both Copernicus and Rheticus.

Giovanni Aurelio Augurello (1441–1524) was an Italian humanist scholar, poet and alchemist. Born at Rimini, he studied both laws in Rome, Florence and Padova where he also consorted with the leading scholars of his time. At Florence he befriended Marsilio Ficino (1433-1499) and Angelo Poliziano (1454-1494) and later while teaching classics in Treviso joined Aldo Mantius' humanist circle in Venice. Apart from his academic and literary work he practically experimented in metallurgy and provided colour pigments for his friend the Hermetic painter Giulio Campagnola He is best known for his 1515 allegorical poem on the making of gold, Chrysopoeia, which was dedicated to Pope Leo X; leading to the famous but forged anecdote that the Pope had rewarded Augurello with a beautiful but empty purse as an alchemist like him should on his own to be capable of replenishing it — he was actually bestowed with a sinecure at the cathedral of Treviso.

Hardwin von Grätz, better known in English as Ortwin, was a German humanist scholar and theologian.

Johannes Murmellius was a Dutch teacher and humanist, known for numerous textbooks, and his spreading of humanism, particularly in the Prince-Bishopric of Münster.

Giovanni Sulpizio da Veroli or Johannes Sulpitius Verulanus or Verolensis was an Italian Renaissance humanist and rhetorician. Known to Erasmus, he was the author of a work on epistolary art, the proper composition and ornamentation of letters, De componendis et ornandis epistoli.

Nikolaus Gerbel was a German humanist, jurist and doctor of both laws.

Humanist minuscule is a handwriting or style of script that was invented in secular circles in Italy, at the beginning of the fifteenth century. "Few periods in Western history have produced writing of such great beauty", observes the art historian Millard Meiss. The new hand was based on Carolingian minuscule, which Renaissance humanists, obsessed with the revival of antiquity and their role as its inheritors, took to be ancient Roman:

[W]hen they handled manuscript books copied by eleventh- and twelfth-century scribes, Quattrocento literati thought they were looking at texts that came right out of the bookshops of ancient Rome".

Conrad Goclenius was a Renaissance humanist, and Latin scholar, and the closest confidant of humanist Desiderius Erasmus, who was born in Mengeringhausen in the Landgraviate of Hesse in 1490, and died in Leuven on January 25, 1539.