Thomas S. Lundgren is an American fluid dynamicist and Professor Emeritus of Aerospace Engineering and Mechanics at the University of Minnesota [1] He is known for his work in the field of theoretical fluid dynamics. In 2006, Lundgren received Fluid Dynamics Prize by the American Physical Society "for his insightful theoretical contributions to numerous areas of fluid mechanics, most notably in the fields of turbulence and vortex dynamics" [2]

Lundgren received his B.S. and M.S. degrees in Aeronautical Engineering from University of Minnesota in 1954 and 1956 respectively. He then received his Ph.D. in fluid mechanics from the same institute in 1960. Lundgren is a Fellow of American Physical Society since 1994. [3]

Parviz Moin is a fluid dynamicist. He is the Franklin P. and Caroline M. Johnson Professor of Mechanical Engineering at Stanford University. Moin has been listed as an ISI Highly Cited author in engineering.

Howard Alvin Stone is the Donald R. Dixon '69 and Elizabeth W. Dixon Professor in Mechanical and Aerospace Engineering at Princeton University. His field of research is in fluid mechanics, chemical engineering and complex fluids. He became an Editor of the Annual Review of Fluid Mechanics in 2021. 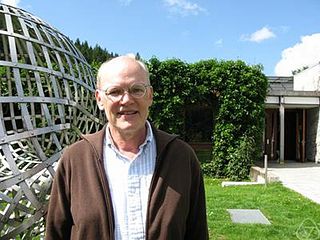 Jerrold Eldon Marsden was a Canadian mathematician. He was the Carl F. Braun Professor of Engineering and Control & Dynamical Systems at the California Institute of Technology. Marsden is listed as an ISI highly cited researcher.

Hassan Aref, was the Reynolds Metals Professor in the Department of Engineering Science and Mechanics at Virginia Tech, and the Niels Bohr Visiting Professor at the Technical University of Denmark.

Henry Keith Moffatt, FRS FRSE is a Scottish mathematician with research interests in the field of fluid dynamics, particularly magnetohydrodynamics and the theory of turbulence. He was Professor of Mathematical Physics at the University of Cambridge from 1980 to 2002.

Daniel Donald Joseph was an American mechanical engineer. He was the Regents Professor Emeritus and Russell J. Penrose Professor Emeritus of Department of Aerospace Engineering and Mechanics at the University of Minnesota. He was widely known for his research in fluid dynamics.

Leslie Gary Leal is the Warren & Katharine Schlinger Professor of Chemical Engineering at the University of California, Santa Barbara. He is known for his research work in the dynamics of complex fluids.

Stephen Howard Davis was an American applied mathematician working in the fields of fluid mechanics and materials science. Davis was the McCormick School Institute Professor and the Walter P. Murphy Professor of Applied Mathematics at Northwestern University. Davis has been listed as an ISI Highly Cited researcher in Engineering. His work was acknowledged in festschrifts in 2002.

William Kenneth George is an American-born fluid dynamicist holding both American and Swedish citizenships. He is currently Senior Research Investigator in the Department of Aeronautics at Imperial College London. George is known for his research on both theoretical and experimental turbulence.

Stanley Corrsin was an American physicist, fluid dynamicist, and Theophilus Halley Smoot Professor of Engineering at the Johns Hopkins University. He was known for his contributions in the field of fluid dynamics in general and turbulence in particular. He was a recipient of Fluid Dynamics Prize in 1983. Corrsin died of cancer on 2 June 1986 at the age of 66.

Owen Martin Phillips was a U.S. physical oceanographer and geophysicist who spent most of his career at the Johns Hopkins University.

Howard Brenner was a professor emeritus of chemical engineering at Massachusetts Institute of Technology. His research profoundly influenced the field of fluid dynamics, and his research contribution to fundamental principles of fluid dynamics has been deeply honored. His first textbook, Low Reynolds Number Hydrodynamics, earned him a reputation lasting several decades. His profession though fundamental research is on microfluidics, complex liquids, interfacial transport process, emulsion rheology, and multiphase flows.

Viswanathan Kumaran is an Indian chemical engineer, rheologist and a professor at the Department of Chemical Engineering of the Indian Institute of Science. He is known for his studies on stability of flow past flexible surfaces and is an elected fellow of the Indian Academy of Sciences, Indian National Science Academy and the Indian National Academy of Engineering. The Council of Scientific and Industrial Research, the apex agency of the Government of India for scientific research, awarded him the Shanti Swarup Bhatnagar Prize for Science and Technology, one of the highest Indian science awards for his contributions to Engineering Sciences in 2000. A recipient of the TWAS Prize in 2014 and the Infosys Prize 2016 in the Engineering and Computer Science category, Kumaran was listed in the Asian Scientist 100, a list of top 100 scientists from Asia, by the Asian Scientist magazine.

Ronald G. Larson is George G. Brown Professor of Chemical Engineering and Alfred H. White Distinguished University Professor at the University of Michigan, where he holds joint appointments in Macromolecular Science and Engineering, Biomedical Engineering, and Mechanical Engineering. He is internationally recognized for his research contributions to the fields of polymer physics and complex fluid rheology, especially in the development of theory and computational simulations. Notably, Larson and collaborators discovered new types of viscoelastic instabilities for polymer molecules and developed predictive theories for their flow behavior. He has written numerous scientific papers and two books on these subjects, including a 1998 textbook, “The Structure and Rheology of Complex Fluids”.

Ellen Kathryn Longmire is an American applied physicist and mechanical engineer known for her research in experimental fluid dynamics and turbulence. She is a professor of aerospace engineering and mechanics at the University of Minnesota, where she is also Associate Dean for Academic Affairs in the College of Science & Engineering,, the former chair of the American Physical Society Division of Fluid Dynamics, and one of three editors-in-chief of the journal Experiments in Fluids.