Thomas S. Monahan is the President and CEO of CIBC Mellon (as of November 2, 2009 [1] ) succeeding Thomas C. MacMillan. Mr. Monahan is a native of Montreal, Quebec and has a bachelor of commerce degree from the McGill University Desautels Faculty of Management, and a degree from Vanier College.

Thomas Carey MacMillan was the longest serving President and CEO of CIBC Mellon, and a Canadian businessman.

A Bachelor of Commerce is an undergraduate degree in commerce and related subjects, usually awarded in Canada, Australia, India, Ireland, New Zealand, Pakistan, South Africa, Myanmar and other Commonwealth countries; however, the degree is no longer offered in the United Kingdom.

Prior to joining CIBC Mellon, Mr. Monahan was National Sales Manager for CIBC Wood Gundy and Managing Director of CIBC World Markets from 1995-1999. From 1999 Mr. Monahan served as Head of CIBC Wood Gundy. He was named Chair and Chief Executive Officer of CIBC Investor Services in October 2002. [1] He has also worked at the Montreal Stock Exchange and Merril Lynch Canada.

CIBC Wood Gundy is the Canadian full-service retail brokerage division of CIBC World Markets Inc., a subsidiary of the Canadian Imperial Bank of Commerce (CIBC). Through its network of over 1,000 investment advisors working in 80 locations across Canada, CIBC Wood Gundy offers an array of investment and insurance products and services.

The Canadian Imperial Bank of Commerce, commonly referred to as CIBC, is one of the "Big Five" banks in Canada. The bank is headquartered at Commerce Court in Toronto, Ontario. CIBC's Institution Number is 010, and its SWIFT code is CIBCCATT. It is also one of the two major banks originally founded in Toronto alongside Toronto-Dominion Bank.

CIBC Wealth Management is the brokerage division of the Canadian Imperial Bank of Commerce (CIBC). The CIBC prefers to use phrases like "wealth-building" and "wealth management" to describe its investment services. Like most banks, their financial products include stocks, bonds, mutual funds, managed portfolios, guaranteed investments, and credit. And like most retail businesses, they give free advice to their customers on what to buy. 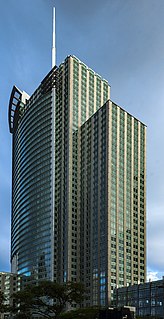 1250, boulevard René-Lévesque is a 226-metre (741 ft), 47-story skyscraper in Montreal, Quebec, Canada. The building was designed by Kohn Pedersen Fox Associates for IBM Canada and Marathon Realty, hence the former name "IBM-Marathon Tower". It is now named for its address at 1250 René Lévesque Boulevard West, in the Ville-Marie borough of Downtown Montreal. It is adjacent to the Bell Centre and Windsor Station to the south, and stands on the site of the former American Presbyterian Church. It is connected to the Bonaventure metro station and the underground city network.

Gerald T. McCaughey is a Canadian businessman who was formerly president and CEO of the Canadian Imperial Bank of Commerce.

Charles Sirois, is a Canadian businessman. He is the founder, controlling shareholder, chairman and CEO of Telesystem Ltd., a Canadian private equity company. Effective from March 1, 2017, he has been appointed as the CEO and chairman of OnMobile Global Ltd, India

Richard William Nesbitt is a Canadian financial executive. Is currently the president and CEO of Global Risk Institute in Financial Services. In addition he is also an Adjunct Professor at the Rotman School of Management of the University of Toronto where he teaches a course at the Rotman School of Management, entitled "How Banks Work: Management in a New Regulatory Age". Richard is also chair of the Advisory Board of the Mind Brain Behaviour Hive at the same University.

Robert Mehrabian is an Armenian-American materials scientist and the Executive Chairman of Teledyne Technologies Incorporated (TDY). He assumed this position January 1, 2019. He was Chairman, President and Chief Executive Officer of the company from 2000 to December 31, 2018 and President and Chief Executive Officer from 1999 to 2000. Mehrabian held various Senior Executive positions at Allegheny Teledyne Incorporated (ATI) starting in July 1997, prior to the spin-off of Teledyne Technologies Incorporated in November 1999. Previously he was President of Carnegie Mellon University from 1990 to 1997. He has served on the board of directors of several public companies, including Mellon Financial Corporation and its successor, Bank of New York Mellon Corporation (1994-2011) and PPG Industries, Inc. (1992-2014).

CIBC is the Canadian Imperial Bank of Commerce.

Brian Shaw, CFA, is a Canadian financial industry executive with particular expertise in capital market and investing activities, and is a private investor and corporate advisor. He was the Chairman and CEO of CIBC World Markets from 2005 through 2008 and prior to that managed the Global Equities Division for a number of years. He is currently a Corporate Director for Encana Corporation, as well as NuVista Energy Ltd., Manulife Bank of Canada, Manulife Trust Company and Ivey Canadian Exploration Ltd..

Anthony Richard Graham is a Canadian businessman based in Toronto, Canada. He is presently Vice-Chairman and a Director of Wittington Investments, Limited and President and Chief Executive Officer of Sumarria Inc.

Joseph William "Jay" Monahan IV is the fourth and current commissioner of golf's PGA Tour; he ascended to the office in January 2017.