The Bachelor of Commerce degree [1] is designed to provide students with a wide range of managerial skills, while building competence in a particular area of business [2] (see aside). For a comparison with other business degrees, see Business education § Undergraduate education.

Most universities, therefore, plan the degree such that in addition to their major, students are exposed to general business principles, taking courses in accounting, finance, economics, business management, human resources and marketing. Programs often require foundational courses in business statistics and mathematics, and information systems.

Depending on the institution, a formal academic major may or may not be established. Regardless, a Bachelor of Commerce degree [3] requires students to take the majority of their courses in business-related subjects, including the aside, among others.

The Honours Bachelor of Commerce (HonsBCom or BComm (Hons) or HBCom or HBComm) is further advanced. The degree has a specialization aspect, analogous to the BBA, developing the student's business skills and/or providing in-depth knowledge of the field.

It requires additional academic courses to be completed, and usually with higher academic performance standards, and may also require a researched thesis component. It often serves as an abridgement (or entry requirement) between the undergraduate program and postgraduate programs, including the Master of Commerce (M.Com. or M.Comm.) and the Master of Business Administration (MBA) degrees.

The curriculum generally lasts three years in Australia, New Zealand, India, [10] Malta, South Africa, some parts of Canada, and Hong Kong. The curriculum requires four years of study in the Republic of Ireland, the majority of Canada, Egypt, Ghana, Pakistan, the Philippines, the Netherlands, Sri lanaka and Nepal.

A Bachelor of Education (B.Ed.) is an undergraduate professional degree which prepares students for work as a teacher in schools. In some countries such as Tanzania and Kenya, additional tasks like field work and research are required in order for the student to be fully qualified to teach. It may also be accompanied with or followed by tests for licenses or certifications required for teachers in some areas.

Bachelor of Laws is an undergraduate law degree in the United Kingdom and most common law jurisdictions. Bachelor of Laws is also the name of the law degree awarded by universities in the People's Republic of China, Hong Kong S.A.R., Macau S.A.R., Malaysia, Bangladesh, India, Japan, Pakistan, Kenya, Ghana, Nigeria, South Africa, Botswana, Israel, Brazil, Tanzania, Zambia, and many other jurisdictions.

The Bachelor of Business Science (BBusSci) is a four-year honours level degree providing for a scientifically based study of economic and management sciences, "premised on the application of quantitative methods". The degree is offered in South Africa, and elsewhere in the Commonwealth.

Business education is a branch of education that involves teaching the skills and operations of the business industry. This field of education occurs at multiple levels, including secondary and higher education 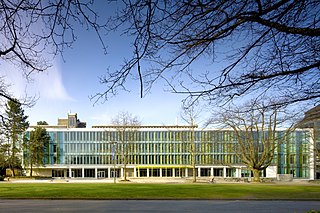 The UBC Sauder School of Business is a faculty at the University of British Columbia. The faculty is located in Vancouver on UBC's Point Grey campus and has a secondary teaching facility at UBC Robson Square downtown. UBC Sauder is accredited by AACSB.

A Bachelor of Business is a three to four year undergraduate degree in the field of business offered by traditional and newer universities from the post-Dawkins era in Australia, New Zealand and Ireland. It is similar in format and structure to a Bachelor of Commerce (BCom).

Master of Commerce is a postgraduate master's degree focusing on commerce-, accounting-, management- and economics-related subjects. Like the undergraduate Bachelor of Commerce, the degree is mainly offered in Commonwealth nations; it is also offered in Spain and some states in Latin America.

The Bachelor of Economics is a four-year undergraduate degree in economic theory, econometrics and applied economics; other titles are Bachelor in Economic Sciences (BEconSc) and Bachelor of Applied Economics. Specialized economics degrees are also offered as a BA (Econ), BSc (Econ), BCom (Econ), BSocSc (Econ); these degrees may span three years. The curriculum is (substantially) more theoretical and mathematical than the major in economics available generally.

The School of Open Learning (SOL) is a constituent college of the University of Delhi. It was established in 1962, and offers programmes in humanities, social sciences and commerce.