International trade is the exchange of capital, goods, and services across international borders or territories. [1]

In most countries, such trade represents a significant share of gross domestic product (GDP). While international trade has existed throughout history (for example Uttarapatha, Silk Road, Amber Road, scramble for Africa, Atlantic slave trade, salt roads), its economic, social, and political importance has been on the rise in recent centuries.

Carrying out trade at an international level is a complex process when compared to domestic trade. When trade takes place between two or more nations factors like currency, government policies, economy, judicial system, laws, and markets influence trade.

A product that is transferred or sold from a party in one country to a party in another country is an export from the originating country, and an import to the country receiving that product. Imports and exports are accounted for in a country's current account in the balance of payments. [2]

Trading globally may give consumers and countries the opportunity to be exposed to new markets and products. Almost every kind of product can be found in the international market, for example: food, clothes, spare parts, oil, jewellery, wine, stocks, currencies, and water. Services are also traded, such as in tourism, banking, consulting, and transportation.

International trade is, in principle, not different from domestic trade as the motivation and the behavior of parties involved in a trade do not change fundamentally regardless of whether trade is across a border or not.

However, in practical terms, carrying out trade at an international level is typically a more complex process than domestic trade. The main difference is that international trade is typically more costly than domestic trade. This is due to the fact that a border typically imposes additional costs such as tariffs, time costs due to border delays, and costs associated with country differences such as language, the legal system, or culture (non-tariff barriers).

Another difference between domestic and international trade is that factors of production such as capital and labor are often more mobile within a country than across countries. Thus, international trade is mostly restricted to trade in goods and services, and only to a lesser extent to trade in capital, labour, or other factors of production. Trade in goods and services can serve as a substitute for trade in factors of production. Instead of importing a factor of production, a country can import goods that make intensive use of that factor of production and thus embody it. An example of this is the import of labor-intensive goods by the United States from China. Instead of importing Chinese labor, the United States imports goods that were produced with Chinese labor. One report in 2010 suggested that international trade was increased when a country hosted a network of immigrants, but the trade effect was weakened when the immigrants became assimilated into their new country. [3]

The history of international trade chronicles notable events that have affected trading among various economies.

There are several models which seek to explain the factors behind international trade, the welfare consequences of trade and the pattern of trade.

The following table is a list of the 21 largest trading nations according to the World Trade Organization. [4] [ failed verification ]

A single market is a type of trade bloc in which most trade barriers have been removed with some common policies on product regulation, and freedom of movement of the factors of production and of enterprise and services. The goal is that the movement of capital, labour, goods, and services between the members is as easy as within them. The physical (borders), technical (standards) and fiscal (taxes) barriers among the member states are removed to the maximum extent possible. These barriers obstruct the freedom of movement of the four factors of production. 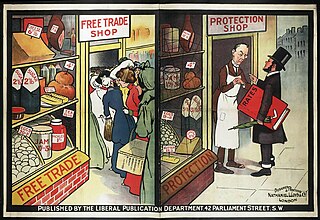 Protectionism is the economic policy of restricting imports from other countries through methods such as tariffs on imported goods, import quotas, and a variety of other government regulations. Proponents claim that protectionist policies shield the producers, businesses, and workers of the import-competing sector in the country from foreign competitors. However, they also reduce trade and adversely affect consumers in general, and harm the producers and workers in export sectors, both in the country implementing protectionist policies and in the countries protected against.

An export in international trade is a good or service produced in one country that is bought by someone in another country. The seller of such goods and services is an exporter; the foreign buyer is an importer.

Non-tariff barriers to trade (NTBs) or sometimes called "Non-Tariff Measures (NTMs)" are trade barriers that restrict imports or exports of goods or services through mechanisms other than the simple imposition of tariffs.

The Harmonized Commodity Description and Coding System, also known as the Harmonized System (HS) of tariff nomenclature is an internationally standardized system of names and numbers to classify traded products. It came into effect in 1988 and has since been developed and maintained by the World Customs Organization (WCO), an independent intergovernmental organization based in Brussels, Belgium, with over 200 member countries.

Market access describes the possibility of an enterprise or a country to sell their goods and services across borders and enter a foreign market. According to the World Trade Organization (WTO), "market access for goods in the WTO means the conditions, tariff and non-tariff measures, agreed by members for the entry of specific goods into their markets." Gaining market access is an indispensable step towards deepening trade relations. However, market access is not synonymous with free trade because the possibility to enter a foreign market is in most cases conditioned by certain requirements, whereas free trade implies a perfect state in which goods and services can be circulated across borders without such barriers. Indeed, tackling market access restrictions proves to be a more achievable goal for trade negotiations as compared to free trade.

Trade facilitation looks at how procedures and controls governing the movement of goods across national borders can be improved to reduce associated cost burdens and maximise efficiency while safeguarding legitimate regulatory objectives. Business costs may be a direct function of collecting information and submitting declarations or an indirect consequence of border checks in the form of delays and associated time penalties, forgone business opportunities and reduced competitiveness 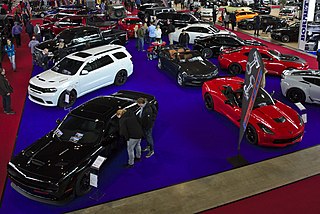 An import is goods brought into a jurisdiction, especially across a national border, from an external source. The party bringing in the good is called an importer. An import in the receiving country is an export from the sending country. Importation and exportation are the defining financial transactions of international trade.

Success in export markets for developed and developing country firms is increasingly affected by the ability of countries to support an environment which promotes efficient and low cost trade services and logistics. Policies related to trade facilitation and economic development reflect the idea that trade can be a powerful engine for accelerating economic growth, job creation, and poverty reduction.

An Eco-tariff, also known as an environmental tariff, is a trade barrier erected for the purpose of reducing pollution and improving the environment. These trade barriers may take the form of import or export taxes on products that have a large carbon footprint or are imported from countries with lax environmental regulations.

The ASEAN–India Free Trade Area (AIFTA) is a free trade area among the ten member states of the Association of Southeast Asian Nations (ASEAN) and India. The initial framework agreement was signed on 8 October 2003 in Bali, Indonesia. and the final agreement was on 13 August 2009. The free trade area came into effect on 1 January 2010. India hosted the latest ASEAN-India Commemorative Summit in New Delhi on 26 January 2018. In the financial year 2017-18, Indo-ASEAN bilateral trade grew by almost 14% to reach US$81.3 billion. India's imports from ASEAN were valued at US$47.13 billion while its exports to ASEAN stood at US$34.2 billion.

This article covers topics relating to the foreign trade of Pakistan. For a more general overview, see economy of Pakistan.

Data on the value of exports and imports and their quantities often broken down by detailed lists of products are available in statistical collections on international trade published by the statistical services of intergovernmental and supranational organisations and national statistical institutes. The definitions and methodological concepts applied for the various statistical collections on international trade often differ in terms of definition (e.g. special trade vs. general trade) and coverage (reporting thresholds, inclusion of trade in services, estimates for smuggled goods and cross-border provision of illegal services). Metadata providing information on definitions and methods are often published along with the data.