Last updated July 28, 2020
For other uses, see Export (disambiguation).
A good or service produced in one country that is sold into another country

An export in international trade is a good or service produced in one country that is sold into another country. [1] The seller of such goods and services is an exporter; the foreign buyer is an importer. [2]

Export of goods often requires the involvement of customers authorities. From the buyer's point of view an export is an import.

Many manufacturing firms begin their global expansion as exporters and only later switch to another mode for serving a foreign market. [3]

Methods of exporting a product, goods or information include mail, hand delivery, air shipping, shipping by vessel, uploading to the Internet, or downloading from a website.

International agreements limit trade-in and the transfer of certain types of goods and information, e.g., goods associated with weapons of mass destruction, advanced telecommunications, arms and torture and also some art and archaeological artifacts. For example:

A tariff is a tax placed on a specific good or set of goods exported from or imported to a countryside, creating an economic barrier to trade. [7] A tariff may be used when domestic producers are having difficulty competing with imports. Tariffs may also be used to protect an industry that the country views as a matter of its national security. Some industries receive protection that has a similar effect to subsidies; tariffs reduce the industry's incentives to produce goods quicker, cheaper, and more efficiently, becoming ever less competitive.

The third basis for a tariff involves dumping. When a producer exports at a loss, its competitors may term this dumping. Another case is when the exporter prices a good lower in the export market than in its domestic market. [8] The purpose and expected outcome of a tariff is to encourage spending on domestic goods and services rather than their imported equivalents.

Tariffs can create tension between countries. Examples include the United States steel tariff of 2002, and when China placed a 14% tariff on imported auto parts. Such tariffs usually lead to a complaint with the World Trade Organization (WTO) which sets rules and attempts to resolve trade conflicts. [9] If that is unsatisfactory, the exporting country may choose to put a tariff of its own on imports from the other nation.

Exporting avoids the cost of establishing manufacturing operations in the target country. [10]

Exporting may help a company achieve experience curve effects and location economies in their home country. [10] Ownership advantages include the firm's assets, international experience, and the ability to develop either low-cost or differentiated products. The locational advantages of a particular market are a combination of costs, market potential and investment risk. Internationalization advantages are the benefits of retaining a core competence within the company and threading it though the value chain rather than to license, outsource, or sell it.

In relation to the eclectic paradigm, companies with meager ownership advantages do not enter foreign markets. If the company and its products are equipped with ownership advantage and internalization advantage, they enter through low-risk modes such as exporting. Exporting requires significantly less investment than other modes, such as direct investment. Export's lower risk typically reduces the rate of return on sales versus other modes. Exporting allows managers to exercise production control, but does not provide them the option to exercise as much marketing control. An exporter enlists various intermediaries to manage marketing management and marketing activities.

Exporting may not be viable unless appropriate locations can be found abroad. [3]

Another drawback is that trade barriers can make exporting uneconomical and risky. [3]

For small and medium-sized enterprises (SMEs) with fewer than 250 employees, export is generally more difficult than serving the domestic market. The lack of knowledge of trade regulations, cultural differences, different languages and foreign-exchange situations, as well as the strain of resources and staff, complicate the process. Two-thirds of SME exporters pursue only one foreign market. [11]

In macroeconomics, net exports (exports minus imports) are a component of gross domestic product, along with domestic consumption, physical investment, and government spending. Foreign demand for a country's exports depends positively on income in foreign countries and negatively on the strength of the producing country's currency (i.e., on how expensive it is for foreign customers to buy the producing country's currency in the foreign exchange market).

Non-tariff barriers to trade (NTBs) or sometimes called "Non-Tariff Measures (NTMs)" are trade barriers that restrict imports or exports of goods or services through mechanisms other than the simple imposition of tariffs.

Company competition, or competitiveness, pertains to the ability and performance of a firm, sub-sector or country to sell and supply goods and services in a given market, in relation to the ability and performance of other firms, sub-sectors or countries in the same market. It involves one company trying to figure out how to take away market share from another company.

Trade can be a key factor in economic development. The prudent use of trade can boost a country's development and create absolute gains for the trading partners involved. Trade has been touted as an important tool in the path to development by prominent economists. However trade may not be a panacea for development as important questions surrounding how free trade really is and the harm trade can cause domestic infant industries to come into play.

International business refers to the trade of goods, services, technology, capital and/or knowledge across national borders and at a global or transnational scale. 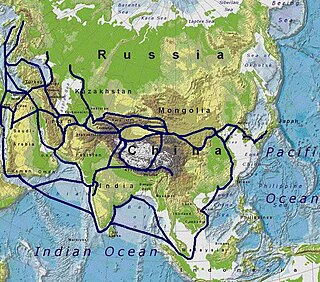 Market access describes the possibility of an enterprise or a country to sell their goods and services across borders and enter a foreign market. According to the World Trade Organization (WTO), "market access for goods in the WTO means the conditions, tariff and non-tariff measures, agreed by members for the entry of specific goods into their markets." Gaining market access is an indispensable step towards deepening trade relations. However, market access is not synonymous with free trade because the possibility to enter a foreign market is in most cases conditioned by certain requirements, whereas free trade implies a perfect state in which goods and services can be circulated across borders without such barriers. Indeed, tackling market access restrictions proves to be a more achievable goal for trade negotiations as compared to free trade.

Foreign market enter modes'or participation strategies differ in the degree of risk they present, the control and commitment of resources they require, and the return on investment they promise.

Trade policy of South Korea. In 1945 Korea was liberated from the Empire of Japan at the end of World War II. A destructive drought in 1958 forced Korea to import large amounts of food grains. In 1950, the Korean war broke out, which destroyed more than two-thirds of the nation's production facilities and most of its infrastructure. Trade policy of South Korea has taken many shifts, from import substitution to globalization and there has been significant impact on the economy for the same.

A destination-based cash flow tax (DBCFT) is a form of border adjustment tax (BAT) that was proposed in the United States by the Republican Party in their 2016 policy paper "A Better Way — Our Vision for a Confident America", which promoted a move to the tax. It has been described by some sources as simply a form of import tariff, while others have argued that it has different consequences than those of a simple tariff.