A company can be created as a legal person so that the company itself has limited liability as members perform or fail to discharge their duty according to the publicly declared incorporation, or published policy. When a company closes, it may need to be liquidated to avoid further legal obligations.

Companies may associate and collectively register themselves as new companies; the resulting entities are often known as corporate groups.

One can define a company as an "artificial person", invisible, intangible, created by or under law, [1] with a discrete legal personality, perpetual succession, and a common seal. Except for some senior positions, companies remain unaffected by the death, insanity, or insolvency of an individual member.

The English word company has its origins in the Old French term compagnie (first recorded in 1150), meaning a "society, friendship, intimacy; body of soldiers", [2] which came from the Late Latin word companio ("one who eats bread with you"), first attested in the Lex Salica (English: Salic Law) (c. 500 CE) as a calque of the Germanic expression gahlaibo (literally, "with bread"), related to Old High German galeipo ("companion") and to Gothic gahlaiba ("messmate").

Companies around the world

See also: List of companies of the United Kingdom

In English law and in legal jurisdictions based upon it, a company is a body corporate or corporation company registered under the Companies Acts or under similar legislation. [7] Common forms include:

In the United Kingdom, a partnership is not legally a company, but may sometimes be referred to (informally) as a "company". It may be referred to as a "firm".

Further information: List of companies of the United States by state

In the United States, a company may be a "corporation, partnership, association, joint-stock company, trust, fund, or organized group of persons, whether incorporated or not, and (in an official capacity) any receiver, trustee in bankruptcy, or similar official, or liquidating agent, for any of the foregoing". [8] [9] In the US, a company is not necessarily a corporation. [10]

Less common types of companies are:

When "Ltd" is placed after the company's name, it signifies a limited company, and "PLC" (public limited company) indicates that its shares are widely held. [13]

In the legal context, the owners of a company are normally referred to as the "members". In a company limited or unlimited by shares (formed or incorporated with a share capital), this will be the shareholders. In a company limited by guarantee, this will be the guarantors. Some offshore jurisdictions have created special forms of offshore company in a bid to attract business for their jurisdictions. Examples include "segregated portfolio companies" and restricted purpose companies.

There are, however, many, many sub-categories of types of company that can be formed in various jurisdictions in the world.

In law, a legal person is any person or 'thing' that can do the things an everyday person can usually do in law – such as enter into contracts, sue and be sued, own property, and so on. The reason for the term "legal person" is that some legal persons are not people: companies and corporations are "persons" legally speaking, but they are clearly not people in the ordinary sense.

A partnership is an arrangement where parties, known as business partners, agree to cooperate to advance their mutual interests. The partners in a partnership may be individuals, businesses, interest-based organizations, schools, governments or combinations. Organizations may partner to increase the likelihood of each achieving their mission and to amplify their reach. A partnership may result in issuing and holding equity or may be only governed by a contract.

A joint venture is a business entity created by two or more parties, generally characterized by shared ownership, shared returns and risks, and shared governance. Companies typically pursue joint ventures for one of four reasons: to access a new market, particularly emerging markets; to gain scale efficiencies by combining assets and operations; to share risk for major investments or projects; or to access skills and capabilities. Work by Reuer and Leiblein challenged the claim that joint ventures minimize downside risk.

A limited liability partnership (LLP) is a partnership in which some or all partners have limited liabilities. It therefore can exhibit elements of partnerships and corporations. In an LLP, each partner is not responsible or liable for another partner's misconduct or negligence. This is an important difference from the traditional partnership under the UK Partnership Act 1890, in which each partner has joint liability. In an LLP, some or all partners have a form of limited liability similar to that of the shareholders of a corporation. Unlike corporate shareholders, the partners have the right to manage the business directly. In contrast, corporate shareholders must elect a board of directors under the laws of various state charters. The board organizes itself and hires corporate officers who then have as "corporate" individuals the legal responsibility to manage the corporation in the corporation's best interest. An LLP also contains a different level of tax liability from that of a corporation.

A private limited company is a type of business entity in "private" ownership used in many jurisdictions, in contrast to "public" ownership, with some differences from country to country. Examples include LLC in the United States, private company limited by shares in the United Kingdom, GmbH in Germany, société à responsabilité limitée in France or sociedad de responsabilidad limitada in the Spanish-speaking world. The benefit of having a private limited company is that there is limited liabilities and depending on each one’s point of view this next point could either be a benefit or a disadvantage. Shares can only be sold to shareholders in the business that means that it can be difficult to liquidate them.

A privately held company, private company, or close corporation is a corporation that is not owned by the government, non-governmental organizations or by a relatively small number of shareholders or company members which does not offer or trade its company stock (shares) to the general public on the stock market exchanges, but rather the company's stock is offered, owned and traded or exchanged privately or over-the-counter. More ambiguous terms for a privately held company are closely held corporation, unquoted company, and unlisted company.

Associations in English law are groups of people which are formed and act for a common purpose. In the United Kingdom, English and Scots law differ in the rules of contract and property, although a number of Acts of Parliament regarding associations are common to both jurisdictions. The five main types of association in English law are: 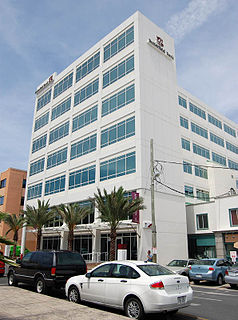