In macroeconomics, chartalism is a theory of money that argues that money originated historically with states' attempts to direct economic activity rather than as a spontaneous solution to the problems with barter or as a means with which to tokenize debt, [1] and that fiat currency has value in exchange because of sovereign power to levy taxes on economic activity payable in the currency they issue.

Georg Friedrich Knapp, a German economist, invented the term "chartalism" in his State Theory of Money, which was published in German in 1905 and translated into English in 1924. The name derives from the Latin charta , in the sense of a token or ticket. [2] Knapp argued that "money is a creature of law" rather than a commodity. [3] Knapp contrasted his state theory of money with "metallism", as embodied at the time in the gold standard, where the value of a unit of currency depended on the quantity of precious metal it contained or could be exchanged for. He argued the state could create pure paper money and make it exchangeable by recognising it as legal tender, with the criterion for the money of a state being "that which is accepted at the public pay offices". [3]

Constantina Katsari has argued that principles from both metallism and chartalism were reflected in the monetary system introduced by Augustus, which was used in the eastern provinces of the Roman Empire, from the early 1st century to the late 3rd century AD. [4] [5]

When Knapp was writing, the prevailing view of money was that it had evolved from systems of barter to become a medium of exchange because it represented a durable commodity which had some use value. However, as modern chartalist economists such as Randall Wray and Mathew Forstater have pointed out, chartalist insights into tax-driven paper money can be found in the earlier writings of many classical economists, [6] [7] for instance Adam Smith, who observed in The Wealth of Nations :

A prince, who should enact that a certain proportion of his taxes should be paid in a paper money of a certain kind, might thereby give a certain value to this paper money; even though the term of its final discharge and redemption should depend altogether on the will of the prince

— Adam Smith, An Inquiry into the Nature and Causes of the Wealth of Nations

Alfred Mitchell-Innes, writing in 1914, argued that money existed not as a medium of exchange but as a standard of deferred payment, with government money being debt the government could reclaim by taxation. [8] Innes argued:

Whenever a tax is imposed, each taxpayer becomes responsible for the redemption of a small part of the debt which the government has contracted by its issues of money, whether coins, certificates, notes, drafts on the treasury, or by whatever name this money is called. He has to acquire his portion of the debt from some holder of a coin or certificate or other form of government money, and present it to the Treasury in liquidation of his legal debt. He has to redeem or cancel that portion of the debt...The redemption of government debt by taxation is the basic law of coinage and of any issue of government ‘money’ in whatever form.

Knapp and "Chartalism" were referenced by John Maynard Keynes in the opening pages of his 1930 Treatise on Money [9] and appear to have influenced Keynesian ideas on the role of the state in the economy. [6] By 1947, when Abba Lerner wrote his article "Money as a Creature of the State", economists had largely abandoned the idea that the value of money was closely linked to gold. [10] Lerner argued that responsibility for avoiding inflation and depressions lay with the state because of its ability to create or tax away money. [10]

Mitchell, founder of the Centre of Full Employment and Equity or CofFEE at the University of Newcastle in Australia, coined the term Modern Monetary Theory to describe modern Neo-Chartalism, and that term is now widely used. Scott Fullwiler has added detailed technical analysis of the banking and monetary systems. [12]

Some contemporary proponents, such as Wray, situate chartalism within post-Keynesian economics, while chartalism has been proposed as an alternative or complementary theory to monetary circuit theory, both being forms of endogenous money, i.e., money created within the economy, as by government deficit spending or bank lending, rather than from outside, as by gold. In the complementary view, chartalism explains the "vertical" (government-to-private and vice versa) interactions, while circuit theory is a model of the "horizontal" (private-to-private) interactions. [14] [15]

Hyman Minsky seemed to incorporate a Chartalist approach to money creation in his Stabilizing an Unstable Economy, [16] while Basil Moore, in his book Horizontalists and Verticalists, [17] delineates the differences between bank money and state money.

In economics, an optimum currency area (OCA) or optimal currency region (OCR) is a geographical region in which it would maximize economic efficiency to have the entire region share a single currency.

Metallism is the economic principle that the value of money derives from the purchasing power of the commodity upon which it is based. The currency in a metallist monetary system may be made from the commodity itself or it may use tokens redeemable in that commodity. Georg Friedrich Knapp (1842–1926) coined the term "metallism" to describe monetary systems using coin minted in silver, gold or other metals.

Credit theories of money, also called debt theories of money, are monetary economic theories concerning the relationship between credit and money. Proponents of these theories, such as Alfred Mitchell-Innes, sometimes emphasize that money and credit/debt are the same thing, seen from different points of view. Proponents assert that the essential nature of money is credit (debt), at least in eras where money is not backed by a commodity such as gold. Two common strands of thought within these theories are the idea that money originated as a unit of account for debt, and the position that money creation involves the simultaneous creation of debt. Some proponents of credit theories of money argue that money is best understood as debt even in systems often understood as using commodity money. Others hold that money equates to credit only in a system based on fiat money, where they argue that all forms of money including cash can be considered as forms of credit money.

Stephen A. Zarlenga was a researcher and author in the field of monetary theory, trader in stock and financial markets, and advocate of monetary reform.

Functional finance is an economic theory proposed by Abba P. Lerner, based on effective demand principles and chartalism. It states that government should finance itself to meet explicit goals, such as taming the business cycle, achieving full employment, ensuring growth, and low inflation.

Inflationism is a heterodox economic, fiscal, or monetary policy, that predicts that a substantial level of inflation is harmless, desirable or even advantageous. Similarly, inflationist economists advocate for an inflationist policy.

Warren Mosler is an American economist, hedge fund manager, politician, and entrepreneur. He is a co-founder of the Center for Full Employment And Price Stability at University of Missouri-Kansas City. and the founder of Mosler Automotive. 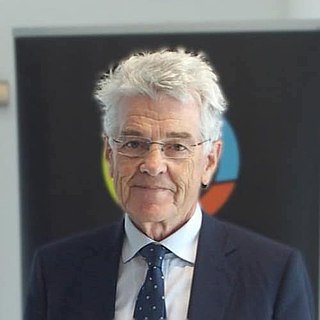 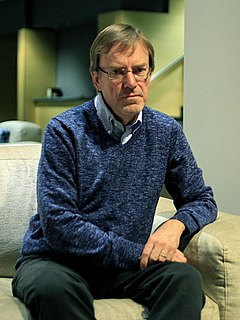 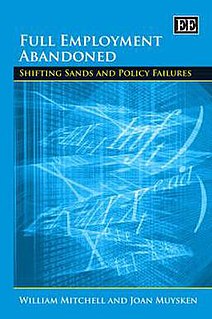 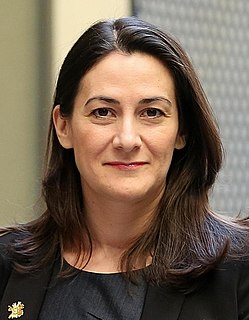 Pavlina R. Tcherneva is an American economist, of Bulgarian descent, working as associate professor and director of the economics program at Bard College. She is also a research associate at the Levy Economics Institute and expert at the Institute for New Economic Thinking.

The National Emergency Employment Defense Act, aka the NEED Act, is a monetary reform proposal submitted by Congressman Dennis Kucinich in 2011, in the United States. The bill has failed to gain any co-supporters and was not introduced to the floor of the house.