A supply shock is an event that suddenly increases or decreases the supply of a commodity or service, or of commodities and services in general. This sudden change affects the equilibrium price of the good or service or the economy's general price level.

In the short run, an economy-wide negative supply shock will shift the aggregate supply curve leftward, decreasing the output and increasing the price level. [1] For example, the imposition of an embargo on trade in oil would cause an adverse supply shock, since oil is a key factor of production for a wide variety of goods. A supply shock can cause stagflation due to a combination of rising prices and falling output.

The diagram to the right demonstrates a negative supply shock; The initial position is at point A, producing output quantity Y1 at price level P1. When there is a supply shock, this has an adverse effect on aggregate supply: the supply curve shifts left (from AS1 to AS2), while the demand curve stays in the same position. The intersection of the supply and demand curves has now moved and the equilibrium is now point B; quantity has been reduced to Y2, while the price level has been increased to P2.

The Phillips curve is a single-equation economic model, named after William Phillips, describing an inverse relationship between rates of unemployment and corresponding rates of rises in wages that result within an economy. Stated simply, decreased unemployment, in an economy will correlate with higher rates of wage rises. Phillips did not himself state there was any relationship between employment and inflation; this notion was a trivial deduction from his statistical findings. Paul Samuelson and Robert Solow made the connection explicit and subsequently Milton Friedman and Edmund Phelps put the theoretical structure in place. In so doing, Friedman was to successfully predict the imminent collapse of Phillips' a-theoretic correlation. 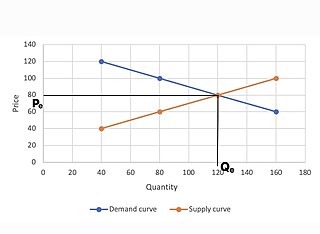 In economics, a demand curve is a graph depicting the relationship between the price of a certain commodity and the quantity of that commodity that is demanded at that price. Demand curves may be used to model the price-quantity relationship for an individual consumer, or more commonly for all consumers in a particular market.

In economics, a shock is an unexpected or unpredictable event that affects an economy, either positively or negatively. Technically, it is an unpredictable change in exogenous factors — that is, factors unexplained by an economic model — which may influence endogenous economic variables. 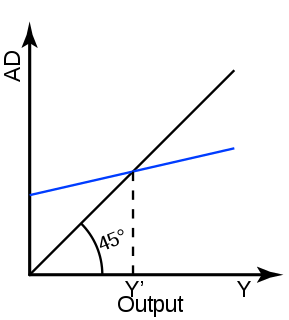 In economics, a demand shock is a sudden event that increases or decreases demand for goods or services temporarily.