Another example involves spillovers from credit markets to the goods market. If there is credit rationing, some individuals are constrained in the amount of funds they can borrow to finance goods purchases (including consumer durables and houses), so their effective demand for goods, as a function of this constraint, is less than their notional demand for goods (the amount they would buy if they could borrow all they want to).

Classical economist David Ricardo embraced Say's Law, suggesting, in Keynes's formulation, that "supply creates its own demand". According to Say's Law, for every excess supply (glut) of goods in one market, there is a corresponding excess demand (shortage) in another. This theory suggests that a general glut can never be accompanied by inadequate demand for products on a macroeconomic level. [4] In challenge of Say's Law, Thomas Malthus, Jean Charles Leonard de Sismondi and other 19th century economists argued that "effective demand" is the foundation of a stable economy. [5] Responding to the Great Depression of the 20th century, in the 1930s Michał Kalecki and John Maynard Keynes concurred with the latter theory, suggesting that "demand creates its own supply" and developing a comprehensive theory of effective demand.

According to Keynesian economics, weak demand results in unplanned accumulation of inventories, leading to diminished production and income, and increased unemployment. This triggers a multiplier effect which draws the economy toward underemployment equilibrium. By the same token, strong demand results in unplanned reduction of inventories, which tends to increase production, employment, and incomes. If entrepreneurs consider such trends sustainable, investments typically increase, thereby improving potential levels of production.

In the 1960s, Robert Clower and Axel Leijonhufvud did further work on effective demand, and in the 1970s Robert Barro and Herschel Grossman published a well-known model of spillover effects upon effective demand. [3]

In classical economics, Say's law, or the law of markets, is the claim that the production of a product creates demand for another product by providing something of value which can be exchanged for that other product. So, production is the source of demand. In his principal work, A Treatise on Political Economy, Jean-Baptiste Say wrote: "A product is no sooner created, than it, from that instant, affords a market for other products to the full extent of its own value." And also, "As each of us can only purchase the productions of others with his own productions – as the value we can buy is equal to the value we can produce, the more men can produce, the more they will purchase."

In economics, overproduction, oversupply, excess of supply or glut refers to excess of supply over demand of products being offered to the market. This leads to lower prices and/or unsold goods along with the possibility of unemployment. 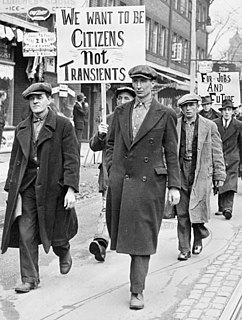 In macroeconomics, a general glut is an excess of supply in relation to demand, specifically, when there is more production in all fields of production in comparison with what resources are available to consume (purchase) said production. This exhibits itself in a general recession or depression, with high and persistent underutilization of resources, notably unemployment and idle factories. The Great Depression is often cited as an archetypal example of a general glut.