The microfoundations project originated in the post-Second World War neoclassical synthesis where it is generally believed that neoclassical microeconomics fused with Keynesian macroeconomics. [5] The ‘neoclassical microeconomics’ in mention is the Marshallian partial-equilibrium approach, which emerged from the Walrasian general equilibrium theory. [5] However, the Walrasian general equilibrium theory presents another trend to the synthesis as it attempts to theorise the economy as a whole and is viewed as an alternative to macroeconomics. This approach is considered to be the trigger for exploring microfoundations, [1] however, the notion of a gap in the “micro-macro” link has been and continues to be explored in various theories and models.

One particularly influential endorsement of the study of microfoundations was Robert Lucas, Jr.'s critique of traditional macroeconometric forecasting models. After the apparent shift of the Phillips curve relationship during the 1970s, Lucas argued that the correlations between aggregate variables observed in macroeconomic data would tend to change whenever macroeconomic policy changed. This implied that microfounded models are more appropriate for predicting the effect of policy changes, using the assumption that changes of macroeconomic policy do not alter the microeconomics of the macroeconomy. [8]

It is suggested that modern mainstream economics is based entirely on DSGE models. [10] [5] Therefore, the importance of microfoundations lies in its synonymous relationship with DSGE. [11]

1.    Microfoundations provides a modelling structure where data may not be very informative.

2.    Microfoundations avoids the Lucas Critique as it is able to relate the reduced-form parameters to deeper structural parameters.

3.    Microfoundations provides a basis for estimating the optimality and desirability of policy.

While these points summarise the desire to adopt DSGE models - or microfoundations - there are limitations to the model with scholars stating that their forecast performance can be poor in terms of their ability to forecast individual variables. [5] Therefore, there is continuous debate on the microfoundations project and its efficacy with an overall lack of consensus.

Specialization in the management and organizational sciences has led to a divide between “macro” and “micro” areas. [13] Research in macro management mainly focuses on the organizational or firm level, while research in micro areas mainly examines individual and group levels within organizations. [14] For example, macro research domains typically include strategic management and organization theory, whereas micro includes areas such as organizational behaviour and human resource management. [14] Most early macroeconomic models, including early Keynesian models, were based on hypotheses about relationships between aggregate quantities, such as aggregate production, employment, consumption, and investment. Critics and proponents of these models disagreed as to whether these aggregate relationships were consistent with the principles of microeconomics. [15] There, bridging these two domains continues to be a topic of debate for organizational, management and strategy scholars. [16] As a result, microfoundations has become a topic of greater interest to researchers as it explores how micro and macro areas connect.

There are two main assumptions that the microfoundations project rests upon:

However, in addition to these assumptions, various scholars have indicated that microfoundations is understood to be "an application of underlying standpoint, methodological individualism," [5] a concept which also has ambiguity in its meaning. Nevertheless, microfoundations research only means that individual behaviour must be shown to be consistent with macro entities. While there may be various outlooks on the topic, the general consensus implies that to bridge macro and micro theories and models, microfoundations should be adopted.

Some, such as Alan Kirman [20] and S. Abu Turab Rizvi, [21] argue on the basis of the Sonnenschein–Mantel–Debreu theorem that the microfoundations project has failed.

Economics is "the social science that studies the production, distribution, and consumption of goods and services."

Economists use the term representative agent to refer to the typical decision-maker of a certain type.

Economics education or economic education is a field within economics that focuses on two main themes: 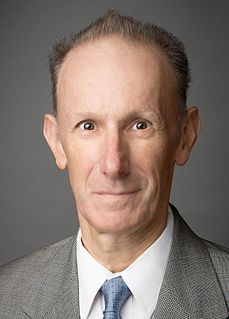 Julio Jacobo Rotemberg was an Argentine/American economist at Harvard Business School. He was known for his collaboration with Michael Woodford on the first New Keynesian DSGE model, especially on monopolistic competition. He was also known for an alternative model of sticky prices.

The new neoclassical synthesis (NNS), which is now generally referred to as New Keynesian economics, and occasionally as the New Consensus, is the fusion of the major, modern macroeconomic schools of thought - new classical macroeconomics/real business cycle theory and early New Keynesian economics - into a consensus view on the best way to explain short-run fluctuations in the economy. This new synthesis is analogous to the neoclassical synthesis that combined neoclassical economics with Keynesian macroeconomics. The new synthesis provides the theoretical foundation for much of contemporary mainstream macroeconomics. It is an important part of the theoretical foundation for the work done by the Federal Reserve and many other central banks.

Nicolai J. Foss is a Danish organizational theorist, and entrepreneurship and strategy scholar. He is currently a professor at the Copenhagen Business School where he has spent most of his career. Foss' main contribution to organization theory is through the micro-foundational perspective in organization theory and management - examining how individual behaviors aggregate to affect the behavior of larger groups and organizations.

In economic theory and econometrics, the term heterogeneity refers to differences across the units being studied. For example, a macroeconomic model in which consumers are assumed to differ from one another is said to have heterogeneous agents.