One simple version of adaptive expectations is stated in the following equation, where

is the next year's rate of inflation that is currently expected;

is this year's rate of inflation that was expected last year; and

is this year's actual rate of inflation:

The above term is the partial adjustment error term, this term allows for variances that occur between actual values and expected values. The importance of considering the error prevents over and under expecting values of in the above example inflation rates. The adjustment means that the expectation can tend toward the direction of the future expected value that would be closer to the actual value, this allows a prediction to be made and consideration to be added or removed so as to be accurate of the future expectation. This consideration or error term is what allows the predicted value to be adaptable, thus creating an equation that is adaptive of the expectation being inferred.

The theory of adaptive expectations can be applied to all previous periods so that current inflationary expectations equal:

years in the past. The adding of a time series portion to the expectation equations accounts for multiple previous years and their respective rates in forecasting like the above example of the future inflation rate. Thus, current expected inflation reflects a weighted average of all past inflation rates, where the weights get smaller and smaller as we move further in to the past. The initial previous year has the highest weighting and the subsequent years take lesser weighting the further back the equation accounts for.

The first use adaptive expectations hypothesis was to describe agent behavior in The Purchasing Power of Money by Irving Fisher (1911), then later used to describe models such as hyperinflation by Philip Cagan (1956). [2] Adaptive expectations were instrumental in the consumption function (1957) and Phillips curve outlined by Milton Friedman. Friedman suggests that workers form adaptive expectations of the inflation rate, the government can easily surprise them through unexpected monetary policy changes. As agents are trapped by the money illusion, they are unable to correctly perceive price and wage dynamics, so based on Friedman's theory, unemployment can always be reduced through monetary expansions. If the government chooses to fix a low unemployment rate the result is an increasing level of inflation for an extended period of time. However, in this framework, it is clear why and how adaptive expectations are problematic. Agents are arbitrarily supposed to ignore sources of information which, otherwise, would affect their expectations. For example, government announcements are such sources. Agents are expected to modify their expectations and break with the former trends when changes in economic policy necessitate it. This is the reason why the theory of adaptive expectations is often regarded as a deviation from the rational tradition of economics. [3] 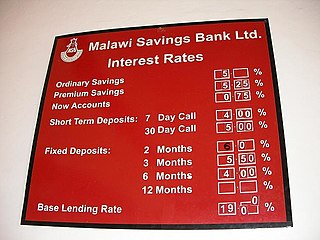 Interest, in finance and economics, is payment from a borrower or deposit-taking financial institution to a lender or depositor of an amount above repayment of the principal sum, at a particular rate. It is distinct from a fee which the borrower may pay the lender or some third party. It is also distinct from dividend which is paid by a company to its shareholders (owners) from its profit or reserve, but not at a particular rate decided beforehand, rather on a pro rata basis as a share in the reward gained by risk taking entrepreneurs when the revenue earned exceeds the total costs.

In finance, arbitrage pricing theory (APT) is a general theory of asset pricing that holds that the expected return of a financial asset can be modeled as a linear function of various factors or theoretical market indices, where sensitivity to changes in each factor is represented by a factor-specific beta coefficient. The model-derived rate of return will then be used to price the asset correctly—the asset price should equal the expected end of period price discounted at the rate implied by the model. If the price diverges, arbitrage should bring it back into line. The theory was proposed by the economist Stephen Ross in 1976. The linear factor model structure of the APT is used as the basis for many of the commercial risk systems employed by asset managers.

The ΛCDM or Lambda-CDM model is a parameterization of the Big Bang cosmological model in which the universe contains three major components: first, a cosmological constant denoted by Lambda associated with dark energy; second, the postulated cold dark matter ; and third, ordinary matter. It is frequently referred to as the standard model of Big Bang cosmology because it is the simplest model that provides a reasonably good account of the following properties of the cosmos:

In economics, money illusion, or price illusion, is the name for the human cognitive bias to think of money in nominal, rather than real, terms. In other words, the face value of money is mistaken for its purchasing power at a previous point in time. Viewing purchasing power as measured by the nominal value is false, as modern fiat currencies have no intrinsic value and their real value depends purely on the price level. The term was coined by Irving Fisher in Stabilizing the Dollar. It was popularized by John Maynard Keynes in the early twentieth century, and Irving Fisher wrote an important book on the subject, The Money Illusion, in 1928.

Temporal difference (TD) learning refers to a class of model-free reinforcement learning methods which learn by bootstrapping from the current estimate of the value function. These methods sample from the environment, like Monte Carlo methods, and perform updates based on current estimates, like dynamic programming methods.

The cobweb model or cobweb theory is an economic model that explains why prices might be subject to periodic fluctuations in certain types of markets. It describes cyclical supply and demand in a market where the amount produced must be chosen before prices are observed. Producers' expectations about prices are assumed to be based on observations of previous prices. Nicholas Kaldor analyzed the model in 1934, coining the term "cobweb theorem", citing previous analyses in German by Henry Schultz and Umberto Ricci.

The policy-ineffectiveness proposition (PIP) is a new classical theory proposed in 1975 by Thomas J. Sargent and Neil Wallace based upon the theory of rational expectations, which posits that monetary policy cannot systematically manage the levels of output and employment in the economy.

The Lucas islands model is an economic model of the link between money supply and price and output changes in a simplified economy using rational expectations. It delivered a new classical explanation of the Phillips curve relationship between unemployment and inflation. The model was formulated by Robert Lucas, Jr. in a series of papers in the 1970s.

In probability theory and statistics, Campbell's theorem or the Campbell–Hardy theorem is either a particular equation or set of results relating to the expectation of a function summed over a point process to an integral involving the mean measure of the point process, which allows for the calculation of expected value and variance of the random sum. One version of the theorem, also known as Campbell's formula, entails an integral equation for the aforementioned sum over a general point process, and not necessarily a Poisson point process. There also exist equations involving moment measures and factorial moment measures that are considered versions of Campbell's formula. All these results are employed in probability and statistics with a particular importance in the theory of point processes and queueing theory as well as the related fields stochastic geometry, continuum percolation theory, and spatial statistics.

The Taylor contract or staggered contract was first formulated by John B. Taylor in his two articles, in 1979 "Staggered wage setting in a macro model'. and in 1980 "Aggregate Dynamics and Staggered Contracts". In its simplest form, one can think of two equal sized unions who set wages in an industry. Each period, one of the unions sets the nominal wage for two periods. This means that in any one period, only one of the unions can reset its wage and react to events that have just happened. When the union sets its wage, it sets it for a known and fixed period of time. Whilst it will know what is happening in the first period when it sets the new wage, it will have to form expectations about the factors in the second period that determine the optimal wage to set. Although the model was first used to model wage setting, in new Keynesian models that followed it was also used to model price-setting by firms.