Last updated January 08, 2020
a currency that can be spent in a particular geographical locality at participating organisations.

The Wörgl experiment illustrates some of the common characteristics and major benefits of local currencies. [7]

1. Local currencies with negative interest rate or demurrage tend to circulate much more rapidly than national currencies. The same amount of currency in circulation is employed more times and results in far greater overall economic activity. It produces greater benefit per unit. The higher velocity of money is a result of the negative interest rate which encourages people to spend the money more quickly.

2. Local currencies enable the community to more fully use its existing productive resources, especially unemployed labor, which has a catalytic effect on the rest of the local economy. They are based on the premise that the community is not fully using its productive capacities, because of a lack of local purchasing power. The alternative currency is used to increase demand, resulting in a greater exploitation of productive resources. So long as the local economy is functioning at less than full capacity, the introduction of local currency need not be inflationary, even when it results in a significant increase in total money supply and total economic activity.

3. Since local currencies are only accepted within the community, their usage encourages the purchase of locally produced and locally-available goods and services. Thus, for any level of economic activity, more of the benefit accrues to the local community and less drains out to other parts of the country or the world. For instance, construction work undertaken with local currencies employs local labor and uses as far as possible local materials. The enhanced local effect becomes an incentive for the local population to accept and use the scrips.

4. Some forms of complementary currency can promote fuller use of resources over a much wider geographic area and help bridge the barriers imposed by distance. The Fureai kippu system in Japan issues credits in exchange for assistance to senior citizens. Family members living far from their parents can earn credits by offering assistance to the elderly in their local community. The credits can then be transferred to their parents and redeemed by them for local assistance. Airline frequent flyer miles are a form of complementary currency that promotes customer-loyalty in exchange for free travel. The airlines offer most of the coupons for seats on less heavily sold flights where some seats normally go empty, thus providing a benefit to customers at relatively low cost to the airline.

5. While most of these currencies are restricted to a small geographic area or a country, through the Internet electronic forms of complementary currency can be used to stimulate transactions on a global basis. In China, Tencent's QQ coins are a virtual form of currency that has gained wide circulation. QQ coins can be bought for Renminbi and used to buy virtual products and services such as ringtones and on-line video game time. They can also be obtained through on-line exchange for goods and services at about twice the Renminbi price, by which additional 'money' is being directly created. Though virtual currencies are not 'local' in the tradition sense, they do cater to the specific needs of a particular community, a virtual community. Once in circulation, they add to the total effective purchasing power of the on-line population as in the case of local currencies. The Chinese government has begun to tax the coins as they are exchanged from virtual currency to actual hard currency. [8]

Local currencies and the Transition Towns movement in the UK have been criticized for failing to address the needs of the wider population, especially lower socio-economic groups. [9] Such local currency initiatives have been more widely criticized as having limited success in stimulating spending in local economies, and as an unrealistic strategy to reduce carbon emissions. [10]

Modern local currencies can be classified into the following distinct types:

1. Transition currency based on the local currencies used by the Transition Towns movement in the UK. They include Brixton Pound and Bristol Pound in the UK, BerkShares in the USA, and Salt Spring Dollars in Canada.

Transition currencies are payment voucher-based systems that are exchangeable with the national currency. Between 2002-2014 many experiments in local currency took this form. Such currencies aim to raise the resilience of local economies by encouraging re-localisation of buying and food production. The drive for this change has arisen from a range of community-based initiatives and social movements. The Transition Towns movement originating in the UK has used local currencies for re-localisation in the face of energy descent from peak oil and climate change. Other drives include movements against Clone town [12] [13] and Big-box trends.

2. Rewards currency based on the frequent flyer model. Consumer spends cash with participating businesses who issue rewards points in a local currency. These rewards points can be used to offset cash prices in future purchases. An example is Oakland Grown in Oakland, CA. [14]

3. Mutual Credit currency based on the mutual credit system. This can be further sub-divided into two:

a. Time-based currency also known as Time Banks that use time as a measure of value. An example is Dane County Time Bank.

b. Trade exchanges and LETS (local exchange trading system) that use price as a measure of value. An example of local currency implemented as a trade exchange is Bay Bucks in the Bay Area of California, USA. [15] LETS were originally started in Vancouver, Canada, there are presently more than 30 LETS systems operating in Canada and over 400 in the United Kingdom. Australia, France, New Zealand, and Switzerland have similar systems. 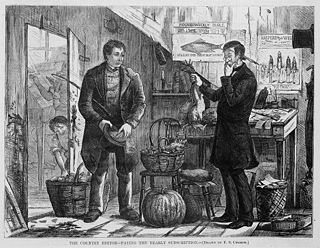 In trade, barter is a system of exchange where participants in a transaction directly exchange goods or services for other goods or services without using a medium of exchange, such as money. Economists distinguish barter from gift economies in many ways; barter, for example, features immediate reciprocal exchange, not delayed in time. Barter usually takes place on a bilateral basis, but may be multilateral. In most developed countries, barter usually only exists parallel to monetary systems to a very limited extent. Market actors use barter as a replacement for money as the method of exchange in times of monetary crisis, such as when currency becomes unstable or simply unavailable for conducting commerce.

A local exchange trading system is a locally initiated, democratically organised, not-for-profit community enterprise that provides a community information service and records transactions of members exchanging goods and services by using locally created currency. LETS allow people to negotiate the value of their own hours or services, and to keep wealth in the locality where it is created.

The peso is the currency of Argentina, identified by the symbol $ preceding the amount in the same way as many countries using dollar currencies. It is subdivided into 100 centavos. Its ISO 4217 code is ARS.

Economic secession has been variously defined by sources. In its narrowest sense, it is abstention from the state’s economic system – for instance by replacing the use of government money with barter, Local Exchange Trading Systems, or commodity money. Wendell Berry may have coined the term "economic secession." He promoted his own version in his 1991 essay Conservation and Local Economy. John T. Kennedy used the term to refer to all human action that is forbidden by the State; he explains economic secession as tax avoidance or refusal to follow regulations as a method to reduce government control.

Demurrage is the cost associated with owning or holding currency over a given period. It is sometimes referred to as a carrying cost of money. For commodity money such as gold, demurrage is the cost of storing and securing the gold. For paper currency, it can take the form of a periodic tax, such as a stamp tax, on currency holdings. Demurrage is sometimes cited as economically advantageous, usually in the context of complementary currency systems.

The WIR Bank, formerly the Swiss Economic Circle, or WIR, is an independent complementary currency system in Switzerland that serves businesses in hospitality, construction, manufacturing, retail and professional services. WIR issues and manages a private currency, called the WIR Franc, which is used in combination with the Swiss Franc to generate dual-currency transactions.

Labour vouchers are a device proposed to govern demand for goods in some models of socialism and to replace some of the tasks performed by currency under capitalism.

Thomas Henry Greco Jr. is a community economist, who blogs, writes, and speaks on the subject of free market alternative currency and monetary systems.

The Totnes pound (t£) (was a complementary local currency, intended to support the local economy of Totnes, a town in Devon, England. It was in circulation from March 2007 to June 2019, when it was discontinued due partly to an increasingly cashless economy.

The Community Exchange System (CES) is an internet-based global trading network which allows participants to buy and sell goods and services without using a national currency. It may be described as a type of local exchange trading system (LETS) network based on free software. While it can be used as an alternative to traditional currencies such as the Australian dollar or Euro or South African rand, the Community Exchange System is a complementary currency in the sense that it functions alongside established currencies.

A cryptocurrency is a digital asset designed to work as a medium of exchange that uses strong cryptography to secure financial transactions, control the creation of additional units, and verify the transfer of assets. Cryptocurrencies use decentralized control as opposed to centralized digital currency and central banking systems. 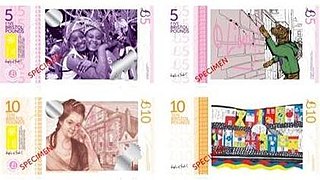 The Bristol Pound (£B) is a form of local, complementary, and/or community currency launched in Bristol, UK on 19 September 2012. Its objective is to encourage people to spend their money with local, independent businesses in Bristol and the former County of Avon. As of September 2012, it is the largest alternative in the UK to official sterling currency, though it is backed by Sterling.

Túmin is an alternative currency used in the municipality of Espinal, Veracruz, Mexico. Its name means "money" in the Totonac language.. Espinal is a municipality of some 2600 inhabitants, 19% of whom are indigenous Totonac people. Used as a complementary currency, the Tumin was first put in circulation in 2010 as a student project at the Intercultural University of Veracruz, where students were trying to find ways of strengthening the local economy. In Espinal the access to cash is scarce as most people work for the minimum wage. The project creators analyzed the economy of the area and concluded that there were sufficient goods and demand, but that a medium of exchange was lacking. The creators designed bills and started promoting its use as a kind of exchange coupon among locals in Espinal, in order to support a barter economy. The bills are decorated with the likenesses of Emiliano Zapata and paintings by Diego Rivera, and they describe the value of the bill in Spanish and Totonac. The Tumin is accepted in Espinal in the purchase of services from health care to tacos and internet cafe visits.

Sarafu-Credit is a community currency system operated in Kenya. It is used by five different communities, all located in informal settlements or slum areas, including small businesses and schools.