Commemorative coins are coins issued to commemorate some particular event or issue with a distinct design with reference to the occasion on which they were issued. Many coins of this category serve as collectors items only, although some countries also issue commemorative coins for regular circulation.

Commemorative coins can be seen as being of one of three types:

Historically, the coins issued by any state have always reflected the current political or economic situation. Many ancient and pre-modern coins certainly commemorate events in contemporary times. For instance, Roman coins often have references to military campaigns and the defeat of foreign powers. These reverse types often symbolically represent the subordination of recently conquered territories to Roman authority. Such coins are examples of ancient political propaganda. The Roman Empire may be represented by a proud warrior 'raising' an undersized figure, representing the defeated enemy.

Throughout history, coins have commonly been issued on special occasions, without necessarily citing that occasion explicitly. In some cases, emergency money have been issued under unfavourable conditions, such as a city under siege. Such emergency coins were issued in Vienna in 1529, while the city was besieged by the troops of the Ottoman Empire. Due to the conditions at the time, such coins are frequently minted on square flans, rather than round ones (it was easier and quicker to produce a square flan than a round one). European square coins of this era are known by their German name 'klippe'. Coins might also be issued with the specific purpose of financing a military campaign, or for the payment of tribute or war indemnity by a feudal lord to his sovereign.

During recent centuries, specially prepared coins have been issued to proclaim the coronation of a new monarch. Such coins are known as 'largesse' coins. This type of coins were issued in India during the Mughal era (the 'nisar' coinage), and in Europe in the age of absolutism. In Europe, such coins were scattered from the royal chariot, to achieve attention and applause from the public. In Sweden, coins of this type were issued as late as 1873 (known as 'kastpenning').

During the era of the formation of the European nation states, the issuance of special coins explicitly commemorating various events became increasingly common. These coins were frequently devised to establish a public notion of nationhood, and also to honor the ruling monarch and his dynasty. During the economically exhaustive Napoleonic wars, a one sixth rigsdaler was issued in Denmark from voluntary contributions from the public, intended to finance the creation of a new fleet. Another notable coin is the Prussian thaler of 1871, commemorating the victory of the Franco-Prussian war, opening the gates for the Prussian king to be crowned as Emperor of the unified German nation. After the (political and monetary) unification of Germany, some German states continued issuing separate coins on special occasions, such as the jubilee of a ruling monarch. The issuance of these royal jubilee coins became common throughout Europe in the late 19th and early 20th century. In some cases, these became collector items already at the time of their minting.

Before World War II, commemorative coins were always made of precious metals. The base metal coins were probably not considered appropriate for, or worthy of, honoring the nation or the ruling dynasty. However, during the 20th century, the use of precious metals for circulating currency became increasingly scarce. World War I and the world economic crisis of the 1930s brought about temporary or permanent abolition of the convertibility of bank notes to silver and gold coins. Gradually, the issuance of precious metal coins became increasingly restricted, and definitively abandoned about 1970. While the commemoratives of these decades continued to be issued predominantly in precious metals, their use as circulating currency became scarce or ceased entirely. Thus, the commemoratives developed into a separate class of coins with no immediately recognisable link to the coins and notes used in everyday transactions. This class of coins were collectors items, or in some cases objects for economic investment.

In the United Kingdom, before decimalisation of the money system in 1971, the usual commemorative coin was a crown, or five shilling piece. These were issued to mark coronations of monarchs; one was also issued on the occasion of the death of Winston Churchill. Some decimal crowns (worth 25 pence) were issued, but since 1990 the £5 has been the usual non circulating commemorative coin. Other denominations such as the 50 pence and £2 are issued as circulating commemoratives.

Many countries issue large quantities of non-circulating legal tender purely for seigniorage as a profit making exercise. The events that these coins commemorate are often chosen based on a perceived market, rather than events of significance to the country. Technology developed for non circulating coins has moved to circulation issues - coloured coins were first issued as non circulating legal tender, but Canada and Australia have issued coloured commemorative coins into circulation. 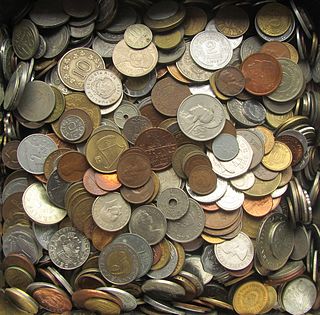 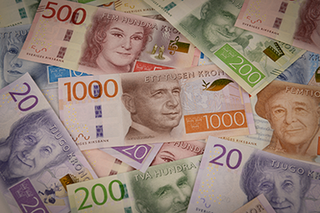 The krona is the official currency of Sweden. Both the ISO code "SEK" and currency sign "kr" are in common use; the former precedes or follows the value, the latter usually follows it but, especially in the past, it sometimes preceded the value. In English, the currency is sometimes referred to as the Swedish crown, as krona means "crown" in Swedish. The Swedish krona was the ninth-most traded currency in the world by value in April 2016.

In economics, Gresham's law is a monetary principle stating that "bad money drives out good". For example, if there are two forms of commodity money in circulation, which are accepted by law as having similar face value, the more valuable commodity will gradually disappear from circulation.

There are eight euro coin denominations, ranging from one cent to two euros. The coins first came into use in 2002. They have a common reverse, portraying a map of Europe, but each country in the eurozone has its own design on the obverse, which means that each coin has a variety of different designs in circulation at once. Four European microstates that are not members of the European Union use the euro as their currency and also have the right to mint coins with their own designs on the obverse side.

The złoty is the official currency and legal tender of Poland. It is subdivided into 100 grosz (gr). The widely recognised English form of the currency name is the Polish zloty. It is the most traded currency in Central and Eastern Europe and ranks 22nd most-traded in the foreign exchange market.

The kroon was the official currency of Estonia for two periods in history: 1928–1940 and 1992–2011. Between 1 January and 14 January 2011, the kroon circulated together with the euro, after which the euro became the sole legal tender in Estonia. The kroon was subdivided into 100 cents.

The British crown was a denomination of sterling coinage worth 1/4 of one pound, or 5 shillings, or 60 (old) pence. The crown was first issued during the reign of Edward VI, as part of the coinage of the Kingdom of England.

The tenge is the currency of Kazakhstan. It is divided into 100 tiyn.

The Sri Lankan Rupee is the currency of Sri Lanka. It is subdivided into 100 cents, but cents are rarely seen in circulation due to its low value. It is issued by the Central Bank of Sri Lanka. The abbreviation Re (singular) and Rs (plural) is generally used, the World Bank suggests SL Rs as a fully disambiguating abbreviation for distinction from other currencies named "rupee".

The Freedom Tower Silver Dollar is a "one dollar" coin minted under license of the Commonwealth of the Northern Mariana Islands (CNMI) in 2004, although the CNMI does not have legal authority to issue or authorize currency. Despite vague statements in advertisements, it is not issued by the United States Mint and is not considered legal tender, nor is it considered non-circulating legal tender. The CNMI receives royalty fees from proceeds of the sale of the coin. The coin is actually minted by SoftSky, a Wyoming commemorative coin maker. 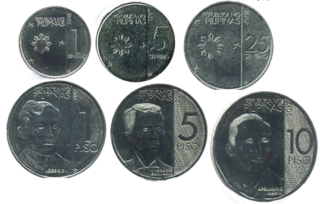 This article covers the gold and silver issues of the euro commemorative coins. It also includes some rare cases of bimetal collector coins.