Shadden served in the U.S. Army during World War II.

Cumberland County is a county located in the U.S. state of Tennessee. As of the 2010 census, the population was 56,053. Its county seat is Crossville.

Crossville is a town in DeKalb County, Alabama, United States. At the 2010 census the population was 1,862, up from 1,431 in 2000. Crossville is located atop Sand Mountain, a southern extension of the Cumberland Plateau.

Crossville is a city in and the county seat of Cumberland County, Tennessee, United States. It is part of the Crossville, TN Micropolitan Statistical Area. The population was 10,795 at the 2010 census. 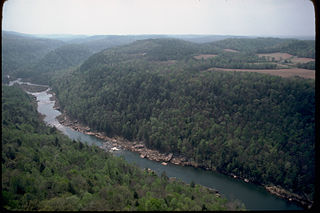 Obed River is a stream draining a part of the Cumberland Plateau in Tennessee. It, and particularly its tributaries, are important streams for whitewater enthusiasts.

The Miss Tennessee Teen USA competition is the pageant that selects the representative for the state Tennessee in the Miss Teen USA pageant. The pageant is directed by Greenwood Productions under the ownership of Miss Tennessee USA 1989, Kimberly Payne Greenwood, since 1992.

The Tennessee Central Railway was founded in 1884 as the Nashville and Knoxville Railroad by Alexander S. Crawford. It was an attempt to open up a rail route from the coal and minerals of East Tennessee to the markets of the midstate, a service which many businessmen felt was not being adequately provided by the existing railroad companies. They also wanted to ship coal and iron ore to the Northeastern US over the Cincinnati Southern Railway, which was leased to the Southern and operated as the Cincinnati, New Orleans and Texas Pacific Railway (CNOTP), through their Cincinnati gateway. The N&K was only completed between Lebanon, where it connected to a Nashville, Chattanooga and St. Louis Railway branch from Nashville, and Standing Stone.

Cumberland Mountain State Park is a state park in Cumberland County, Tennessee, in the southeastern United States. The park consists of 1,720 acres (7.0 km2) situated around Byrd Lake, a man-made lake created by the impoundment of Byrd Creek in the 1930s. The park is set amidst an environmental microcosm of the Cumberland Plateau and provides numerous recreational activities, including an 18-hole Bear Trace golf course.

U.S. Route 127 (US 127) is a 758-mile-long (1,220 km) north–south U.S. Highway in the eastern half of the United States. The southern terminus of the route is at US 27 in Chattanooga, Tennessee. The northern terminus is at Interstate 75 (I-75) near Grayling, Michigan. Since 1987, it has been the core of the annual World's Longest Yard Sale, also known as the Highway 127 Corridor Sale, which now stretches 690 miles (1,110 km) from Addison, Michigan, to Gadsden, Alabama. The sale, held every August, was started to demonstrate that the older U.S. Highway System has something to offer that the Interstate Highway System does not. In Michigan, US 127 tripled in length in 2002, taking mileage from its parent, US 27. 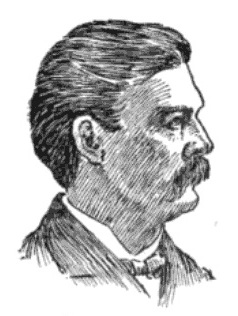 Charles Edward Snodgrass was an American politician and a member of the United States House of Representatives for the 4th congressional district of Tennessee. 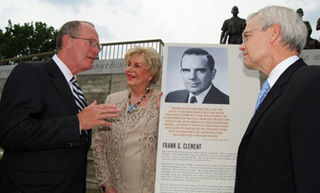 Anna Belle Clement O'Brien was a Tennessee politician, nicknamed "the first lady of Tennessee politics." She served as the governor's chief of staff from 1963 to 1967, was a member of the Tennessee House of Representatives in the 89th General Assembly, from 1975 to 1977, and a Tennessee State Senator in the 90th to 96th General Assemblies, from 1977 to 1991. While she was not the first woman ever to be in the Tennessee Senate, she was the first woman ever to be a chairman of a committee. Senator Mildred Jolly Lashlee was Chair of the Public Utilities Committee 1945-1947 which was absorbed into Energy & Natural Resources Committee during Senator O'Brien's tenure. During her 22 years in the General Assembly, she was the chairperson for three committees: Education, Transportation, and the Democratic Caucus.

Charles Herbert O'Brien, was a Tennessee State Senator in the 83rd and 84th Tennessee General Assemblies, a justice of the Tennessee Court of Criminal Appeals and Tennessee Supreme Court (1987–1994), and the husband of well-known Tennessee Democratic politician Anna Belle Clement O'Brien, who was the sister of the Tennessee Governor Frank G. Clement and served as her brother's chief of staff and as a state senator.

John Ridley Mitchell was an American politician and a U.S. Representative from Tennessee. 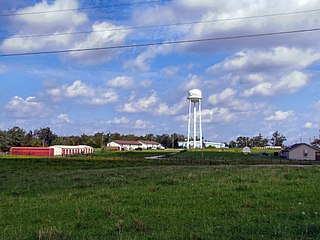 Clarkrange is an unincorporated community and census-designated place (CDP) in Fentress County, Tennessee, United States. It is concentrated around the intersection of U.S. Route 127 and Tennessee State Route 62, in Tennessee's western Cumberland Plateau region. The 2010 census reported the population of Clarkrange as 575.

The government of Tennessee is organized under the provisions of the 1870 Constitution of Tennessee, first adopted in 1796. As set forth by the state constitution, Tennessee's government is divided into three branches: executive, judicial, and legislative branches. 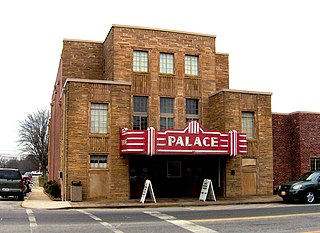 The Palace Theater at 210 N. Main St. in Crossville, Tennessee is a historic movie theater built in the 1930s.

Horace Burgess's Treehouse was a treehouse and church in Crossville, Tennessee. Construction began in 1993, mostly by Burgess who says that, in a vision, God commanded him to build a treehouse. It became a popular local attraction and was unofficially called the largest tree house in the world. It was closed by the state on August 30, 2012 for fire code violations. On October 22, 2019 the tree house completely burned to the ground under unknown circumstances.

The Northwest Connector or State Route 462 is a state highway in Cumberland County, Tennessee. When completed it will serve as a west and north bypass of Crossville. The route is currently under construction. One section will use two surface roads on the north side of Crossville.