Thomas Dolman Shorts was a Canadian sailor, and one of the early captains on the Okanagan Lake. Shorts started the lakeboat service on Okanagan Lake in the Penticton area. [1] 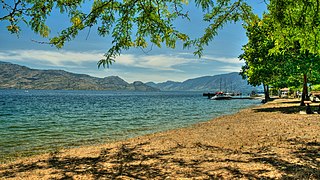 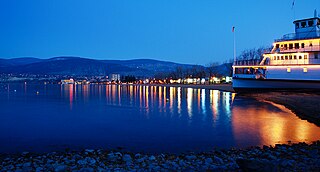 Penticton is a city in the Okanagan Valley of the Southern Interior of British Columbia, Canada, situated between Okanagan and Skaha lakes. In 2016, its population was 33,761, while its census agglomeration population was 43,432.

Ruth Shorts was Thomas Shorts's first boat. She was named for his mother. [2] Ruth Shorts was a 22-foot-long (6.7 m) rowboat that could make a roundtrip from Penticton to Okanagan Landing in nine days. [1] Ruth Shorts could carry 2.5 tons of cargo as well as a few passengers. Occasionally, the boat would sport a sail if the weather permitted it. Captain Shorts had no schedule; he left when he wanted or when there was enough people to make the trip worthwhile. Shorts would row during the day and when dusk fell he would row ashore and camp on land with his passengers for the night. Captain Shorts would row sixty-five miles per trip. [2]

Ruth Shorts was pioneer Captain Thomas Shorts' first boat on Okanagan Lake in British Columbia, Canada and starting with her, Shorts was the first boater on the lake, beginning a long history of ships and steam transportation that enabled the development of the Okanagan. In the early 1880s, Shorts thought of beginning a freight business on the lake and had Pringle and Hamill of Lansdowne build a rowboat with a capacity of 2.5 tons. The boat was 22 feet (6.7 m) long and had a small sail. Shorts named the boat Ruth Shorts after his mother and he began service in 1883. There was no set schedule, but the round trip generally took nine days and Shorts rowed in all weather for three years, averaging a passenger a month. He made about CAD$6000 rowing before venturing into steam with Mary Victoria Greenhow in 1886, only to lose his earnings.

Okanagan Landing was an unincorporated settlement and steamboat port at the north end of Okanagan Lake in the Southern Interior of British Columbia. Located southwest of the city of Vernon, it was the terminus station for the Shuswap and Okanagan Railway and served as the port and shipyard for steamboats operating to the south, as well as a transfer barge slip. 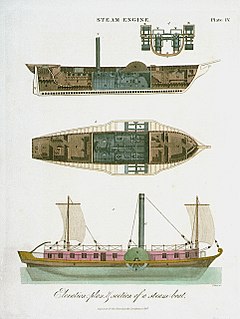 A steamship, often referred to as a steamer, is a type of steam-powered vessel, typically ocean-faring and seaworthy, that is propelled by one or more steam engines that typically move (turn) propellers or paddlewheels. The first steamships came into practical usage during the early 1800s; however, there were exceptions that came before. Steamships usually use the prefix designations of "PS" for paddle steamer or "SS" for screw steamer. As paddle steamers became less common, "SS" is assumed by many to stand for "steam ship". Ships powered by internal combustion engines use a prefix such as "MV" for motor vessel, so it is not correct to use "SS" for most modern vessels.

In 1887, Shorts salvaged the engine from the burned Mary Victoria Greenhow and modified it so that it was powered by burning wood, and he installed this engine in his new boat, the Jubilee. The Jubilee was thirty feet long and could tow a barge. In 1889, only two years after she began operation, she sank. [2]

In 1890, Shorts partnered with Thomas Ellis to improve the lake service in the Okanagan. Ellis could provide the funds that Shorts needed. [1] Together, they had a new boat ordered. Meanwhile, Shorts took the engine from the Jubilee and attached it to a scow and called his new creation the City of Vernon. He used the City of Vernon until the new boat was ready. [2] The new boat, named Penticton, was a 70-foot-long (21 m) twin screw steamer. After only two years of operation, Shorts and Ellis sold the Penticton to Leon Lequime of Kelowna for five thousand dollars. [1]

Thomas Ellis was the first European settler in the area known today as Penticton, British Columbia, Canada. He was the biggest cattle baron in the South Okanagan area.

A scow is a flat-bottomed type of sailboat. During the 19th and early 20th centuries, scows were used to carry cargo in coastal waters and inland waterways, having the advantage when navigating shallow water or serving small harbours. Scows were in common use in the American Great Lakes and other parts of the U.S., in southern England, and in New Zealand. In modern times their main purpose is for recreation and racing.

Kelowna is a city on Okanagan Lake in the Okanagan Valley in the southern interior of British Columbia, Canada. It serves as the head office of the Regional District of the Central Okanagan. The name Kelowna derives from an Okanagan language term for "grizzly bear".

Shorts had never been big on luxury, so when the Canadian Pacific Railway entered the lake service with the SS Aberdeen, Shorts could not, despite his many efforts, compete with them. Not long after the Aberdeen was launched Shorts left the lake service. He headed for the Klondike hoping to strike it rich. [2] 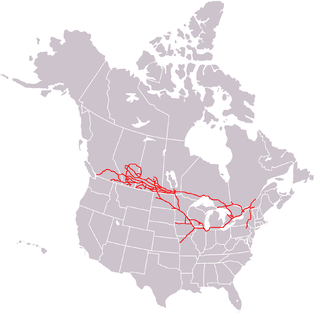 SS Aberdeen was a steamship commissioned by Canadian Pacific Railway company. It was the first CPR steamship on Okanagan Lake and carried passengers and cargo from Okanagan Landing to Penticton from 1893 to 1919. Aberdeen connected communities along Okanagan Lake for the first time, creating a new era in the Okanagan Valley and greatly aiding the economy and settlement of the interior of British Columbia.

The Klondike is a region of the Yukon territory in northwest Canada, east of the Alaskan border. It lies around the Klondike River, a small river that enters the Yukon River from the east at Dawson City.

The British Columbia Hockey League is a Junior A ice hockey league from British Columbia under Hockey Canada, a subsection of the Canadian Junior Hockey League. Founded in Vernon in 1961, the BCHL now includes 17 teams. These teams play in three divisions, known as the Interior, Island and Mainland divisions. The winner of the BCHL playoffs continues on to play the Alberta Junior Hockey League champion in the Doyle Cup for the right to compete in the National Junior A Championship.

SS Sicamous is a large five decked sternwheeler commissioned by the Canadian Pacific Railway (CPR) and built by the Western Dry Dock and Shipbuilding Company for Okanagan Lake service between the fruit communities of Penticton, and other towns of Kelowna and Vernon, British Columbia. Launched in 1914, Sicamous ran for many years connecting rail lines and areas. The vessel operated until 1937 and is currently beached as a part of a heritage shipyard operated by the S.S. Sicamous Restoration Society in Penticton. The vessel today is operated both as a museum and events and banquet facility.

SS Naramata is a steam tug commissioned by the Canadian Pacific Railway (CPR) company. She pushed barges and broke ice on Okanagan Lake from 1914 to 1967. After over 50 years of service, the boat was eventually retired and left to rest in Penticton beside her sister ship, SS Sicamous. In 2001, she was purchased by the S.S. Sicamous Restoration Society and is currently undergoing extensive renovations. Naramata is the only interior steam tug to be preserved in the province of British Columbia, Canada.

SS Okanagan was a steamship owned and operated by the Canadian Pacific Railway Lake and River Service. The vessel was constructed in 1906 at Okanagan Landing and launched in 1907, becoming Okanagan Lake's second steamship. She linked the transportation hubs at both the north and south ends of Okanagan Lake (Vernon and Penticton, respectively, aiding the development of interior British Columbia with other steamships of the 1900s. The ship was retired in 1934 and sold for scrap and spare parts. Only the Stern Saloon, a room in the back of the upper deck, remains. It was moved to the SS Sicamous Heritage Park in Penticton in 2002, to undergo restoration work. 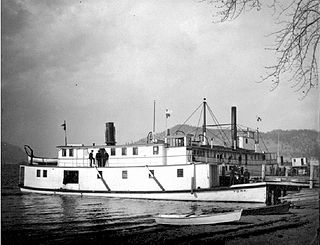 SS York was a small steamer that was used to haul freight on Okanagan Lake and Skaha Lake. York was built in 1902 by Bertram Iron Works of Toronto and assembled at Okanagan Landing. She was pre-fabricated with a steel hull and was twin-screw-driven. She was a small vessel in comparison to the many other ships on the lake; York was only 88 by 16 feet. York was capable of moving 134 tons in freight and could carry up to 90 passengers. 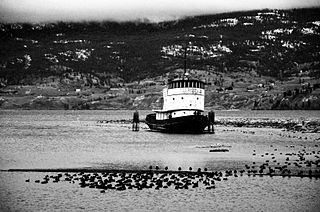 Canadian National Tug no. 6 was a diesel-powered tugboat owned and operated by the Canadian National Railway (CNR) company on Okanagan Lake, British Columbia. It was launched in 1948 and transferred railway barges between Penticton and Kelowna. It was retired in 1973, becoming the last of many tugboats to operate on Okanagan Lake. Tug 6 was moved to Penticton in 2007 to rest alongside the SS Naramata and SS Sicamous, two Canadian Pacific Railway (CPR) steamboats, as part of the S.S. Sicamous Inland Marine Museum. The ships are currently being restored by the S.S. Sicamous Restoration Society.

MV Pentowna was a motor ship that transported passengers, and later freight, on Okanagan Lake from 1926 to 1973. It was the first boat to be owned and operated by Canadian National Railway (CNR) on Okanagan Lake and the first diesel-powered boat on the lake. Pentowna served the communities between Kelowna and Penticton with two daily round trips, aiding the development of the Okanagan Valley with its modern technology and speed.

SS Kelowna was a tow boat that was operational between the years 1892–1912 on Okanagan Lake in British Columbia. It was later dismantled in Penticton.

SS Maude-Moore was a wood-burning screw steamer that provided a ferry service between the communities of Summerland, Naramata, and Penticton on Okanagan Lake in British Columbia, Canada.

SS Red Star, later called Okanagan, Lucy, and Red Star again, was a screw steamer that operated on Spallumcheen River and later Okanagan Lake in British Columbia, Canada, serving various purposes under many owners, as well as undergoing renovations and modifications from her construction in 1887 to the closing of her registry in 1915.

SS Jubilee was the second steamship on Okanagan Lake in British Columbia, Canada, owned and operated by Captain Thomas Shorts. She was built by Shorts and carpenter John Hamilton in 1887 while they were waiting for a new boiler to come in for their first steamship, SS Mary Victoria Greenhow, which needed new machinery. When it arrived, they decided to put the new boiler in the new 30 feet (9.1 m) by 8 feet (2.4 m) Jubilee instead and they put Mary Victoria Greenhow's engine in Jubilee as well. She was launched at the Okanagan Landing shipyard at 3:30 p.m. on September 22, 1887. Jubilee took about two weeks per round trip on the lake. A gold strike on Granite Creek in the Similkameen River in 1889 created business for Jubilee and Shorts built a barge to help her. However, the strike didn't last long and the barge was beached. Jubilee was also short-lived, as she froze in ice at Okanagan Landing during a cold spell in the winter of 1889–1890. She sank and in the spring, her machinery was put in Shorts' new barge, City of Vernon. The engine was reinstalled in several more ships, and the retired engine was used in a shingle mill for cutting firewood at Trinity Valley starting in 1906. Finally, Mr. and Mrs. G. H. Worth of Vernon, British Columbia, who had owned and used it for many years, donated it to the Vernon Museum and Archives in November 1957.

SS Mary Victoria Greenhow (MVG) was the first steamboat on Okanagan Lake in British Columbia, Canada. She was built by Captain Thomas Shorts and Thomas Greenhow and although she was not perfect, she was the harbinger of a long and significant line of steamships in the Okanagan.