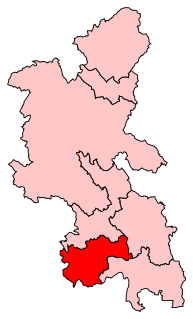 Wycombe is a constituency represented in the House of Commons of the UK Parliament since 2010 by Steve Baker, a Conservative.

Virginia is the second largest town in County Cavan, Ireland. Founded in the 17th century as a plantation town, it now holds both local industry and commuter housing.

George Semple was a notable Irish builder and architect.

Headfort House is a large country house on the southern outskirts of Kells in County Meath, Ireland. In 2004, the house was selected by the World Monuments Fund (WMF) for inclusion in its List of 100 Most Endangered Sites and is currently in use by Headfort School as a private school for children aged 3 to 13 years.