Lancashire is a non-metropolitan county and a ceremonial county in North West England. The county's administrative centre is Preston, while Lancaster is the county town. The borders of the administrative county were created by the Local Government Act 1972 and enclose a population of 1,449,300 and an area of 1,189 square miles (3,080 km2).

Bromotrifluoromethane, commonly known as Halon 1301, R13B1, Halon 13B1 or BTM, is an organic halide with the chemical formula CBrF3. It is used for fire suppression. Relative to other fire suppressing agents, such as bromochloromethane, it is far less toxic.

The Hethumids, also known as the House of Lampron, were the rulers of the Armenian Kingdom of Cilicia from 1226 to 1341. Hethum I, the first of the Hethumids, came to power when he married Queen Isabella of Armenia who had inherited the throne from her father. 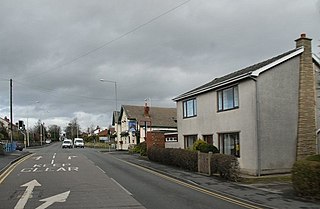 Euxton is a village and civil parish of the Borough of Chorley, in Lancashire, England. The population of the civil parish as taken at the 2011 census was 9,993, however, the population is now significantly higher due to the increase in housing developments in the village, including the Buckshaw development. The village is situated just to the west of Chorley, and to the south of Clayton-le-Woods.

Walton-le-Dale is a large village in the borough of South Ribble, in Lancashire, England. It lies on the south bank of the River Ribble, opposite the city of Preston, adjacent to Bamber Bridge. The population of the South Ribble Ward at the 2011 census was 3,792. To the west of Walton-le-Dale is the residential area of Walton Park. 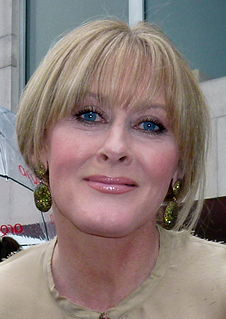 Sarah-Jane Abigail Lancashire is an English actress from Oldham, England. She graduated from the Guildhall School of Music and Drama in 1986 and began her career in local theatre, whilst teaching drama classes at the University of Salford. Lancashire found popular success in television programmes including Coronation Street, Where the Heart Is (1997–1999), Clocking Off (2000) and Seeing Red (2000) and earned widespread recognition. In July 2000, Lancashire signed a two-year golden handcuffs contract with the ITV network which made her the UK's highest paid television actress.

The year 1872 in architecture involved some significant architectural events and new buildings. 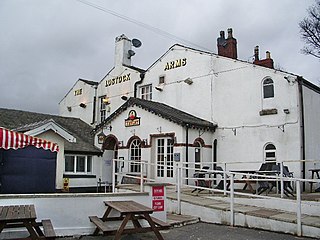 Lostock is a residential district of Bolton, Greater Manchester, England, 3.5 miles (5.6 km) west of Bolton town centre and 13 miles (20.9 km) northwest of Manchester. Historically part of Lancashire, Lostock is bounded by Deane to the southeast, Markland Hill to the northeast, and Middlebrook to the west. Bolton Wanderers' football ground, the University of Bolton Stadium, is in nearby Horwich. Lostock, along with Heaton, is one of the most expensive places to live in Bolton.

John Boothe was an Anglican priest in the 16th century. 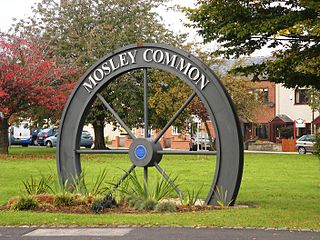 The Church of St Wilfrid is in Market Place, Standish, Wigan, Greater Manchester, England. It is an active Anglican parish church in the Diocese of Blackburn. It is recorded in the National Heritage List for England as a designated Grade I listed building. The authors of the Buildings of England series describe it as "one of the most interesting churches in Lancashire".

Crédit Agricole CIB Building is a 609 ft (186m) tall skyscraper in Manhattan, New York City. It is located at 1301 Avenue of the Americas between West 52nd and West 53rd Streets.

Quarlton was a township of the civil and ecclesiastical parish of Bolton le Moors in the Hundred of Salford, Lancashire, England. It lay 4+1⁄2 miles (7.2 km) north east of Bolton. 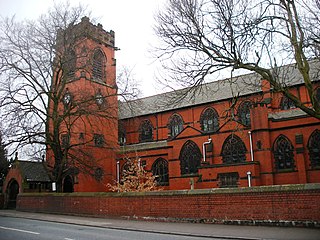 Bedford, a suburb of Leigh, Greater Manchester is one of three ancient townships, Bedford, Pennington and Westleigh, that merged in 1875 to form the town of Leigh. Historically, Bedford was in Lancashire.

German submarine U-1301 was a Type VIIC/41 U-boat of Nazi Germany's Kriegsmarine during World War II.

Sir John Atherton, of Atherton Hall, Leigh, Lancashire, was a landowner and an English politician. He was appointed High Sheriff of Lancashire in 1550, 1554, and 1560, and was a Member of Parliament (MP) of the Parliament of England for Lancashire in 1559. He was 6th in descent from Sir William Atherton MP for the same county in 1381.