Thomas Van Hamme (born 10 February 1969) is a radio and TV moderator of the Walloon Broadcaster RTBF. [1] He is currently in the prime time broadcast on the scientific GpiG A, but with Barbara Louys, It's Belgian magazine devoted to the Belgian monarchy and everything that makes excellence in Belgium. In radio, he leads the morning Viva Brussels (6h - 8:30) and the talk show of A View (8:40–9 am) on VivaCité.

In 2000, he gave the votes from the Belgian televote for the Eurovision Song Contest 2000 held in Stockholm, Sweden. He is the second son of Belgian comic book writer Jean Van Hamme.

Belgium has participated in the Eurovision Song Contest 61 times since making its debut as one of seven countries at the first contest in 1956. The only countries with more appearances are Germany (63), France (62) and the United Kingdom (62). Belgium have been absent only three times in total, in 1994, 1997 and 2001, due to low scores in the previous contests that relegated them from the contest. Belgium has won the contest once, in 1986.

RTBF is a public-service broadcasting organisation delivering radio and television services to the French-speaking Community of Belgium, in Wallonia and Brussels. Its counterpart in the Flemish Community is the Dutch-language VRT, and in the German-speaking Community it is BRF.

RTBF International was the Belgian (Wallonia) and (Brussels) international radio station owned by RTBF, available in Europe and Central Africa via satellite and online.

Belgium were represented in the Eurovision Song Contest 2009 by the French-language broadcaster Radio Télévision Belge de la Communauté Française (RTBF), who choose the Belgian entry for the contest through an internal selection. The song did not progress from the first semi-final of the competition, finishing second to last with just one point.

Belgium participated at the Eurovision Song Contest 2010, with Vlaamse Radio- en Televisieomroep (VRT) having selected the 52nd Belgian entry for Eurovision. Tom Dice was selected by VRT to represent Belgium at the Contest, held in Oslo, Norway in May 2010, performed the song "Me and My Guitar". It ended 1st in the Semi-final 1, and brought Belgium's first ever qualification since the introduction of semi-finals. The song placed 6th in the grand final, marking the first top 10 result for Belgium in the 2000s, and also become the most successful entry brought by VRT since the introduction of semi-finals.

VivaCité is a Belgian public service radio station operated by RTBF. The station launched on 29 February 2004 from the merger of regional network Fréquence Wallonie and Brussels station Bruxelles Capitale. VivaCité is the French-language equivalent of VRT Radio 2.

Belgium was represented by Nathalie Sorce with the song '"Envie de vivre" at the 2000 Eurovision Song Contest, which took place in Stockholm on 13 May. Sorce was the winner of the Belgian national final for the contest, held in Brussels on 18 February.

Belgium participated in the Eurovision Song Contest 2011 in Düsseldorf, Germany, selecting their entry through an internet selection and a national final, organised by French speaking broadcaster RTBF.

Belgium participated in the Eurovision Song Contest 2013 in Malmö, Sweden. The Belgian entry was selected through a combination of an internal selection to select the artist and a national final to select the song, organised by the Belgian broadcaster Radio Télévision Belge Francophone (RTBF). Roberto Bellarosa represented Belgium with the song "Love Kills", which qualified from the first semi-final of the competition and finished in 12th place in the final, scoring 71 points. This was Belgiums's second best placing since the introduction of the semi-finals in 2004.

Bel RTL is a commercial radio network broadcasting in Brussels and Wallonia. The station is owned by the Radio H holding company, which is part of the Luxembourg-based RTL Group.

Belgium participated in the Eurovision Song Contest 2015 with the song "Rhythm Inside", written by Loïc Nottet and Beverly Jo Scott. The song was performed by Loïc Nottet, who was selected by the Belgian broadcaster Radio Télévision Belge de la Communauté Française (RTBF) in November 2014 to represent the nation at the 2015 contest in Vienna, Austria. "Rhythm Inside" was internally selected as the song Loïc Nottet would perform at Eurovision and later premiered in March 2015. In the first of the Eurovision semi-finals "Rhythm Inside" placed second out of the 16 participating countries, securing its place among the 27 other songs in the final. In Belgium's fifty-seventh Eurovision appearance on 23 May, "Rhythm Inside" finished in fourth place, receiving 217 points and full marks from three countries. 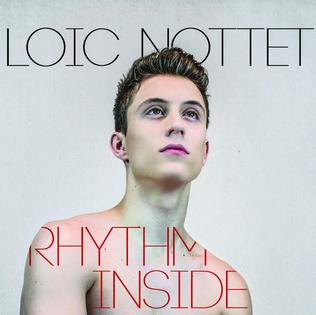 "Rhythm Inside" is a song by Belgian singer Loïc Nottet. It was released as his debut single on 10 March 2015 for radio airplay, while Sony Music Entertainment distributed it digitally one day later. The track was written by Nottet alongside Beverly Jo Scott, while production was solely handled by Luuk Cox. Previously, Nottet had participated in his native singing competition The Voice Belgique in 2014—where he finished second and thus rose to prominence—and had chosen Scott's team. "Rhythm Inside" has been described as an alternative-inspired pop, new wave, R&B, electro, soul and hip hop song, with its minimalistic instrumentation consisting of finger clicks, percussion and synthesizer pads. "Rhythm Inside" lyrically discusses moral universalism.

Maria Del Rio is a Belgian comedian, radio and television presenter of Spanish descent. She born and raised in Brussels.

Belgium participated in the Eurovision Song Contest 2017 with the song "City Lights", written by Pierre Dumoulin and Ellie Delvaux (Blanche). The song was performed by Blanche, who was selected by the Belgian broadcaster Radio Télévision Belge de la Communauté Française (RTBF) on 22 November 2016 to represent the nation at the 2017 contest in Kiev, Ukraine. "City Lights" was internally selected as the song Blanche would perform at Eurovision and later premiered on 8 March 2017.

Belgium participated in the Eurovision Song Contest 2018. Sennek was internally selected by the Belgian broadcaster Vlaamse Radio- en Televisieomroeporganisatie (VRT) on 28 September 2017 to represent the nation at the 2018 contest in Lisbon.

Belgium participated in the Eurovision Song Contest 2019. Eliot was selected internally by the Belgian broadcaster Radio Télévision Belge de la Communauté Française (RTBF) to represent Belgium in Tel Aviv with the song "Wake Up". The song is written by Pierre Dumoulin and was released on 28 February 2019.