Born in Trier, West Germany, he was already playing in Serbia with FK Timok before his transfer to FK Borac Čačak in 1993. In his first season with Borac, they became champions of the 1993–94 Second League of FR Yugoslavia and got promotion to the First League of FR Yugoslavia where he played the following two seasons making 54 appearances and scoring 3 goals in the Yugoslav top-tier. [1]

After 3 years with Borac, in summer 1996 he transferred to Belgium to K.A.A. Gent and played with them the following 7 seasons in the Belgian Pro League. [2]

In 2003, he transferred to Shanghai Shenhua and won the Chinese Jia-A League 2003. However, Shanghai Shenhua were stripped of the title on 19 February 2013 for the match-fixing scandal in that season. [3]

By January 2017, he was the director of all youth sections of FK Mladost Lučani. [6]

Fudbalski klub Borac Čačak, or simply Borac Čačak, is a professional football club based in Čačak, Serbia. The home ground is Čačak Stadium, which has seating capacity of 8,000. As of 2019–20 season, the club competes in third tier Serbian League West.

Branko Smiljanić is a Serbian football manager and former footballer.

Marinko Mačkić is a Bosnian-Herzegovinian football manager and former player. He usually played as a defender and he made his career in Serbia, Bosnia and Herzegovina and Iran.

Dragan Dragutinović is a Serbian footballer.

Uroš Stamatović is a Serbian retired professional footballer and coach. He is the head coach of Serbian White Eagles FC of the Canadian Soccer League. 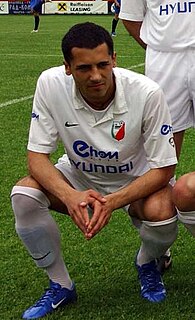 Vitomir Jelić is a Serbian former professional footballer who played as a defender.

Nemanja Milunović is a Serbian professional footballer who plays as a centre back for Turkish club Alanyaspor and the Serbia national football team.

Fudbalski klub Borac Čačak, or simply Borac Čačak, is a professional football club based in Čačak, Serbia. The word Borac in translation means fighter in English. Mainly because of the horizontally placed stripes, Borac's nickname is Zebre (Zebras). During the 2014/15 campaign they will be competing in the Serbian SuperLiga and Serbian Cup.

Nebojša Prtenjak is a Serbian professional footballer who plays as a winger.

Statistics of Second League of FR Yugoslavia for the 1994–95 season.

Milan Gašić is a Serbian football defender, who is a current captain of Trayal Kruševac. He is well known for being a son of former Serbian Minister of Defence Bratislav Gašić.

During the 2014–15 season, Red Star competed in the Serbian SuperLiga and the Serbian Cup.

During the 2015–16 season, Red Star competed in the Serbian SuperLiga, the Serbian Cup, and the UEFA Europa League.