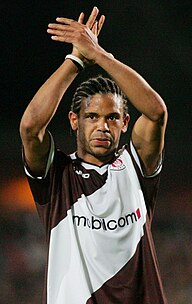 Michél Mazingu-Sinda-Dinzey, also known as Michél Dinzey, is a German born Congolese former footballer who played as a midfielder.

St. Jakob Park (help·info) is a Swiss sports stadium in Basel. It is the largest football venue in Switzerland and home to FC Basel. "Joggeli", as the venue is nicknamed by the locals, was originally built with a capacity of 33,433 seats. The capacity was increased to 42,500 for Euro 2008, which was hosted by Switzerland and Austria. After the Euro 2008 a number of seats were removed, thus creating more space between them. The capacity was therefore reduced to 38,512 for Swiss Super League matches or 37,500 seats for international matches The maximum capacity for concerts is 40,000. 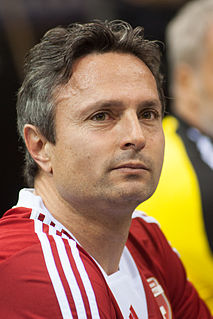 David Sesa is a former Swiss footballer who played as a midfielder or as a forward.

Ivan Dal Santo is a retired footballer from Switzerland who played as a defender. He is currently the manager of FC Zürich Frauen.

Franck Olivier Madou is an Ivorian footballer who last played for AZAL PFK in the Azerbaijan Premier League.

Alfred Emuejeraye is a Nigerian footballer.

Martin Büchel is a Liechtenstein footballer, who currently plays for FC Red Star Zürich in Switzerland.

The first Swiss football championship was held 1897–98. The championship was not organized by the Swiss Football Association and is therefore considered as unofficial. The tournament was organized by the Geneva newspaper La Suisse Sportive and its editors François-Jean Dégérine and Dr. Aimé Schwob. The championship trophy was donated by the company Ruinart. Only four of the clubs competing were members of the SFA; FC Château de Lancy, Grasshopper Club Zürich, Neuchâtel FC and La Villa Ouchy). The series A was divided into three regional groups, group A in the north, group B the district around Lausanne and group C district of Genève). The winner of each group qualified for the finals.

The Kreisliga Bayern was the highest association football league in the German Kingdom of Bavaria and, later, the state of Bavaria from 1909 to 1923. The league was disbanded with the introduction of the Bezirksliga Bayern in 1923.

Bogdan Stević is a Serbian footballer who plays for FC Srbija Zürich in the Swiss 2. Liga.

The Westkreis-Liga was the highest association football league in the Bavarian region of Palatinate, the northern parts of the Grand Duchy of Baden, the southern parts of the Prussian Rhine Province and parts of Lorraine from 1908 to 1918. The league was disbanded with the introduction of the Kreisliga Pfalz, Kreisliga Saar and Kreisliga Hessen in 1919.

Franck M'bia Etoundi is a Cameroonian professional footballer who plays for NK Slaven Belupo in the Prva HNL as a striker.

André Neury was a Swiss football defender who played for Switzerland in the 1950 and 1954 FIFA World Cup. He also played for FC La Chaux-de-Fonds, FC Locarno, and Servette FC.

The FC Unterföhring is a German association football club from the town of Unterföhring, Bavaria.

The 2017–18 Swiss Super League was the 121st season of top-tier competitive football in Switzerland and the 15th under its current name and format. Basel were the defending champions. Young Boys won the title on 28 April 2018 after a 2–1 win against Luzern, with four games to spare. It was their first league title in 32 years, having last won the league in the 1985–1986 season, and their 12th league title overall. They also ended Basel's run of eight consecutive titles.

The 2019–20 Swiss Super League is the 123rd season of top-tier competitive football in Switzerland and the 17th under its current name and format.