Gregory Thomas Yelavich is a competitive pistol shooter from Auckland, New Zealand. As well as winning numerous national pistol titles, Yelavich has the distinction of having won more Commonwealth Games medals than any other New Zealander (12). He was the New Zealand flag bearer at the closing ceremony of the 2006 Commonwealth Games. He has represented New Zealand at two Olympic Games — Seoul 1988 and Barcelona 1992.

Roland Wieser is an East German racewalker who won the bronze medal in the 20 kilometer walk during the 1980 Summer Olympics with a time of 1:25:59 hours. During his active career he measured 1.86 meters in height and 68 kg in weight. 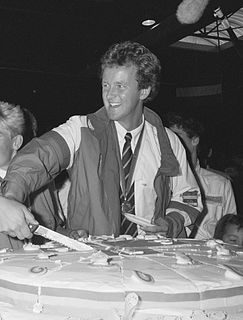 Nicolaas "Nico" Hessel Rienks is a former rower from the Netherlands and two-time Olympic gold medallist.

The Men's 20 km Race Walk at the 1980 Summer Olympics in Moscow, USSR had an entry list of 34 competitors. Seven athletes were disqualified and two did not finish in the final, which was held on Thursday, 24 July 1980.

Sandro Wieser is a Liechtensteiner professional footballer who plays for FC Vaduz.

Helmut Wieser is an Austrian modern pentathlete. He competed at the 1980 Summer Olympics.

Anatoliy Vasilyevich Solomin is a former Soviet Ukrainian race walker. Solomin competed in men's 20 km walk at the 1980 Summer Olympics and contended for the gold medal, but was disqualified from the lead shortly before the finish. He was European indoor champion in men's 5000 m walk in 1983 and briefly held the 20 km world best. He was born in Komarovka in Penza Oblast.

Events in the year 1989 in Switzerland.

Carla Wieser is an Italian gymnast. She competed in six events at the 1976 Summer Olympics.

Toni Wieser was an Austrian ski jumper. He competed in the individual event at the 1948 Winter Olympics.