Thomason is a patronymic surname meaning "son of Thomas" or a misspelling of the French surname Thomasson, Thomesson "little Thomas". There are varied spellings. Notable people with the surname include:

Arthur Wilson Thomason was a Major League Baseball outfielder who played for one season. He played in 20 games for the Cleveland Naps during the 1910 Cleveland Naps season. He was later the player/manager of the Rock Island Islanders of the Mississippi Valley League from 1922 to 1923.

Robert Lesley "Bob" Thomason, Jr. is a retired American college basketball coach. He coached the University of the Pacific Tigers men's basketball team for 25 seasons from 1988 to 2013. 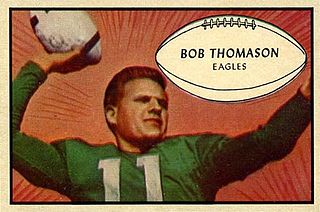 Robert Lee "Bobby" Thomason was an American football quarterback in the National Football League for the Los Angeles Rams, Green Bay Packers, and the Philadelphia Eagles. He was selected to three Pro Bowls. Thomason played college football at Virginia Military Institute and was drafted in the first round of the 1949 NFL Draft.

Cook is a surname of English origin. Notable people with the surname include:

Price or Pryce is a patronymic name derived from the Welsh "ap Rhys" meaning "son of Rhys". The given name Rhys means "enthusiasm" in Welsh. It is a common surname among those of Welsh ancestry. At the time of the British Census of 1881, its frequency was highest in Radnorshire, followed by Brecknockshire, Herefordshire, Monmouthshire, Flintshire, Shropshire, Denbighshire, Glamorgan, Carmarthenshire and Worcestershire. The surname has many other spellings including Priess, Priesz, and many others.

Reid is a surname of Scottish origin. It is the 45th most common surname in the UK. It means "red".

Anderson is a surname deriving from a patronymic meaning "son of Anders/Andrew". It originated in parallel in the British Isles and the Nordic countries.

Fowler is an English and/or Scots surname with a linguistic origin in the Old English fugelere, indicative of a person occupied as a bird-catcher.

Hanson is an Anglicized English surname of Scandinavian And German origin, created from the two words Hans and son. Spoken in English by a Norwegian and Swedish immigrant to America, for example, the sound of Hans' son comes out sounding like Hansson, shortened to Hanson. In this same example, an immigrant from Norway would have a different accent, resulting in the sound of Hans' sen, or Hanssen, shortened to Hansen.

Harper is a surname that is also commonly used as a given name in the United States.

Lindsay or Lindsey is an English surname, originally derived from the territory of Lindsey in Lincolnshire, from the Old English toponym Lindesege, i.e. "marshlands of Lincoln".

The surname Young has several origins.

Barclay is a Scottish surname. Notable people with the surname include:

Gee is a Pakistani, English or Celtic surname derived from Mac Gee or Gee, Stockport.

Thomson is a Scottish patronymic surname meaning "son of Thom, Thomp, Thompkin, or other diminutive of Thomas", itself derived from the Aramaic תום or Tôm, meaning "twin". The Welsh surname is documented in Cheshire records before and after the 1066 Norman Conquest. Variations include Thomason, Thomasson, Thomerson, Thomoson, and others. The French surname Thomson is first documented in Burgundy and is the shortened form for Thom[as]son, Thom[es]son. Variations include Thomassin, Thomason, Thomsson, Thomesson, Thomeson, and others. Thomson is uncommon as a given name.

Bloodworth is an English surname derived possibly from Blidworth in Nottinghamshire or from a similar toponym. Notable people with the surname include:

Thomasson is a surname. Notable people with the surname include: