Thommessen (formerly Thommessen Krefting Greve Lund) is one of the largest law firms in Norway and mainly deals with business law. [1] [2] The firm has over 300 employees, with more than 200 lawyers and legal assistants and offices in Oslo, Bergen, Stavanger and London. [3] The firm has 29 attorneys who are admitted into the Supreme Court. Thommessen specializes in stock exchange and transaction law, litigation and arbitration, as well as general business legal advice. The company's clients are mainly Norwegian listed companies and foreign companies. [4] Thommessen is the largest law firm within M&A in the Nordic region.

The company was founded on 19 January 1856, when Hans Christian Grønn established a private law practice in Oslo. Grønn wanted to distinguish the legal profession from the civil service and fought to make business law more international. Green was Attorney General in the period 1870-1873. The company assisted in the establishment of Norsk Hydro-Elektrisk Kvælstof-aktieselskap in 1905.

In the 1990s, there were great growth and several major mergers in the Norwegian legal profession. This development began with the establishment of ‘Thommessen & Krefting’ in 1990, through the merger between the companies ‘Thommessen Karlsrud Heyerdahl & Brunsvig’ and ‘Krefting & Løchen’ (which was established in 1954). In 1991, ‘Thommessen & Krefting’ merged with what was then Norway's largest law firm outside Oslo, the company ‘Greve, Greve, Greve & Lorentzen’ in Bergen (which was established in 1928). In 1993, parts of the law firm ‘Lund & Co’ were merged and the company's name became ‘Thommessen Krefting Greve Lund AS Advokatfirma’. From 1 September 2009, the company's name was changed to ‘Advokatfirmaet Thommessen AS’.

Naturalization is the legal act or process by which a non-citizen of a country may acquire citizenship or nationality of that country. It may be done automatically by a statute, i.e., without any effort on the part of the individual, or it may involve an application or a motion and approval by legal authorities. The rules of naturalization vary from country to country but typically include a promise to obey and uphold that country's laws and taking and subscribing to an oath of allegiance, and may specify other requirements such as a minimum legal residency and adequate knowledge of the national dominant language or culture. To counter multiple citizenship, some countries require that applicants for naturalization renounce any other citizenship that they currently hold, but whether this renunciation actually causes loss of original citizenship, as seen by the host country and by the original country, will depend on the laws of the countries involved.

Clifford Chance LLP is an international law firm headquartered in London, United Kingdom, and a member of the "Magic Circle", a group of London-based multinational law firms. It ranks as one of top ten largest law firms in the world measured both by number of lawyers and revenue. In 2019–20, Clifford Chance had a total revenue of £1.803 billion, the highest of any firm in the Magic Circle, and profits per equity partner of £1.69 million.

Borden Ladner Gervais LLP is a leading, full-service law firm in Canada. With almost two hundred years of history going back to the 1823 founding of McMaster Gervais, it is the most prominent law firm in the country, with offices in Toronto, Montréal, Vancouver, Ottawa, and Calgary. About 700 lawyers, intellectual property agents and other professionals are associated with the firm. BLG is governed by a national council composed of partners from across Canada. Sean Weir served as the firm’s first National Managing Partner until 2018, and was succeeded in the position by John Murphy of the Montreal office. 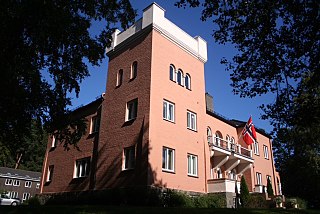 The Fridtjof Nansen Institute (FNI) is an independent research foundation specializing in research on international environmental, energy and resource management issues, including political and legal aspects.

Wilmer Cutler Pickering Hale and Dorr LLP is an American law firm with offices in the United States, Europe and Asia. It is co-headquartered in Washington, D.C. and Boston. It was formed in 2004 through the merger of the Boston-based firm Hale and Dorr and the Washington-based firm Wilmer Cutler & Pickering, and employs more than 1,000 attorneys worldwide. Notable alumni include former FBI Director Robert Mueller, Special Counsel to the investigation into Russian interference in the 2016 US presidential election;Seth Waxman, former Solicitor General of the United States; Ken Salazar, former United States senator from Colorado and United States Secretary of the Interior; and Jamie Gorelick, former United States Deputy Attorney General.

Harney Westwood & Riegels is a global offshore law firm that provides advice on British Virgin Islands, Cayman Islands, Cyprus, Luxembourg, Bermuda and Anguilla law to an international client base which includes the law firms, financial institutions, investment funds and private individuals. They have locations in major financial centres across Europe, Asia, the Americas and the Caribbean.

Deacons is an international law firm with over 300 attorneys and 700 employees worldwide.

Manatt, Phelps & Phillips, LLP is a Los Angeles-based law firm of more than 450 attorneys and other professionals founded in 1965. The firm earned revenues of $316.9 million in 2017. Donna L. Wilson is the firm's Chief Executive and Managing Partner. On June 11, 2018, Manatt announced that Wilson had been elected to succeed William Quicksilver as the firm’s Chief Executive Officer and Managing Partner. Wilson assumed the leadership role on July 1, 2019, at which time Quicksilver became the Managing Partner Emeritus.

Sigurd Segelcke Meidell was a Norwegian journalist, genealogist and novelist.

Våre falne 1939–1945 is a biographical encyclopaedia with short articles on Norwegians who lost their lives due to war-related reasons during World War II. The encyclopaedia was issued in four volumes from 1949 to 1951, by the Norwegian government, and contains around 11,000 biographies. The main editor was Arne Ording, with Gudrun Johnson and Johan Garder being responsible for the biographies.

Roschier is a Finnish founded Nordic law firm established in Helsinki in 1936. The company has offices in Finland and Sweden. The firm advises on international business law assignments and large-scale transactions. The firm's clients include domestic and international corporations, financial service and insurance institutions, investors, growth and other private companies with international operations, as well as governmental authorities.

Søylen Eiendom is a Norwegian property group, owned by Carl Erik Krefting, Runar Vatne and Hans Petter Krohnstad, with headquarters in Oslo. The group has over 250 leases with restaurants and shops in Oslo, and manages a real estate portfolio of 250 000 square meters, in addition to approximately 30,000 square meters abroad. In 2010 the Søylen Group made a profit of 66 million NOK and revenues of 340 million NOK. Chairman of the board is Runar Vatne.

Harald Nørregaard was a Norwegian supreme court advocate (høyesterettsadvokat), i.e. a lawyer with the right to appear before the Supreme Court of Norway. He founded the law firm now known as Advokatfirmaet Hjort in 1893 in Christiania, and was Chairman of the Norwegian Bar Association from 1904 to 1907. He was also one of Edvard Munch's closest friends since adolescence, adviser and lawyer. He owned several of Munch's most famous paintings. He was married to Aase Nørregaard née Carlsen (1869–1908), a painter and a close friend of Munch, and secondly to Marit Liv Nørregaard née Tillier (1885–1981), who was also a painter. Munch made several paintings and drawings portraying Nørregaard and his two wives.

Katende Ssempebwa & Co. Advocates commonly known as KATS is a Ugandan law firm whose headquarters are in Kampala, the capital city of Uganda. It is the country's longest standing premier league corporate commercial firm founded in 1969. It is the biggest full service Ugandan firm in terms of numbers and a member of the LEXAfrica network.

S&L Advocates is a Ugandan law firm headquartered in Kampala, the capital city of Uganda. It is a leading business law firm that was founded in 1980 by Paulo Sebalu and Godfrey Serunkuma Lule. The firm is a member of DLA Piper and the DLA Piper Africa Group. The firm's advocates are members of various professional bodies, including the International Bar Association, the Commonwealth Lawyers Association, the East African Law Society and the Uganda Law Society.

Shardul Amarchand Mangaldas & Company is a full-service Indian law firm. The Firm came into existence on May 11, 2015, from its predecessor Amarchand & Mangaldas & Suresh A Shroff.