Thomond RFC is an Irish rugby team based in Limerick. The colours of the club are blue and white.

Limerick is a city in County Limerick, Ireland. It is located in the Mid-West Region and is also part of the province of Munster. Limerick City and County Council is the local authority for the city. The city lies on the River Shannon, with the historic core of the city located on King's Island, which is bounded by the Shannon and the Abbey River. Limerick is also located at the head of the Shannon Estuary where the river widens before it flows into the Atlantic Ocean. With a population of 94,192, Limerick is the third most populous urban area in the state, and the fourth most populous city on the island of Ireland.

Founded in 1944 after a meeting in the old boat club near the Old Distillery in Thomondgate, the club's first competitive match was in the Munster Junior League against Garryowen at Thomond Park on Sunday, 15 October 1944. Thomond ended up winning the match by 15 points to 3. Captained by Christopher ( Willie ) Beville who was also a co-founder.

Garryowen Football Club, usually referred to as Garryowen, is a rugby union club from Limerick, Ireland. It plays in Division 1A of the All-Ireland League and historically has been one of the most successful clubs in Irish rugby union. 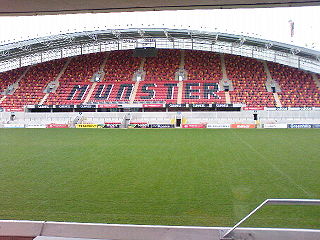 Their home ground was named in honour of club stalwart Liam Fitzgerald, who served the club for many years. He started out as a player in the late 1950s, became club captain in the 1963/64 season and held the presidency in 1984/85. Known for being a tireless worker, he could often be seen digging drains amongst other things at the ground, which was previously named Woodview Park. Johnny Hanley was amongst the founding founders who gave them great support as did his sons Sean, Ger and Brendan Hanley.

The following is a list of the Most Valuable Players in the Soviet ice hockey league, which existed from 1946 to 1991.

Below are tables of the clubs that have won the Cup Winners' Cup.

The Ulster Cup was an annual football competition held by the Irish Football League for senior clubs. It was held on fifty-one occasions until being suspended after the 1998/99 season and discontinued after a one-off re-appearance in 2002/03. The last three editions were only open to First Division sides. From the mid-1980s to the early-1990s the competition was known as the Lombard Ulster Cup due to a sponsorship deal with the Lombard & Ulster Bank. It had previously been sponsored by Morans.

The following is a list of players, both past and current, who appeared at least in one game for the Philadelphia 76ers NBA franchise.

The following is a list of players, both past and current, who appeared at least in one game for the Denver Nuggets NBA franchise.

Pontarddulais Rugby Football Club is a rugby union team from the town of Pontarddulais in Wales, UK. The club is a member of the Welsh Rugby Union and is a feeder club for the Ospreys.

The following is a list of players, both past and current, who played in at least in one game for the Seattle SuperSonics (1967–2008) or Oklahoma City Thunder (2008–present) National Basketball Association (NBA) franchise.

Club Africain Women's Handball Club is a Tunisian handball team based in Capital Tunis, that plays in Tunisian Handball League Division A.