The Thompson-Voight dragster is a twin-engined streamliner dragster. [1]

Mickey Thompson collaborated with Fritz Voight in building the dragster, which had a fully enclosed body (except the steel front wheels), including a closed canopy. [1] It was powered by a pair of 392 cu in (6,420 cc) Chrysler hemis, one facing forward to drive the rear wheels, the other facing backward to drive the front ones. [1] 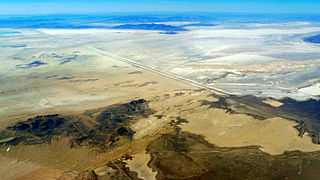 The Bonneville Salt Flats is a densely packed salt pan in Tooele County in northwestern Utah. The area is a remnant of the Pleistocene Lake Bonneville and is the largest of many salt flats located west of the Great Salt Lake. The property is public land managed by the Bureau of Land Management and is known for land speed records at the "Bonneville Speedway". Access to the flats is open to the public.

A connecting rod is a rigid member which connects a piston to a crank or crankshaft in a reciprocating engine. Together with the crank, it forms a simple mechanism that converts reciprocating motion into rotating motion.

While a reasonable success in land speed racing, the car proved too slow for drag racing, never able to top high-9 second passes or 149.50 mph (240.60 km/h) (even with its body removed), when contemporary slingshot fuellers were routinely hitting mid-9s. [1] 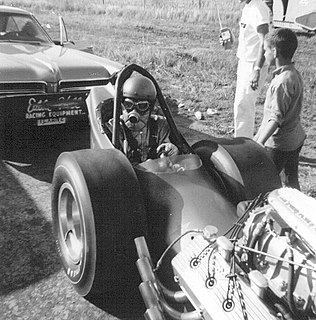 The front engine dragster is a type of racing car purpose built for drag racing. Commonly known as a "rail", "digger", or "slingshot", it is now considered obsolete, and is used only in nostalgia drag racing. Wheelbases ranged from 97 to 225 in.

The "Miller Wedge" is a pioneering streamliner dragster.

Wynns Stormer is a streamliner dragster.

Re-Entry is a streamliner dragster.

Researcher is a streamliner dragster, sponsored by National Speed Products.

Woody Gilmore is a dragster and funny car chassis builder in the 1960s and 1970s.

The Panorama City Special is a pioneering streamliner dragster.

Scuderia is a streamliner dragster.

Videoliner is a streamliner slingshot dragster, built for built for "TV Tommy" Ivo.

The Petersen and Fritz dragster, also known as the Can-Am dragster, is a streamliner dragster.

Scrimaliner is a streamliner slingshot dragster.