Thompsons Solicitors, formerly Robin Thompson & Partners, is a large firm of solicitors founded in 1921 with longstanding links to the trade union movement. It is 45th on the list of largest United Kingdom-based law firms. It specialises in personal injury claims and only acts for claimants. [1]

It moved its Birmingham offices to Embassy House in Church Street in April 2017. [2]

It was named Scotland's Law Firm of the Year at the 2011 Scottish Legal Awards. [3]

The Black Solicitors Network’s Diversity League Table in 2009 found the firm had the largest proportion of women and lawyers from an ethnic minority background of the top 100 firms in the UK. [4]

Mick Antoniw is a Welsh Labour & Co-operative politician, who has represented the constituency of Pontypridd since the National Assembly for Wales election of 2011.

Joanna Meriel Stevens is a Welsh Labour Party politician in the UK House of Commons. She was elected as the Member of Parliament (MP) for Cardiff Central in the May 2015 general election.

Vicky Philips is a Solicitor in the United Kingdom. She is Head of the Employment Rights Unit at Thompsons Solicitors, having qualified as a Solicitor in August 1996. She was previously President of the National Union of Students between 1986-1988.

It has been involved in many leading cases, especially in relation to UK labour law, including Williams v Compair Maxam Ltd and personal injuries. In the case of Ian Paterson it secured compensation totalling £1,987,000 for 89 NHS patients treated by Mr Paterson at the Heart of England NHS Foundation Trust and is acting for 350 patients treated privately at Spire Healthcare. [5]

Spire Healthcare plc is the second largest provider of private healthcare in the United Kingdom. It is listed on the London Stock Exchange.

It is often a participant in Workers' Memorial Day ceremonies in the UK. [6]

In September 2019 Thompsons' staff voted overwhelmingly in favour of strike action, following the offer of a below-inflation 2% pay rise. [7] 89% voted Yes, on a 72 per cent turn out. GMB union sources told the Morning Star that members had consistently accepted below inflation pay deals in the past but were angered this year as the firm's accounts had shown significant profits.

The Department of Health and Social Care (DHSC) is a department of Her Majesty's Government, responsible for government policy on health and adult social care matters in England, along with a few elements of the same matters which are not otherwise devolved to the Scottish Government, Welsh Government or Northern Ireland Executive. It oversees the English National Health Service (NHS). The department is led by the Secretary of State for Health and Social Care with two Ministers of State and three Parliamentary Under-Secretaries of State.

The Solicitors Regulation Authority (SRA) is the regulatory body for solicitors in England and Wales.

Irwin Mitchell is a full service law firm in the United Kingdom, established in Sheffield in 1912. The firm offers legal and wealth management services from its 15 offices, and employs more than 2,500 people.

Aamer Anwar is a Scottish-based lawyer of Pakistani background, and the current Rector of the University of Glasgow.

The National Health Service (NHS) is the system of public healthcare providers in the United Kingdom. It includes NHS England, NHS Scotland, NHS Wales, and the affiliated Health and Social Care (HSC) in Northern Ireland. They were established together in 1948 as one of the major social reforms following the Second World War. The founding principles were that services should be comprehensive, universal and free at the point of delivery. Each service provides a comprehensive range of health services, free at the point of use for people ordinarily resident in the United Kingdom, apart from dental treatment and optical care. The English NHS also requires patients to pay prescription charges with a range of exemptions from these charges.

Care UK is a British company providing health and social care. The company works with councils, Clinical Commissioning Groups and doctors to deliver care and support for older people and those with learning disabilities or mental health problems, as well as a range of healthcare services for NHS patients. 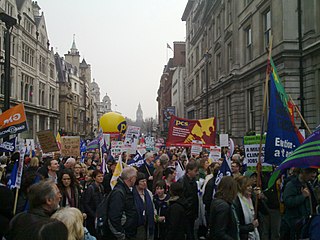 The anti-austerity movement in the United Kingdom saw major demonstrations throughout 2011. While agreeing that the country faced a financial crisis, organisations including some UK trade unions, argued that the Conservative-Liberal Democrat coalition government was pushing deep spending cuts rapidly and without proper consultations or consideration for the impact on the public. They believed that most of the government cuts were designed to target the working class, while big businesses, and financial businesses, in particular businesses with connections to British MPs, were going unpunished whilst avoiding paying any tax, despite their perception that the latter was the main reason for the financial crisis and the subsequent recession.

Andrew Joseph McDonald is a British Labour politician and solicitor. He has been the Member of Parliament for Middlesbrough in the House of Commons of the Parliament of the United Kingdom since 2012.

The legal services sector of the United Kingdom is a significant part of the national economy; it had a total output of £22.6 billion in 2013, up from 10.6 billion in 2001, and is equivalent to 1.6% of the country's gross domestic product for that year. The sector has a trade surplus is £3.1 billion in 2013 and directly employees 316,000 people, two-thirds of whom are located outside London. The UK is the world’s most international market for legal services. It allows virtually unrestricted access for foreign firms, resulting in over 200 foreign law firms with offices in London and other cities in the UK. Around half of these are US firms, with the remainder mainly from Europe, Australia and Canada. The UK legal market has a strong global position due to the popularity of English law. Some 27% of the world's 320 legal jurisdictions use English Common law.

Roberts Jackson Solicitors was a law firm headquartered in Wilmslow, Cheshire in the United Kingdom. The firm was founded in 2009 and currently employs over 150 members of staff. On 28 September 2018 Roberts Jackson merged with AWH Legal based in Manchester. AWH Legal will continue offering the services of Roberts Jackson in addition to their other legal services.

Patrick McGuire is a Scottish solicitor and solicitor advocate. He is a partner with personal injury law firm Thompsons Solicitors.

Datix Limited is a patient safety organization that produces web-based incident reporting and risk management software for healthcare and social care organizations. Its headquarters are in London, England and it has offices in Chicago, USA and Toronto, Canada.

Medical malpractice is a legal cause of action that occurs when a medical or health care professional deviates from standards in his or her profession, thereby causing injury to a patient.

Tuckers Solicitors LLP, known as Tuckers Solicitors, is a national criminal defence firm that has particular specialisation in serious crime, extradition, martial and military law, civil liberties, human rights, cyber crime and is one of the largest law firms headquartered in London. The firm featured in series of television shows about crime and disorder on national channels and has appeared on national news, commenting on various legal affairs.

Bevan Brittan is a law firm with offices in Birmingham, Bristol, Leeds and London, specialising in public sector work for local authorities, the NHS and housing associations.

Mental health in the United Kingdom involves state, private and community sector intervention in mental health issues. One of the first countries to build asylums, the United Kingdom was also one of the first countries to turn away from them as the primary mode of treatment for the mentally ill. It was Enoch Powell in 1961, then Minister of Health, who led the shift towards Care in the Community, the British version of deinstitutionalisation. The majority of mental health care is now provided by the National Health Service, assisted by the private and the voluntary sectors.