Thon may refer to:

This disambiguation page lists articles associated with the title Thon.
If an internal link led you here, you may wish to change the link to point directly to the intended article.

Italian may refer to:

Aborigine, aborigine or aboriginal may refer to: 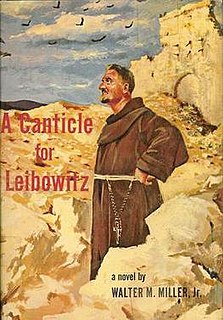 A Canticle for Leibowitz is a post-apocalyptic social science fiction novel by American writer Walter M. Miller Jr., first published in 1959. Set in a Catholic monastery in the desert of the southwestern United States after a devastating nuclear war, the book spans thousands of years as civilization rebuilds itself. The monks of the Albertian Order of Leibowitz preserve the surviving remnants of man's scientific knowledge until the world is again ready for it. 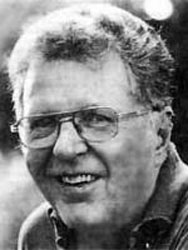 Walter Michael Miller Jr. (1923–1996) was an American science fiction writer. His fix-up novel, A Canticle for Leibowitz (1959), the only novel published in his lifetime, won the 1961 Hugo Award for Best Novel. Prior to its publication, he was a writer of short stories.

A telethon is a televised fundraising event that lasts many hours or even days, the purpose of which is to raise money for a charitable, political or other purportedly worthy cause.

Texarkana may refer to:

Super Sunday may refer to:

Leibowitz is a Jewish surname. Notable people with the surname include: 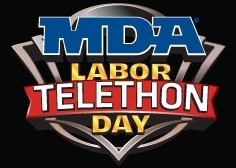 The MDA Labor Day Telethon was an annual telethon held on Labor Day in the United States to raise money for the Muscular Dystrophy Association (MDA). The Muscular Dystrophy Association was founded in 1950 with hopes of gaining the American public's interest. The show was hosted by comedian, actor, singer and filmmaker Jerry Lewis from its 1966 inception until 2010. The history of MDA's telethon dates back to the 1950s, when the Jerry Lewis Thanksgiving Party for MDA raised funds for the organization's New York City area operations. The telethon was held annually on Labor Day weekend beginning in 1966, and raised $2.45 billion for MDA from its inception through 2009.

A canticle is a hymn, psalm or other song of praise taken from biblical or holy texts other than the Psalms.

Stand Up to Cancer (SU2C) is a charitable program of the Entertainment Industry Foundation (EIF). SU2C aims to raise significant funds for translational cancer research through online and televised efforts. Central to the program is a telethon that was first televised by four major broadcast networks in over 170 countries on September 5, 2008. SU2C raised over $100 million after that evening's broadcast. Funds collected by Stand Up to Cancer are then distributed by the American Association for Cancer Research. 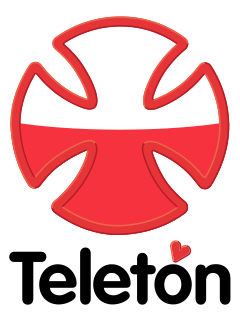 The 2008 Chilean telethon was the 22nd edition of the solidarity event in Chile, produced on 28 and 29 November 2008, which sought to raise funds for the rehabilitation of children with mobility problems.

Children in Need 2010 was a campaign held in the United Kingdom to raise money for Children in Need. 2010 marked the 30th anniversary of the appeal which culminated in a live broadcast on BBC One which began on the evening of Friday 19 November and ran until the early hours of Saturday 20th. The broadcast was hosted by Terry Wogan, with Tess Daly from 7 pm until 10 pm and Fearne Cotton from 10:35 pm until 2 am. Peter Andre hosted from the BT Tower. The show was broadcast from BBC Television Centre in London but also included regional opt-outs hosted from various locations around the UK including Cardiff and Glasgow, viewers in Northern Ireland could see the whole show Live from London for the first time instead of having their own opt out as in previous years instead the Northern Ireland concert was broadcast live on BBC Radio Ulster and highlights on BBC One Northern Ireland the next day with Reggie Yates and John Daly. They returned to Belfast every so often to show fundraising from Northern Ireland but it wasn't a Live broadcast as in previous years. In 2010 contributions fell short of the previous year's fund-raising total. The 2010 event raised £18,098,199 compared to £20,309,747 in 2009.

Comic Relief USA is an operating 501(c)(3) American charity with the vision of a just world free from poverty. Comic Relief, Inc. specialized in using the power of entertainment to drive positive change.

Children in Need 2014 is a campaign held in the United Kingdom to raise money for the charity Children in Need. 2014 marks the 34th anniversary of the appeal which culminated in a live broadcast on BBC One and BBC Two on the evening of Friday 14 November until the early hours of Saturday 15 November. The broadcast was hosted by Sir Terry Wogan, with Tess Daly, Fearne Cotton, Rochelle Humes and Nick Grimshaw as co-hosts. Shane Richie hosted the period the show was broadcast on BBC Two. The show was broadcast from BBC Elstree Centre but also includes regular regional opt-outs. Wogan didn't present the 2015 appeal because of ill health, and later died in January 2016, making this his last one.

Thon is a given name and a surname.

Thoen is a surname. It is a Norwegian name from the Old Norse Tónni. It is a Dutch variant of the name Anton and Antonius.