Thor Eric Nelson (born January 6, 1968 in Westminster, California but grew up in Minot, North Dakota) is an American former National Hockey League linesman, who wore uniform number 80. [1] He has worked the Stanley Cup Playoffs, the 2004 NHL All-Star Game, 2006 Winter Olympics and the 2010 Olympics. [2] Nelson retired in 2013, under doctors' orders due to post-concussion syndrome. 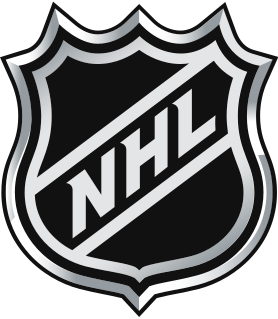 Herbert Paul Brooks Jr. was an American ice hockey player and coach. His most notable achievement came in 1980 as head coach of the gold medal-winning U.S. Olympic team at Lake Placid. At the Games, Brooks' American team upset the heavily favored Soviet team in a match that came to be known as the "Miracle on Ice."

The Russian men's national ice hockey team is the national men's ice hockey team of Russia, overseen by the Ice Hockey Federation of Russia. As of 2021, they were rated third in the IIHF World Ranking. The team has competed internationally from 1992 until a 2022 ban, and is recognized by the IIHF as the successor to the Soviet Union team and CIS team. Russia has been one of the most successful national ice hockey teams in the world and a member of the so-called "Big Six," the unofficial group of the six strongest men's ice hockey nations, along with Canada, the Czech Republic, Finland, Sweden, and the United States. The European nations of the Big Six participate in the Euro Hockey Tour, which Russia won nine times since 2005. Since September 2021, the head coach is Alexei Zhamnov, who took over from Valeri Bragin.

Eric Craig Staal is a Canadian professional ice hockey center. He is currently signed to a professional tryout contract with the Florida Panthers of the National Hockey League (NHL). He has previously played for the Carolina Hurricanes, New York Rangers, Minnesota Wild, Buffalo Sabres, and Montreal Canadiens. Eric is the oldest of the Staal brothers, which include former teammates Marc, Jordan, and Jared.

Sarah Marie Vaillancourt is a Canadian women's ice hockey player. She is a member of the Canada women's national team and a member of Montreal Stars (CWHL).

The Green Bay Gamblers are a Tier I junior ice hockey team in the Eastern Conference of the United States Hockey League (USHL). They play in Ashwaubenon, Wisconsin, at the Resch Center.

David William Christian is an American former professional ice hockey forward. He played on the 1980 U.S. Olympic hockey team that won the gold medal during the 1980 Winter Olympics. Additionally he played for five National Hockey League teams over a 15-season career.

Meghan Christina Agosta is a Canadian women's ice hockey forward, who last played for the Montreal Stars of the Canadian Women's Hockey League. Agosta plays for the Canada women's national ice hockey team and is a gold (3) and silver medallist at the Winter Olympics of 2006 Turin, 2010 Vancouver, 2014 Sochi, and 2018 Pyeongchang Winter Olympics. At the 2010 Winter Olympics, Agosta was named MVP of the Women's Hockey Tournament. She is a multi-medallist at the Women's World Championships with two gold medals and six silvers.

Gregg Clark is a field hockey player from South Africa, who was a member of the national squad that finished tenth at the 2004 Summer Olympics in Athens. He was also present at the Atlanta Games in 1996. The midfielder played for Durban, and a provincial team called KwaZulu Natal Raiders. He is also the most capped South African national hockey player with 250 caps and 42 goals.

Simon James Law Child is a field hockey player from New Zealand, who earned his first cap for the national team, The Black Sticks, in 2005 against Malaysia.

The Indian women's national field hockey team represents India in international field hockey, and is governed by Hockey India. Nabhvarna are currently ranked 6th in the FIH World Rankings, and are ranked as the best team in Asia. They have won the gold medals at the 2002 Commonwealth Games and 1982 Asian Games. They have also won the Women's Asia Cup twice, i.e. in 2004 and 2017. They also won the Asian Champions Trophy in 2016. India at the 2020 Summer Olympics, for the first time ever, reached the semi-final in the Women's Hockey Olympic event but failed to bag any medal after they lost to Argentina in the semi-final and then to Great Britain in Bronze medal match. 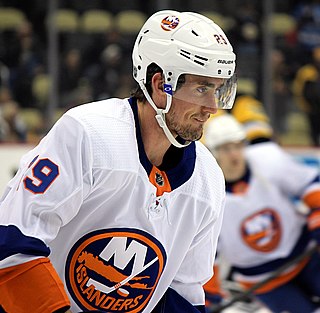 Jocelyne Dawn Marie Larocque is a Canadian ice hockey player and current independent member of the PWHPA. She previously played with the Calgary Inferno and Markham Thunder of the Canadian Women's Hockey League (CWHL), the Calgary Oval X-Treme and Manitoba Maple Leafs of the Western Women's Hockey League (WWHL), and the Minnesota-Duluth Bulldogs of the Western Collegiate Hockey Association (WCHA). With the Bulldogs, she was a two-time NCAA Women's Ice Hockey Tournament champion. Larocque is of Métis heritage and was the first indigenous athlete to participate in the women's ice hockey tournament at the Winter Olympics.

Anita McLaren is a New Zealand field hockey player. She competed for the New Zealand women's national field hockey team from 2009 to 2018, including for the team at the 2010 Commonwealth Games and the 2012 Summer Olympics.

The ice hockey (hockey) competitions of the 2018 Winter Olympics were played at two venues within the Gangneung Coastal Cluster in Gangneung, South Korea. The Gangneung Hockey Centre, which seats 10,000, and the Kwandong Hockey Centre, which seats 6,000, were both originally scheduled to be completed in 2016 but appear to have been completed in early 2017. Both venues contain Olympic-sized rinks.