Thor manufactured equipment using multiple parts that it produced. It capitalized the costs of these parts when produced. When it had inventories of parts in excess of production needs, the company's accounting practice was to write down those inventories, taking a loss based on management judgment.

However, IRS regulations accepted this "lower of cost or market" method for tax purposes only if the taxpayer could demonstrate a reduced market price, or the goods were defective or "subnormal". It did not permit companies to write down goods simply because they were not selling them. [1]

In court, the company argued that its deduction for loss should be allowed for tax purposes because it was permitted for accounting purposes. But the Court upheld the IRS regulations, saying, "There is no presumption that an inventory practice conformable to 'generally accepted accounting principles' is valid for tax purposes. Such a presumption is insupportable in light of the statute, this Court's past decisions, and the differing objectives of tax and financial accounting."

The Thor decision caused publishers and booksellers to be much quicker to destroy stocks of poorly-selling books in order to realize a taxable loss. These books would previously have been kept in stock but written down to reflect the fact that not all of them were expected to sell. [2]

The United States of America has separate federal, state, and local governments with taxes imposed at each of these levels. Taxes are levied on income, payroll, property, sales, capital gains, dividends, imports, estates and gifts, as well as various fees. In 2020, taxes collected by federal, state, and local governments amounted to 25.5% of GDP, below the OECD average of 33.5% of GDP. The United States had the seventh-lowest tax revenue-to-GDP ratio among OECD countries in 2020, with a higher ratio than Mexico, Colombia, Chile, Ireland, Costa Rica, and Turkey.

Midlist is a term in the publishing industry which refers to books which are not bestsellers but are strong enough to economically justify their publication. The vast majority of total titles published are midlist titles, though they represent a much smaller fraction of total book sales, which are dominated by bestsellers and other very popular titles.

Income taxes in the United States are imposed by the federal government, and most states. The income taxes are determined by applying a tax rate, which may increase as income increases, to taxable income, which is the total income less allowable deductions. Income is broadly defined. Individuals and corporations are directly taxable, and estates and trusts may be taxable on undistributed income. Partnerships are not taxed, but their partners are taxed on their shares of partnership income. Residents and citizens are taxed on worldwide income, while nonresidents are taxed only on income within the jurisdiction. Several types of credits reduce tax, and some types of credits may exceed tax before credits. An alternative tax applies at the federal and some state levels.

A backlist is a list of older books available from a publisher. This is opposed to newly-published titles, which is sometimes known as the frontlist.

For federal income tax purposes, the doctrine of constructive receipt is used to determine when a cash-basis taxpayer has received gross income. A taxpayer is subject to tax in the current year if he or she has unfettered control in determining when items of income will or should be paid. Unlike actual receipt, constructive receipt does not require physical possession of the item of income in question.

Under Section 1031 of the United States Internal Revenue Code, a taxpayer may defer recognition of capital gains and related federal income tax liability on the exchange of certain types of property, a process known as a 1031 exchange. In 1979, this treatment was expanded by the courts to include non-simultaneous sale and purchase of real estate, a process sometimes called a Starker exchange.

Cottage Savings Association v. Commissioner, 499 U.S. 554 (1991), was an income tax case before the Supreme Court of the United States.

Under the U.S. tax code, businesses expenditures can be deducted from the total taxable income when filing income taxes if a taxpayer can show the funds were used for business-related activities, not personal or capital expenses. Capital expenditures either create cost basis or add to a preexisting cost basis and cannot be deducted in the year the taxpayer pays or incurs the expenditure.

Arkansas Best Corporation v. Commissioner, 485 U.S. 212 (1988), is a United States Supreme Court decision that helps taxpayers classify whether or not the sale of an asset is an ordinary or capital gain or loss for income tax purposes.

Under the United States taxation system, an enterprise may deduct business expenses from its taxable income, subject to certain conditions. On occasion the Internal Revenue Service (IRS) has challenged such deductions, regarding the activities in question as illegitimate, and in certain circumstances the Internal Revenue Code provides for such challenge. Rulings by the U.S. Supreme Court have in general upheld the deductions, where there is not a specific governmental policy in support of disallowing them.

A tax levy, under United States Federal law, is an administrative action by the Internal Revenue Service (IRS) under statutory authority, generally without going to court, to seize property to satisfy a tax liability. The levy "includes the power of distraint and seizure by any means". The general rule is that no court permission is required for the IRS to execute a tax levy. While the government relies mainly on voluntary payment of tax, it retains the power of levy to collect involuntarily from those who persistently refuse to pay. The IRS can levy upon wages, bank accounts, social security payments, accounts receivables, insurance proceeds, real property, and, in some cases, a personal residence. Under Internal Revenue Code section 6331, the Internal Revenue Service can "levy upon all property and rights to property" of a taxpayer who owes Federal tax. The IRS can levy upon assets that are in the possession of the taxpayer, called a seizure, or it can levy upon assets in the possession of a third party, a bank, a brokerage house, etc. All future statutory references will be to the Internal Revenue Code unless noted otherwise.

Commissioner v. Banks, 543 U.S. 426 (2005), together with Commissioner v. Banaitis, was a case decided before the Supreme Court of the United States, dealing with the issue of whether the portion of a money judgment or settlement paid to a taxpayer's attorney under a contingent-fee agreement is income to the taxpayer for federal income tax purposes. The Supreme Court held when a taxpayer's recovery constitutes income, the taxpayer's income includes the portion of the recovery paid to the attorney as a contingent fee. Employment cases are an exception to this Supreme Court ruling because of the Civil Rights Tax Relief in the American Jobs Creation Act of 2004. The Civil Rights Tax Relief amended Internal Revenue Code § 62(a) to permit taxpayers to subtract attorney's fees from gross income in arriving at adjusted gross income. 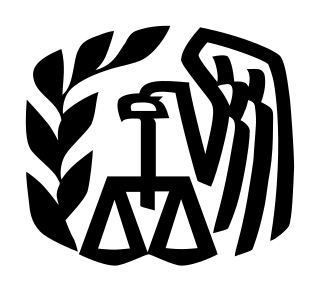 The Internal Revenue Service (IRS) is the revenue service for the United States federal government, which is responsible for collecting taxes and administering the Internal Revenue Code, the main body of the federal statutory tax law. It is part of the Department of the Treasury and led by the Commissioner of Internal Revenue, who is appointed to a five-year term by the President of the United States. The duties of the IRS include providing tax assistance to taxpayers; pursuing and resolving instances of erroneous or fraudulent tax filings; and overseeing various benefits programs, including the Affordable Care Act.

The IRS Return Preparer Initiative was an effort by the Internal Revenue Service (IRS) to regulate the tax return preparation industry in the United States. The purpose of the initiative is to improve taxpayer compliance and service by setting professional standards for and providing support to the tax preparation industry. Starting January 1, 2011 and, until the program was suspended in January 2013, the initiative required all paid federal tax return preparers to register with the IRS and to obtain an identification number, called a Preparer Tax Identification Number (PTIN). The multi-year phase-in effort called for certain paid tax return preparers to pass a competency test and to take annual continuing education courses. The ethics provisions found in Treasury Department's Circular 230 were extended to all paid tax return preparers. Preparers who have their PTINs, pass the test and complete education credits were to have a new designation: Registered Tax Return Preparer.

Corn Products Refining Company v. Commissioner, 350 U.S. 46 (1955), is a United States Supreme Court decision that helps taxpayers classify whether or not the disposition of a commodity futures contract by a business of raw materials as part of its hedging of business risk is an ordinary or capital gain or loss for income tax purposes.