Thorben-Johannes Deters (born 20 August 1995) is a German footballer who plays as a midfielder for the reserve team of Lüneburger SK Hansa. [1]

Thorben is the son of Bernd Deters, who also played for SV Meppen as a defender for the entirety of his senior career.

Robert Paisley OBE was an English footballer and manager who spent almost fifty years with Liverpool as a wing half, physiotherapist, coach and manager. Due to his achievements as Liverpool manager, Paisley is one of the most successful English football managers of all time. Paisley, Carlo Ancelotti and Zinedine Zidane are the only managers to have won the European Cup three times. During his nine-year tenure as Liverpool manager, Paisley won honours at a rate of 2.2 per season, a rate surpassed only by Pep Guardiola. He is one of five managers to have won the English top-flight championship as both player and manager at the same club, the others being Bill Nicholson, Howard Kendall (Everton), George Graham (Arsenal) and Kenny Dalglish (Liverpool), the latter as player/manager. 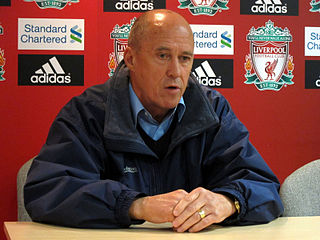 Stephen Nicol is a Scottish former professional footballer who mainly played as a defender. He played for the successful Liverpool teams of the 1980s. He was also a regular member of the Scotland national football team and represented his country at the 1986 FIFA World Cup.

Joseph Vliers, , was a Belgian football player who finished top scorer of the Belgian First Division with 25 goals and in 1958 while playing for Beerschot. He formerly played with Patria Tongeren and then with Racing de Bruxelles. In the summer of 1955, he moved to Beerschot and he eventually played with Standard Liège. Vliers played six times with the Belgian national team between 1955 and 1963. He made his international debut on 3 April 1955 in a 1–0 friendly defeat to the Netherlands. He was in the team for the 1954 FIFA World Cup but he did not play.

Thorben Marx is a retired German footballer who last played for Borussia Mönchengladbach.

Nathaniel Webster, Jr. is a former American football linebacker who played for the Tampa Bay Buccaneers, Cincinnati Bengals and Denver Broncos of the National Football League. He was drafted by the Buccaneers in the third round of the 2000 NFL Draft. He played college football at Miami (Fla.).

The Vanderbilt Commodores football program represents Vanderbilt University in the sport of American football. The Commodores compete in the Football Bowl Subdivision (FBS) of the National Collegiate Athletic Association (NCAA) and the East Division of the Southeastern Conference (SEC). They are currently coached by Derek Mason. Vanderbilt plays their home games at Vanderbilt Stadium, located on the university's Nashville, Tennessee campus.

Thorben Stadler is a German footballer who is playing for FC Astoria Walldorf. His former clubs include Karlsruher SC, Stuttgarter Kickers and SSV Jahn Regensburg.

The 2012–13 Bavarian Cup was the sixteenth edition of this competition, first held in 1998 and organised by the Bavarian Football Association (BFV). The winner, TSV 1860 Rosenheim of the Regionalliga Bayern, was qualified for the first round of the 2014–15 DFB-Pokal, the German Cup where it lost to 2. Bundesliga club VfR Aalen in the first round.

Kristaps Zommers is a Latvian professional footballer who plays as a goalkeeper, most recently for Liepāja.

The 2018–19 Serie A was the 117th season of top-tier Italian football, the 87th in a round-robin tournament, and the 9th since its organization under a league committee separate from Serie B. Juventus were the seven-time defending champions and defended their title after winning against Fiorentina on 20 April 2019. The season was run from 18 August 2018 to 26 May 2019.

The 2018–19 Regionalliga is the eleventh season of the Regionalliga, the seventh under the new format, as the fourth tier of the German football league system.

Ron-Thorben Hoffmann is a German footballer who plays as a goalkeeper for Bayern Munich.