Last updated May 22, 2022
For other uses, see Thorens (disambiguation).

Thorens is a formerly Swiss manufacturer of high-end audio equipment. Thorens is historically renowned for the range of phonographs (turntables) the manufacturer produces. In addition to audio playback equipment, Thorens is also a historical producer of harmonicas and cigarette lighters, most notably the button actuated "automatic lighter".

In 1883, the Thorens family business was first registered in Sainte-Croix (Ste-Croix), Vaud, Switzerland by Hermann Thorens. An initial producer of musical boxes and clock movements (which they were still producing in the 1950s), they started producing Edison-type phonographs in 1903.

In 1928, they produced their first electric (motor-drive) record player, and went on to produce a range of audiophile record players in the 1950s and 1960s which are, even today, regarded as high-end audio equipment, and are much sought-after, for example the belt-driven and sub-chassis suspended TD 150 which was presented 1965. Its principle is found in the Linn Sondek LP12, too. Its successor TD 160 appeared 1972 and was built nearly without discontinuity 20 years. With the TD 320 Thorens presented in 1984 changed the springs of the sub-chassis to laminated springs.

Although Thorens embarked on a cost-reduction effort in 1997, the company became insolvent in 1999. A new Suisse Thorens Export Company AG took over the assets and continued trading. The owner of the rights to the name was Heinz Rohrer.

In May 2018 Gunter Kürten, who had been manager at Denon- and Elac, became CEO and relocated operations to Germany.

As of 2019, Thorens continues to produce well-regarded turntables for playback of vinyl and 78rpm gramophone records. 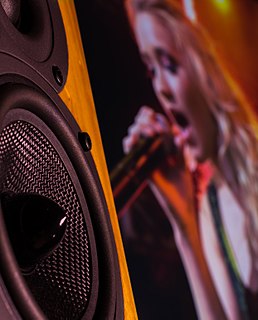 High fidelity is the high-quality reproduction of sound. It is important to audiophiles and home audio enthusiasts. Ideally, high-fidelity equipment has inaudible noise and distortion, and a flat frequency response within the human hearing range. 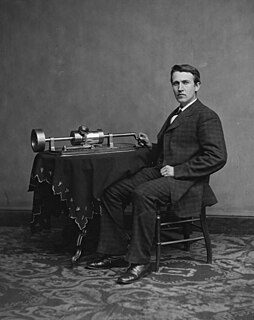 A phonograph, in its later forms also called a gramophone or since the 1940s called a record player, or more recently a turntable, is a device for the mechanical and analogue recording and reproduction of sound. The sound vibration waveforms are recorded as corresponding physical deviations of a spiral groove engraved, etched, incised, or impressed into the surface of a rotating cylinder or disc, called a "record". To recreate the sound, the surface is similarly rotated while a playback stylus traces the groove and is therefore vibrated by it, very faintly reproducing the recorded sound. In early acoustic phonographs, the stylus vibrated a diaphragm which produced sound waves which were coupled to the open air through a flaring horn, or directly to the listener's ears through stethoscope-type earphones. 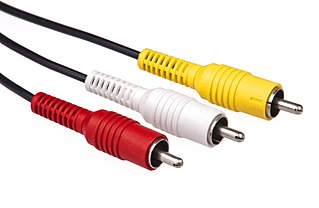 The RCA connector is a type of electrical connector commonly used to carry audio and video signals. The name RCA derives from the company Radio Corporation of America, which introduced the design in the 1930s. The connectors male plug and female jack are called RCA plug and RCA jack.

A phonograph record, or simply a record, is an analog sound storage medium in the form of a flat disc with an inscribed, modulated spiral groove. The groove usually starts near the periphery and ends near the center of the disc. At first, the discs were commonly made from shellac, with earlier records having a fine abrasive filler mixed in. Starting in the 1940s polyvinyl chloride became common, hence the name "vinyl". In the mid-2000s, gradually, records made of any material began to be called vinyl disc records, also known as vinyl records or vinyl for short. 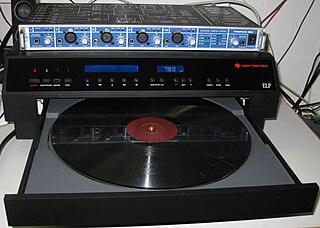 A laser turntable is a phonograph that plays standard LP records using laser beams as the pickup instead of using a stylus as in conventional turntables. Although these turntables use laser pickups, the same as Compact Disc players, the signal remains in the analog realm and is never digitized.

There are three main types of phonograph turntable drives being manufactured today: the belt-drive, idler-wheel and direct-drive systems; the names are based upon the type of coupling used between the platter of the turntable and the motor. In a belt-drive turntable the motor is located off-center from the platter, either underneath it or entirely outside of it, and is connected to the platter or counter-platter by a drive belt made from elastomeric material.

Linn Products is an engineering company that manufactures hi-fi and audio equipment. Founded by Ivor Tiefenbrun in Glasgow, Scotland, in 1973, the company is best known as the manufacturer of the Linn Sondek LP12 turntable.

A record changer or autochanger is a device that plays several phonograph records in sequence without user intervention. Record changers first appeared in the late 1920s, and were common until the 1980s.

ReVox is a brand name, registered by Studer on March 27, 1951, for Swiss audio equipment.

Acoustic Research was a Cambridge, Massachusetts-based company that manufactured high-end audio equipment. The brand is now owned by VOXX. Acoustic Research was known for the AR-3 series of speaker systems, which used the 12 in (300 mm) acoustic suspension woofer of the AR-1 with newly designed dome mid-range speaker and high-frequency drivers. AR's line of acoustic suspension speakers were the first loudspeakers with relatively flat response, extended bass, wide dispersion, small size, and reasonable cost. 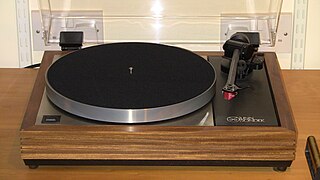 The Linn Sondek LP12 is a transcription turntable produced by Glasgow-based Linn Products, manufacturers of hi-fi, home theatre, and multi-room audio systems. Its name is derived from the 12" vinyl LP. 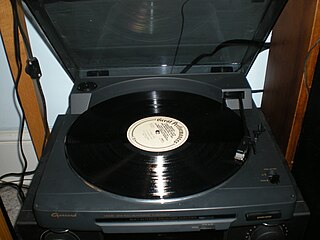 The Garrard Engineering and Manufacturing Company of Swindon, Wiltshire, was a British company that was famous for producing high-quality gramophone turntables. It was formed by the jewellers Garrard & Co in 1915. The company was sold to Plessey, an electronics conglomerate, in 1960. During the period 1976-1978, Garrard developed demonstrators of the novel video disc technology. Although the team recognised the future potential of this data storage technology, Plessey chose not to invest. After several years in decline, Garrard was sold by Plessey to Gradiente Electronics of Brazil in 1979 and series production was moved to Brazil (Manaus). The remaining Garrard research and development operation in Swindon was reduced to a skeleton operation until completely shut down in 1992. Then, Gradiente licensed the Garrard name to Terence O'Sullivan, who operated as Loricraft Audio, in 1997.

Elektromesstechnik (EMT) is a manufacturer of phonograph turntables and professional audio equipment, including a well-regarded line of artificial reverberation devices beginning with the EMT 140 plate reverb. The company was founded by Wilhelm Franz.

Ortofon is a Danish manufacturer of electronic audio equipment. It is the world's largest producer of magnetic cartridges for phonograph turntables, with 500,000 cartridges sold annually.

Lenco is a Dutch owned brand of audio & video equipment, part of Commaxx International NV and a sister company of Trebs BV.

Carad was a brand of the Ets. G.L. Carpentier, a small Belgian electronics manufacturer located in Kuurne, near Kortrijk. It existed from 1925 to 1975. At the height of its activities around 1970, the company employed about 400 people.