Thornewill and Warham Ltd was a metal hardware and industrial metalwork manufacturer, later an engineering company, based in Burton upon Trent, Staffordshire, England. Under different names it traded from 1740 until 1929, becoming a notable producer of steam engines and railway locomotives. It also constructed two footbridges across the River Trent in Burton.

The Thornewill family were in the 'iron' business from at least 1732, [1] when Thomas Thornewill (born 1691) was described as an 'Iron Merchant', and his son Francis at his marriage in 1767 was a "yeoman and edged-tool maker of Stretton". By 1740, Thomas and his brother Francis had established a business on the south side of New Street, making spades and other edged tools. [1]

The Earl of Uxbridge owned Clay Mill, which had been abandoned as a corn mill around 1730. In 1753 William Wyatt, the Earl of Uxbridge's steward, wrote that there was "nothing of any value remaining except the building and those in a very shattered and ruinous condition. I had a person with me to take the place in the conditions it is now in for a blade mill, that is, a mill for grinding all sorts of large edged tools and iron plates and for the plating of iron". [2] In 1755 Thomas Thornewill took the lease of Clay Mill at an annual rent of 10 guineas. Thornewill spent over £300 on repairs to the building and its conversion into "a plating Forge for hammering and plating of iron into thin plates". [3] The Clay Mills site was bought by Thornewills in 1786 for £3,220. [1]

In 1792 there is reference to "Mr. Thornewill, ironmonger, of Clay Mills, Stretton". By 1829 brothers John & Francis Thornewill, Iron Merchants and Iron and Brass Founders were established in New Street.

John Thornewill died in 1836, and his brother Francis died unmarried in 1846, leaving the business in the hands of John's son Robert (born 22 January 1799).

In 1849, Robert (aged 50) entered into a partnership with 29-year-old John Robson Warham (born 20 November 1820), an engineer from South Shields who joined the Thornewill company in about 1842, [4] and the firm became Thornewill and Warham. Robert died on 16 July 1858, aged 59, and his share of the business (and the running of it) was taken over by his 52-year-old widow, Martha Hammond Thornewill, [5] née Wright, from Eyam in Derbyshire.

Until about 1845, the business was mainly a hardware firm making iron, copper and brass goods mainly used in the Burton breweries, but from 1845 onwards it became an engineering firm described as "iron and brass founders and steam engine makers", manufacturing engines for local collieries and breweries. [1]

By 1851 Thornewill & Warham was described as "Iron Merchants and Steam Engine, Machinery, etc. Manufacturers," [6] and employed 75 men and 25 boys. [1] By 1861, they had 178 employees, [7] mainly engaged in making colliery winding engines, [8] and locomotives, providing the Burton breweries with most of their locomotives between 1860 and 1880; most of Bass & Co's 11 locomotives were supplied by the company. [9]

In 1868, a new partnership was formed, in which Martha Thornewill, now aged 62, held half the shares, her son Robert (now aged 25) five twelfths, and John Robsom Warham the remaining twelfth. Warham died of bronchitis on 26 March 1886 aged 66 [4] (and was buried in Stapenhill Cemetery); [10] Martha died in 1889 aged 83, and her half-share in the business passed to her three sons, the other two of whom Robert bought out to become sole owner by 1893.

By 1870 Thornewill and Warham was supplying steam engines to Scotland, London and South Wales, and after 1890 were exporting winding, pumping and hauling engines all over the world - to collieries, cotton mills, gold and diamond mines and waterworks in China, Japan, Borneo, India, South Africa, South America and Australia, at least 329 in all. [1] [11]

Apart from the manufacture of steam engines, the company was also notable for its construction engineering: it provided and installed much of the ironwork in the Burton breweries between 1850 and 1890. [12]

In 1883 and 1884, the company built an iron bridge to replace a wooden footbridge connecting Burton to Andresy island. This led to the company's appointment to build a further bridge in the town. [7] The construction in 1889 of Burton's Ferry Bridge and the connecting viaduct to Bond End, at a total cost of just over £10,000, was one of the firm's major achievements in that field, [11] [13] the bridge being designed by Edward William Ives (1851-1914?), [14] with assistance from Alfred Andrew Langley, chief engineer of the Midland Railway. [15]

Robert Thornewill, sole owner, died on 22 November 1914 aged 71; his only son, Robert Surtees Thornewill, was a clergyman in London's East End with no interest in engineering. Eventually, in 1919 Thornewill and Warham Ltd went into liquidation and a new company of the same name was formed. [1] This was taken over in 1929 by a rival, S. Briggs & Co. Ltd. of Burton [1] [16] [17] (today Briggs plc), a manufacture of brewery equipment.

Burton's Ferry Bridge remains in service across the River Trent, having twice been renovated (in the 1970s and in 2015-2016), as does the nearby Andresey Bridge.

Examples of Thornewill and Warham steam engines can be found in various museums and preserved buildings, including: 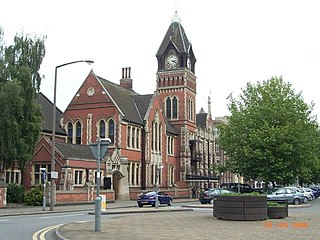 Burton upon Trent, also known as Burton-on-Trent or simply Burton, is a market town in Staffordshire, England, close to the border with Derbyshire. In 2011, it had a population of 72,299. The demonym for residents of the town is Burtonian. Burton is 11 miles (18 km) southwest of Derby, 27 miles (43 km) northwest of Leicester, 28 miles (45 km) west-southwest of Nottingham and 20 miles (32 km) south of the southern entrance to the Peak District National Park. 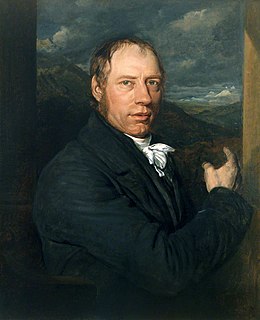 Richard Trevithick was a British inventor and mining engineer from Cornwall, England, UK. The son of a mining captain, and born in the mining heartland of Cornwall, Trevithick was immersed in mining and engineering from an early age. He performed poorly in school, but went on to be an early pioneer of steam-powered road and rail transport. His most significant contribution was the development of the first high-pressure steam engine. He also built the first working railway steam locomotive. The world's first locomotive-hauled railway journey took place on 21 February 1804, when Trevithick's unnamed steam locomotive hauled a train along the tramway of the Penydarren Ironworks, in Merthyr Tydfil, Wales. 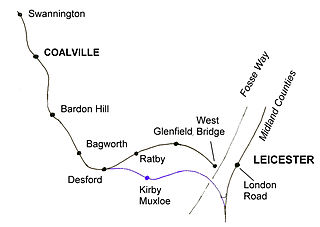 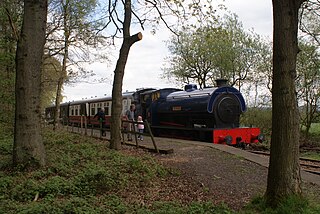 The Foxfield Railway is a preserved standard gauge line located south east of Stoke-on-Trent. The line was built in 1893 to serve the colliery at Dilhorne on the Cheadle Coalfield. It joined the North Staffordshire Railway line near Blythe Bridge. It is open at weekends and operates trains on Sundays, Bank Holidays and some Saturdays from April to October and Santa Special trains in December. 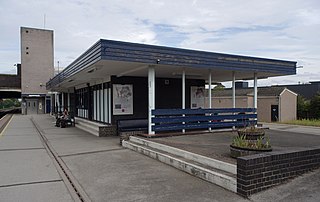 Burton-on-Trent railway station is a mainline railway station located in the town of Burton upon Trent, Staffordshire, England. It is owned by Network Rail and managed by East Midlands Railway, although only CrossCountry services call at the station.

Haigh Foundry was an ironworks and foundry in Haigh, Lancashire, which was notable for the manufacture of early steam locomotives.

The Derbyshire and Staffordshire extension of the Great Northern Railway was an English railway network built by the GNR to get access to coal resources in the area to the north and west of Nottingham. The Midland Railway had obstructed the GNR in its attempts to secure a share of the lucrative business of transporting coal from the area, and in frustration the GNR built the line. The line was forked: it reached Pinxton in 1875 and a junction with the North Staffordshire Railway at Egginton, approaching Burton on Trent in 1878. The line cut through Derby, resulting in considerable demolition of housing there.

Joseph Wilkes (1733–1805) was an 18th-century English industrialist and agricultural improver born in the village of Overseal in Derbyshire but more commonly associated with the village of Measham in Leicestershire. 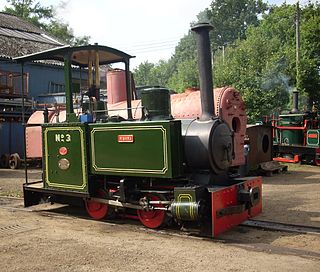 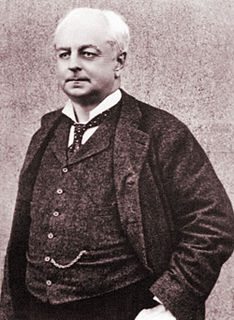 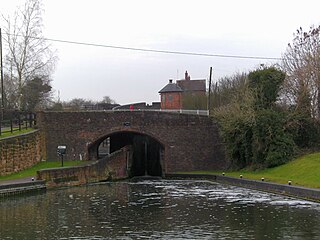 The Bratch is an area of Wombourne in South Staffordshire, England, noted for its industrial heritage and more recently as a way station for walkers, riders and cyclists. Formerly, it was a small, separate hamlet, and became fully absorbed into Wombourne only in the 20th century. Population details for the 2011 census can be found under Wombourne. 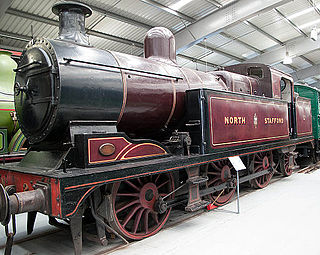 The North Staffordshire Railway (NSR) New L Class was a class of 0-6-2T steam locomotive designed by John H. Adams, third son of William Adams. They were designed as a development as the previous L Class, adding a boiler common to the M Class and differed from the L Class with, amongst other things higher bunker sides and new cab roofs, and the abandonment of the cast safety valve cover. 28 were built between 1908 and 1923, with the final four constructed under the auspices of the newly formed LMS with the whole class withdrawn by the end of 1937. There is one survivor.

Dovecliff Hall is a large Georgian country house in Stretton, East Staffordshire, England which is now a country house hotel. It is a Grade II listed building. 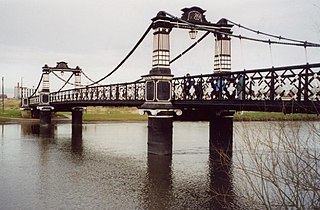 Ferry Bridge is a Victorian pedestrian bridge over the River Trent in Staffordshire, England. The bridge and its extension, the Stapenhill Viaduct, link Burton upon Trent town centre to the suburb of Stapenhill half a mile away on the other side of the river. 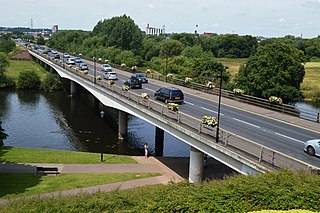 St Peter's Bridge carries the A5189 road across the River Trent in Burton upon Trent, Staffordshire, England. Opened in 1985, the 800-metre (2,600 ft) long reinforced concrete bridge is the most recent road crossing of the Trent. It was closed for more than two months in 2017 for major repair works.

Stapenhill Gardens is a park in the Stapenhill neighbourhood of Burton-on-Trent, in England. It mainly comprises the former site of Stapenhill House, which was donated to the town in 1933, woodland, lawn, wild flower meadows and formal planted areas along a 1,250-metre (4,100 ft) stretch of the River Trent. A public space, it includes a large cement-rendered sculpture of a swan that has been described as a "Burton landmark".

Old Millclose Mine was a lead mine near Wensley, in Derbyshire, England. The engine house of the mine survives as a ruin; it is a scheduled monument.