Thoros, alternative transliteration T'oros, is the Armenian variant of the Greek name Theodoros (Theodore). It may refer to:

This disambiguation page lists articles associated with the title Thoros.
If an internal link led you here, you may wish to change the link to point directly to the intended article. 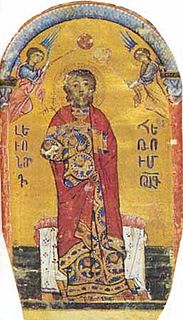 Leo II or Leon II was king of the Armenian Kingdom of Cilicia, ruling from 1269/1270 to 1289. He was the son of King Hetoum I and Queen Isabella and was a member of the Hetoumid family.

Thoros III or Toros III was king of the Armenian Kingdom of Cilicia, ruling from 1293 to 1298. He was the son of Leo II of Armenia and Kyranna de Lampron, and was part of the Hethumid dynasty. In 1293 his brother Hethum II abdicated in his favour; however, Thoros recalled Hethum to the throne in 1295. The two brought their sister Rita of Armenia to Constantinople to marry Michael IX Palaiologos in 1296, but were imprisoned upon their return in Bardzrberd by their brother Sempad, who had usurped the throne in their absence. Thoros was murdered, strangled to death on July 23, 1298 in Bardzrberd by Oshin, Marshal of Armenia, on Sempad's orders.

Theodore may refer to:

Marash is the Armenian and Arabic name of Kahramanmaraş. It may also refer to:

Theodore Rshtuni, also spelled Theodoros Ṛštuni, equated with Pasagnathes (Πασαγνάθης), the "patrikios of the Armenians" from the chronicle of Theophanes the Confessor, was an Armenian nakharar, famous for resisting the first Arab invasions of Armenia. After the previous ishkhan (prince) David Saharuni was overthrown by other nakharars in 638 or 640, Theodore Rshtuni became the leading prince of Byzantine Armenia under the same title as his predecessor, "Prince of Armenia".

King Leo, also Leon, Levon, and Lewon may refer to:

Emperor Theodore may refer to:

Tserents, was a prominent Armenian writer.

The Church of Saint Toros is an Armenian Orthodox church in the Armenian Quarter of Jerusalem.

Theodore is a masculine given name. It comes from the Ancient Greek name Θεόδωρος (Theódoros) meaning "gift of God". The name was borne by several figures in ancient Greece, such as Theodorus of Samos and Theodorus of Byzantium, but gained popularity due to the rise of Christendom.

Theodoros or Theodorus is a masculine given name, from which Theodore is derived. The feminine version is Theodora. It may refer to:

Tawadros is an Arabic variant (تواضروس) of the name Theodore, both originating from the Greek Θεόδωρος Theōdoros.

Drazark monastery, a destroyed monastic complex of Armenian Apostolic Church in Adana province of modern Turkey, which lies about 40 km. northwest of the city of Sis - historical capital of Cilician Armenia, at one of inaccessible slopes of Cilician Taurus range.

Theodore of Alexandria may refer to: