Those in Peril is a book by the author Wilbur Smith. The book focuses on the lives of billionaire Hazel Bannock, who is the owner of the Bannock Oil Corp and Major Hector Cross, an ex-SAS operative and the owner of a security company Cross Bow Security. This company has been contracted to protect Hazel Bannock and her business interest and the story unfolds when Hazel's daughter is hijacked by Somali pirates.

Smith described the novel as "another pretty tale of sex, violence and mayhem with a few belly laughs thrown in for good measure." [1]

Smith wanted to write a stand-alone book about a mother being deprived of her adored child, then having to get help from one of his tough guys. "I wanted her to be tough, too," he says, "because I'm a feminist." [2]

When he owned an island in the Seychelles, he and his crew once came across Somali pirates.

They didn't acknowledge us – rare among sailors – but I've never forgotten this guy, tall and very handsome, as hypnotic as a black mamba, just standing there. His eyes were dead. I guess I was lucky they weren't kidnapping that day; I could so easily have been taken, but that image has stayed with me. I knew I would use it one day.... [Modern day pirates are ] using sophisticated radar equipment and offshore accounts. I think the disturbing thing about Somalia is the fact this is a country where there are few economic opportunities, so the pirates are seen as glamorous, and often held in awe by young boys who aspire to their lifestyle. [2]

In a review, Christopher Bray from the Express described the plot as fairly predictable, with some clichéd descriptions but also defies anyone who has picked it up to put it down as the story is exciting. [3]

The reviewer of Publishers Weekly said that "the author's vast legions of fans should embrace the lurid action, the larger-than-life characters, and the heated prose with their usual enthusiasm." [4]

The film rights for Those in Peril have been acquired by Reelart Media in 2012 but no film has resulted. [5]

Charlotte's Web is a children's novel by American author E. B. White and illustrated by Garth Williams; it was published on October 15, 1952, by Harper & Brothers. The novel tells the story of a livestock pig named Wilbur and his friendship with a barn spider named Charlotte. When Wilbur is in danger of being slaughtered by the farmer, Charlotte writes messages praising Wilbur in her web in order to persuade the farmer to let him live.

Wilbur Addison Smith is a British novelist specialising in historical fiction about the international involvement in Southern Africa across four centuries, seen from the viewpoints of both black and white families.

Christopher James Paolini is an American author. He is best known for The Inheritance Cycle, which consists of the books Eragon, Eldest, Brisingr, Inheritance, and most recently The Fork, the Witch and the Worm. He lives in Paradise Valley, Montana, where he wrote his first book. 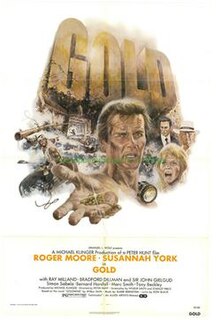 Gold is a 1974 British thriller film starring Roger Moore and Susannah York and directed by Peter R. Hunt. It was based on the 1970 novel Gold Mine by Wilbur Smith. Moore plays Rodney "Rod" Slater, general manager of a South African gold mine, who is instructed by his boss Steyner to break through an underground dike into what he is told is a rich seam of gold. Meanwhile, he falls in love with Steyner's wife Terry, played by York. In the United States, the film was only released as part of a double bill.

A General History of the Robberies and Murders of the most notorious Pyrates is a 1724 book published in Britain containing biographies of contemporary pirates, which was influential in shaping popular conceptions of pirates. Its author uses the name Captain Charles Johnson, generally considered a pseudonym for one of London's writer-publishers. The prime source for the biographies of many well-known pirates, the book gives an almost mythical status to the more colourful characters, and it is likely that the author used considerable licence in his accounts of pirate conversations. The book also contains the name of the pirate flag the Jolly Roger and shows the skull and bones design.

The Shipping News is a 2001 Canadian-Swedish-American drama film directed by Lasse Hallström, based on Annie Proulx's Pulitzer Prize-winning book of the same title.

Kyle Smith is an American critic, novelist, and essayist. He is a former film critic for the New York Post and is currently critic-at-large at National Review as well as theater critic for The New Criterion. A writer in Entertainment Weekly described Smith's film-reviewing style "an exercise in hilarious hostility". He has been dubbed "America's most cantankerous film critic" by The Atlantic magazine, and has a tendency to criticize films with African-American themes. Smith has also contributed to The Wall Street Journal, People, New York, Forbes, The New York Times, Commentary and The Weekly Standard. 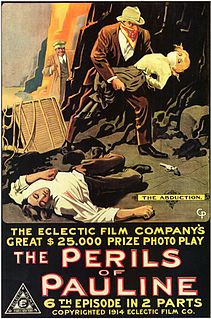 The Perils of Pauline is a 1914 American melodrama film serial shown in weekly installments, featuring Pearl White as the title character. Pauline has often been remembered as a famous example of a damsel in distress, although contemporaneous reception and some analyses hold that her character was more resourceful and less helpless than the classic damsel stereotype, and she was therefore a considerable influence on early female audiences and attracted much critical attention. Pauline is menaced by assorted villains, including pirates and Indians. Despite popular associations, Pauline was never tied to railroad tracks in the series, an image that comes instead from contemporaneous films such as Barney Oldfield's Race for a Life.

When the Lion Feeds (1964) is the debut novel of Rhodesian writer Wilbur Smith. It introduces the Courtney family, whose adventures Smith would tell in many subsequent novels. In 2012, Smith said the novel remained his favourite because it was his first to be published.

The Fault in Our Stars is a novel by John Green. It is his fourth solo novel, and sixth novel overall. It was published on January 10, 2012. The title is inspired by Act 1, Scene 2 of Shakespeare's play Julius Caesar, in which the nobleman Cassius says to Brutus: "The fault, dear Brutus, is not in our stars, / But in ourselves, that we are underlings." The story is narrated by Hazel Grace Lancaster, a 16-year-old girl with thyroid cancer that has affected her lungs. Hazel is forced by her parents to attend a support group where she subsequently meets and falls in love with 17-year-old Augustus Waters, an ex-basketball player and amputee. An American feature film adaptation of the novel directed by Josh Boone and starring Shailene Woodley, Ansel Elgort, and Nat Wolff was released on June 6, 2014. A Hindi feature film adaptation is set to be released in May 2020. Both the book and its American film adaptation were met with strong critical and commercial success.

Birds of Prey is a 1997 novel by Wilbur Smith set in the late 17th century. The novel was the first in the third sequence of the Courtney series of novels, and as of 2013 was chronologically the first in the entire series.

Monsoon is a 1999 novel by Wilbur Smith. Monsoon follows the adventures of Hal's sons, William, Tom, Guy and Dorian. An Arab Corsair is ambushing merchant and war ships in the Indian Ocean and the English send Hal to contest him. The twin brothers, Tom and Guy, fall out over a woman and Guy leaves for India while William remains home in England. Dorian is captured by slavers and sold to the Prince of Oman, al-Malik, who adopts him as his son. There he meets Yasmini, one of the many daughters of the Prince. They fall in love and Dorian saves her from Zayn al-Din, another of the Prince's sons. Eventually Dorian and Yasmini run away, damned for committing incest. Many years of searching leave Tom tired of battle but by chance he faces Dorian in battle and almost kills him. Recognizing each other, they reunite and escape to Africa.

Blue Horizon is a 2003 novel by Wilbur Smith.

The Triumph of the Sun is a novel by Wilbur Smith set during the Siege of Khartoum. Smith himself said the following about the novel:

"That incident had all the elements of a great story setting because you have the captive characters who are having to interact with each other because there is no escape – siege conditions. Also the river. I’m fascinated by the great rivers of Africa. Played against that was a sort of island setting in the desert. Then it had such powerful influences at work – the British Empire against the revolting Mahdists, the conflict of religions, Gordon and the Mahdi, both of them totally fanatical, believing that they spoke directly to God, and unbendable and unbending."

The Fault in Our Stars is a 2014 American romantic drama film directed by Josh Boone, based on the 2012 novel of the same name by John Green. The film stars Shailene Woodley and Ansel Elgort; with Laura Dern, Sam Trammell, Nat Wolff, and Willem Dafoe playing supporting roles. Woodley plays Hazel Grace Lancaster, a sixteen-year-old cancer patient who is forced by her parents to attend a support group, where she meets and subsequently falls in love with Augustus Waters, another cancer patient, played by Elgort.

Tough Guys Don't Dance (1984) is a noir thriller and murder mystery novel by American writer, Norman Mailer, reminiscent of the works of Dashiell Hammett, Mickey Spillane, and Raymond Chandler. The novel was written in only two months in order to fulfill a contractual obligation. The book was adapted into a film, directed by Mailer, in 1987. 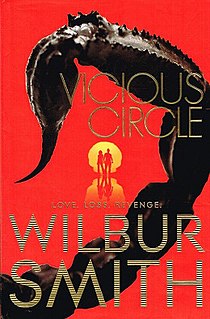 Vicious Circle is a 2013 novel by Wilbur Smith.

Melissa Albert is an American author of young adult fiction.