Before her term as the Parliamentarian, she served as the Bhimavaram municipal Chairperson 2005–2010. She is also TDP District party President for West Godavari in Andhra Pradesh from 2009 to till.[ citation needed ]

She has four daughters and one son.[ citation needed ] 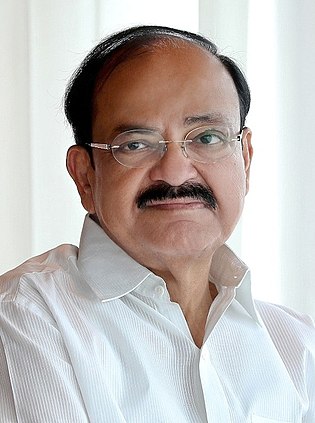 Muppavarapu Venkaiah Naidu is an Indian politician and the current Vice President of India and the Chairman of the Rajya Sabha, in office since 11 August 2017. Previously, he served as the Minister of Housing and Urban Poverty Alleviation, Urban Development and Information and Broadcasting in the Modi Cabinet. A prominent leader of the Bharatiya Janata Party, he also served as its national president from 2002 to 2004. Earlier, he was the Union Cabinet Minister for Rural Development in the Atal Bihari Vajpayee government. He took the oath as Vice-President of India and the Chairman of Rajya Sabha on 11 August 2017. He served as President of the Indian Institute of Public Administration, Chancellor of Panjab University, Delhi University, Pondicherry University and the President of the Indian Council of World Affairs in his capacity as Vice President. 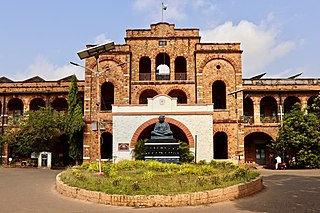 Eluru is a city and the district headquarters of West Godavari district in the Indian state of Andhra Pradesh. It is one of the 14 municipal corporations in the state and the mandal headquarters of Eluru mandal in the Eluru revenue division. The city is on the Tammileru river. The city is well known for its wool-pile carpets and hand woven products. As of 2011 Census of India, the city had a population of 217,876. Its history dates back to the second century CE.

Khammam District is a district in the eastern region of the Indian state of Telangana. The city of Khammam is the district headquarters. The district shares boundaries with Suryapet, Mahabubabad, Bhadhradhri districts and with Andhra pradesh state.

Amalapuram is a town in East Godavari district of the Indian state of Andhra Pradesh. It is the mandal and divisional headquarters of Amalapuram mandal and Amalapuram revenue division. The town is situated in the delta of Konaseema.

Makineni Basavapunnaiah BA was an Indian Communist leader who was a member of Politburo of the Communist Party of India (Marxist). He was also the editor of the central organ of CPI (M), People's Democracy magazine. He was a member of the Rajya Sabha for 14 years from 3 April 1952 to 2 April 1966.

Elections in Andhra Pradesh state, India are conducted in accordance with the Constitution of India. The Assembly of Andhra Pradesh creates laws regarding the conduct of local body elections unilaterally while any changes by the state legislature to the conduct of state level elections need to be approved by the Parliament of India. In addition, the state legislature may be dismissed by the Parliament according to Article 356 of the Indian Constitution and President's rule may be imposed.

Dr. K.V P Ramachandra Rao, is a Member of Parliament in India and chief adviser to the former chief minister of Andhra Pradesh Y. S. Rajasekhara Reddy. He belongs to Indian National Congress. He pressed for Y. S. Jagan Mohan Reddy to take on the post of Chief Minister. After Bifurcation of Andhra Pradesh he is allotted to Telangana state by draw of lots.

Kommareddi Suryanarayana was a Rajya Sabha and Lok Sabha member in Indian Parliament, an Indian freedom activist and Gandhian. 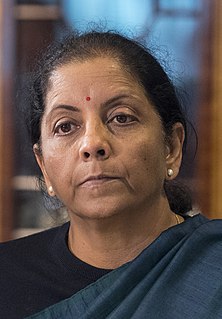 Nirmala Sitharaman is an Indian politician serving as the current Minister of Finance and Corporate Affairs of India. She is a member of the Rajya Sabha, upper house of the Indian Parliament, since 2014. Sitharaman formerly served as the Defence Minister of India, thereby becoming India's second female defence minister and also the second female finance minister after Indira Gandhi, and first full-time female Finance Minister. She has served as the Minister of State for Finance and Corporate Affairs under the Ministry of Finance and the Minister for Commerce and Industry with independent charge. Prior to that, she served as a national spokesperson for the BJP. 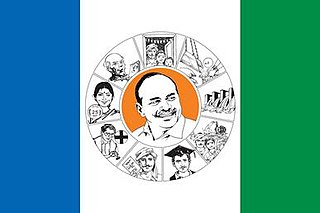 The YSR Congress Party an acronym for Yuvajana Sramika Rythu Congress Party which literally means Youth, Labour and Farmers Congress Party, is an Indian regional political party in the state of Andhra Pradesh, India. It was founded by Y. S. Jaganmohan Reddy, the son of former Andhra Pradesh chief minister Y. S. Rajasekhara Reddy. They were members of the Indian National Congress until 2011, Later he decided to split from Congress. He was also elected as national party president by his members.

Jaggampeta Assembly constituency is a constituency in East Godavari district of Andhra Pradesh, representing the state legislative assembly in India. It is one of the seven assembly segments of Kakinada, along with Tuni, Pithapuram, Kakinada Rural, Peddapuram and Kakinada City. Jyothula Naga Veera Venkata Vishnu Satya Marthanda Rao is the present MLA of the constituency, who won the 2019 Andhra Pradesh Legislative Assembly election from YSR Congress Party. As of 25 March 2019, there a total of 211,402 electors in the constituency.

Kakinada Rural is a constituency in East Godavari district of Andhra Pradesh, representing the state legislative assembly in India. It is one of the seven assembly segments of Kakinada, along with Tuni, Prathipadu (SC), Pithapuram, Peddapuram, Kakinada City and Jaggampeta. Kurasala Kannababu is the present MLA of the constituency, who won the 2019 Andhra Pradesh Legislative Assembly election from YSR Congress Party. As of 25 March 2019, there a total of 249,011 electors in the constituency.

Guntupalli Venkata Lakshmi Narasimha Rao is an Indian politician of the Bharatiya Janata Party. He is a member of the Rajya Sabha, the upper house of Indian Parliament, representing the state of Uttar Pradesh.