Thought Crimes: The Case of the Cannibal Cop

Thought Crimes: The Case of the Cannibal Cop is a 2015 American documentary film about Gilberto Valle, directed and produced by Erin Lee Carr. [1] It was produced for HBO Documentary Films [2] and it premiered at the 2015 Tribeca Film Festival. [3] 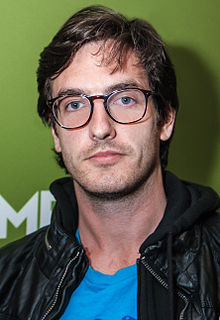 Andrew Jenks is an American filmmaker.

Armin Meiwes is a German former computer repair technician who achieved international notoriety for killing and eating a voluntary victim in 2001, whom he had found via the Internet. After Meiwes and the victim jointly attempted to eat the victim's severed penis, Meiwes killed his victim and proceeded to eat a large amount of his flesh. He was arrested in December 2002. In January 2004, Meiwes was convicted of manslaughter and sentenced to eight years and six months in prison. In a retrial May 2006, he was convicted of murder and sentenced to life imprisonment. Because of his acts, Meiwes is also known as the Rotenburg Cannibal or Der Metzgermeister.

Bill Guttentag is a double Oscar-winning dramatic and documentary film writer-producer-director. His films have premiered at the Sundance, Cannes, Telluride and Tribeca film festivals.

Racing Dreams is a 2009 documentary film directed by Marshall Curry following two boys and a girl through a season of World Karting Association (WKA) racing as they compete and aspire to become professional NASCAR drivers.

Andrew Rossi is an American filmmaker, known for directing documentaries such as Page One: Inside the New York Times (2011).

Daniel Junge is an American documentary filmmaker. On February 26, 2012, he won the Academy Award for Best Documentary for the film Saving Face, which he co-directed along with Pakistani filmmaker Sharmeen Obaid-Chinoy. He lives in Los Angeles, CA.

The Adderall Diaries is a 2015 American crime thriller film written and directed by Pamela Romanowsky, based on a "true-crime memoir" book of the same name by Stephen Elliott. The underlying true crime is the Hans Reiser murder case. The film stars James Franco, Ed Harris, Amber Heard and Christian Slater.

Tom Donahue is an American film director and producer. His latest documentaries include This Changes Everything, which he directed and produced, about systemic gender bias and discrimination against women in Hollywood and entertainment, and HBO's Bleed Out, which he produced with Ilan Arboleda under the banner of their independent production studio, CreativeChaos vmg. The Los Angeles Press Club awarded Bleed Out with the film Best Documentary and runner-up for Best Medical/Health Reporting at its annual National Arts and Entertainment Journalism Awards and SoCal Journalism Awards in July 2019. Both films premiered in the fall of 2018. Donahue has also received much critical acclaim for directing HBO's Casting By, which was nominated for an Emmy, and Thank You for Your Service, which was released theatrically by Gathr Films in 2016. In 2010, Donahue founded the production company CreativeChaos vmg with Ilan Arboleda and Steve Edwards.

Marc Smerling is an American film producer, screenwriter and cinematographer. He was nominated for an Oscar for Capturing the Friedmans in 2003, and co-wrote and produced The Jinx, a six-part HBO documentary on suspected murderer Robert Durst.

Jerry Rothwell is a British documentary filmmaker best known for the award-winning feature docs How to Change the World (2015), Town of Runners (2012), Donor Unknown (2010), Heavy Load (2008) and Deep Water (2006). All of his films have been produced by Al Morrow of Met Film.

Erin Lee Carr is an American documentary filmmaker best known for Thought Crimes: The Case of the Cannibal Cop, Mommy Dead and Dearest and the HBO documentaries I Love You, Now Die: The Commonwealth vs. Michelle Carter and At the Heart of Gold: Inside the USA Gymnastics Scandal. She is also the author of memoir called All That You Leave Behind: A Memoir. Carr is the daughter of the late The New York Times media columnist David Carr.

Gilberto Valle III is a former New York City police officer who was arrested after his wife discovered he was spending time in Internet chat rooms describing detailed plans to abduct, torture, rape and cannibalize women; Valle claimed all scenarios he described were mere fantasy. The case drew widespread attention for its unusual nature — Valle was dubbed the "Cannibal Cop" — and because of the legal issue of whether describing criminal activities crosses the line into criminal intent. 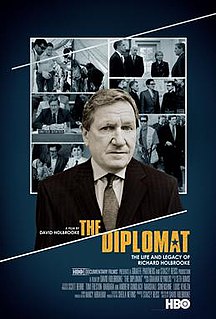 The Diplomat is a biographical documentary film released in 2015 about former U.S. Ambassador Richard Holbrooke, whose five-decade career began as a Foreign Service Officer in Vietnam during the war. At the time of his death in December 2010, he was the Obama administration's special representative for Afghanistan and Pakistan. The documentary's perspective is from Holbrooke's son, David, who directed the film.

Body Team 12 is a 2015 short-documentary film about the Red Cross workers of Liberia, who collected dead bodies during the height of the Ebola outbreak in West Africa. The story is told by Garmai Sumo, a female worker who served as a nurse during the epidemic. It is directed by David Darg and produced by Darg and Bryn Mooser, while Olivia Wilde and Paul Allen of Vulcan Productions are executive producers.

My Depression is a 2014 animated short film based on My Depression: A Picture Book by Elizabeth Swados. The film was written and directed by Swados, Robert Marianetti and David Wachtenheim, and featured the voices of Sigourney Weaver, Steve Buscemi and Fred Armisen. Distributed by HBO, My Depression was premiered at the 2014 Tribeca Film Festival and competed in Best Documentary.

Bryan Sarkinen is an American cinematographer, best known for shooting documentaries such as The First Monday in May (2016).

What's My Name: Muhammad Ali is a 2019 documentary film directed by Antoine Fuqua. The film is produced by Maverick Carter, Maren Domzalski, Antoine Fuqua, Bill Gerber, Noor Haydar, and LeBron James under the banner of Sutter Road Picture Company and is distributed by HBO. The film is based on life of Muhammad Ali.

Dyana Winkler is an American director, producer and writer. She was named one of Variety's 2018 top 10 documentary filmmakers and is best known for her work on the documentary film United Skates.