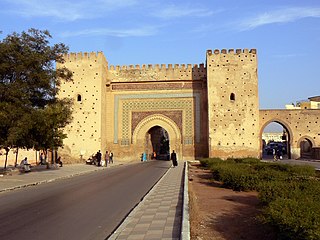 Meknes is one of the four Imperial cities of Morocco, located in northern central Morocco and the sixth largest city by population in the kingdom. Founded in the 11th century by the Almoravids as a military settlement, Meknes became the capital of Morocco under the reign of Sultan Moulay Ismaïl (1672–1727), son of the founder of the Alaouite dynasty. Moulay Ismaïl created a massive imperial palace complex and endowed the city with extensive fortifications and monumental gates. The city recorded a population of 632,079 in the 2014 Moroccan census. It is the seat of Meknès Prefecture and an important economic pole in the region of Fès-Meknès.

Al Bayda' or Beidha may refer to:

The history of the city of Casablanca in Morocco has been one of many political and cultural changes. At different times it has been governed by Berber, Roman, Arab, Portuguese, Spanish, French, British, and Moroccan regimes. It has had an important position in the region as a port city, making it valuable to a series of conquerors during its early history. 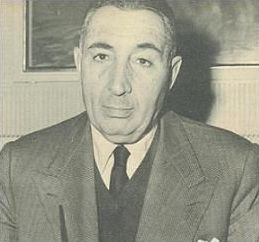 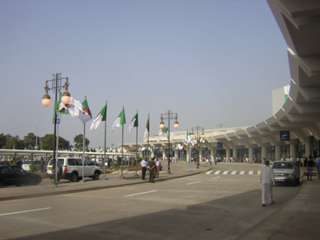 Dar El Beïda is a suburb of Algiers, Algeria. It is the seat of the district with the same name. During French colonial times, it was officially called by its French name Maison Blanche, which meant the same thing as its current Arabic name: (the) white house.. It is pronounced [adːaːr albajdˤaːʔ] in Classical Arabic and [(ə)dɑr.(əl)bɑjdɑ] in Darja. It has an area of 3200 hectares. It is home to the international Houari Boumedienne Airport, the largest in Algeria. The airport is divided into two main terminals, one for international flights and the older one for domestic flights. It has 44,753 inhabitants as of the 1998 census. In 1987 it had 12,900 inhabitants.

Abdelkrim Ghallab was a Moroccan political journalist, cultural commentator, and novelist. He is an important figure both in the literary and political field. 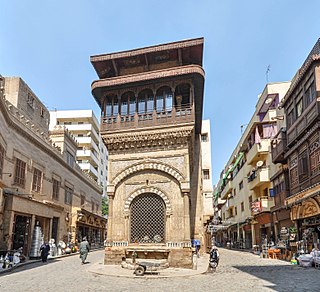 Sabil-Kuttab of Abd al-Rahman Katkhuda is a historic monument in the historic district of Cairo, Egypt. It comprises a public fountain or sabil, an elementary Quran school or kuttab, and an adjacent residential wing. A prime example of Egyptian architecture of its time, it was commissioned in 1744 by Abd al-Rahman Katkhuda, a local official who was a prominent patron of architecture.

Ahmed al-Tayyeb Aldj is a well known Moroccan writer of poetry and drama.

Abdelkarim Tabbal is a Moroccan poet.

Ali Siqli is a Moroccan writer of children's books and drama. In 1982 he received the Great Prize of Morocco and the international King Faysal award.

Husayn Fawzi Al Najjar was an Egyptian Historian, Political Scientist, Strategist, and Islamic scholar who made major contributions to the fields of history, political science, and strategy of the Middle East, having written more than 55 books on the subjects above.

Casablanca-Settat is one of the twelve administrative regions of Morocco. It covers an area of 20,166 km² and recorded a population of 6,861,739 in the 2014 Moroccan census, 69% of which lived in urban areas. The capital of the region is Casablanca.

Issam Abdel-Masih Mahfouz was a Lebanese playwright, poet, journalist, author, translator, and critic. His literary works include dozens of books on politics, culture, and theater, as well as “dialogues” - imagined exchanges with historical figures. During his lifetime he was also well known as a Professor of Dramatic Arts at the Lebanese University and for his writing in the Lebanese newspaper al-Nahār, particularly its culture section.

The following is a timeline of the history of the city of Meknes, Morocco. 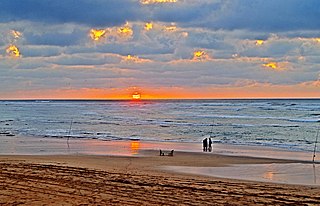 Dar Bouazza is a municipality in Nouaceur Province, Casablanca-Settat, Morocco. It is a rapidly growing suburb of Casablanca located about 20 km west of that city. Dar Bouazza covers an area of 48.36 km² and recorded a population of 151,373 in the 2014 Moroccan census.

The Dar al-Makina or simply Makina is a former arms factory in Fez, Morocco.