Thousand Islands constitute an archipelago that straddles the Canada-U.S. border in the Saint Lawrence River.

Thousand Islands may also refer to:

This disambiguation page lists articles associated with the title Thousand Islands.
If an internal link led you here, you may wish to change the link to point directly to the intended article. 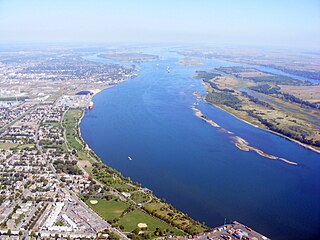 The Saint Lawrence River is a large river in the middle latitudes of North America. The Saint Lawrence flows in a roughly north-easterly direction, connecting the Great Lakes with the Atlantic Ocean and forming the primary drainage outflow of the Great Lakes Basin. It traverses the Canadian provinces of Quebec and Ontario, and is part of the international boundary between Ontario, Canada, and the U.S. state of New York. This river provides the basis for the commercial Saint Lawrence Seaway.

Malay may refer to: 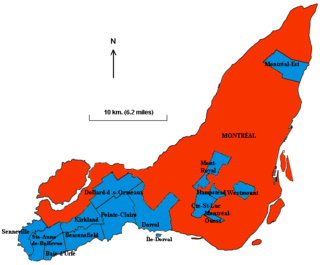 The Island of Montreal, in southwestern Quebec, Canada, is the site of the city of Montreal. It is located at the confluence of the Saint Lawrence and Ottawa rivers. It is separated from Île Jésus (Laval) by the Rivière des Prairies.

The Rivière des Prairies is a delta channel of the Ottawa River in southwestern Quebec, Canada. The indigenous inhabitants of what's now known as the Island of Montreal called it Skowanoti, meaning "River behind the island". The river separates the cities of Laval and Montreal. 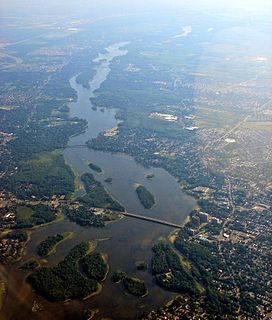 The Rivière des Mille Îles is a channel of the Ottawa River in southwestern Quebec, Canada and runs into the Rivière des Prairies. It is 42 kilometres (26 mi) long.

Murray may refer to:

Long Island is a densely populated island in the southeastern geographical area of New York State.

A virgin is a person who has not engaged in sexual intercourse.

Bermuda, Islands of Bermuda, or The Somers Isles is an Atlantic archipelago, British Overseas Territory, and a former part of Virginia.

Seven Islands or Seven Isles may refer to:

Black Island may refer to:

Madeira, officially named the Autonomous Region of Madeira, is one of the two autonomous regions of Portugal ; it is an archipelago situated in the north Atlantic Ocean, southwest of Portugal.

Pins is the plural of "pin", a fastening device.

Mille Lacs Lake is a large but shallow lake in the U.S. state of Minnesota. It is located in the counties of Mille Lacs, Aitkin, and Crow Wing, roughly 75 miles north of the Minneapolis-St. Paul metropolitan area.