"Three-Ten to Yuma" is a short story written by Elmore Leonard that was first published in Dime Western Magazine, a 1950s pulp magazine, in March 1953. It is one of the very few Western stories to have been adapted to the screen twice, in 1957 and in 2007.

Paul Scallen, a deputy marshal, is escorting train robber and wanted fugitive Jimmy Kidd to Tucson to stand trial. The two travel to a small town called Contention, where they prepare to catch a train to Yuma later in the afternoon. The two hole up in a hotel room close to the train station with the help of Mr. Timpey, a representative of Wells Fargo sent to ensure Kidd is brought to justice for stealing the bank's money.

Scallen and Kidd wait in the hotel room and spend the next few hours discussing Scallen's pay and motivations. Scallen sees several men waiting outside, who are revealed by Kidd to be his gang, who have been tracking them in secret. Their leader, Kidd's loyal second-in-command Charlie Prince, asks after Kidd, who assures Charlie that he will soon be released and urges Scallen to do so to avoid bloodshed. Scallen refuses and the two continue to wait for the train. Mr. Timpey returns, along with another man named Moon, who is intent on killing Kidd for a crime he was acquitted of in a previous trial. After a brief scuffle in which Scallen incapacitates Moon before he can shoot Kidd, the two leave the hotel room in order to catch the arriving train to Yuma. After reaching the train station, Scallen finds himself surrounded by Charlie’s men, and after a brief exchange, a gunfight ensues in which Kidd attempts to crawl away while Scallen shoots Charlie and another gang member dead. Scallen makes a break for the train, pulling Kidd onto the car with him. Safely inside the train car, the two agree that Scallen has earned his money.

The written story is the kernel from which the two films grew, and the source of some dialogue in each film. The names of most characters in the movies differ from those in the story, save that of Charlie Prince, a character in each version.

The story is collected in The Complete Western Stories of Elmore Leonard [1] as well as in the selection of Leonard's stories titled Three-Ten to Yuma and Other Stories. [2] 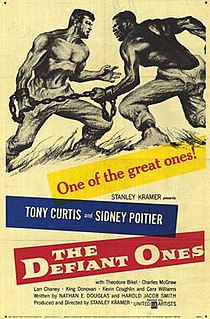 The Defiant Ones is a 1958 American adventure drama film which tells the story of two escaped prisoners, one white and one black, who are shackled together and who must co-operate in order to survive. It stars Tony Curtis and Sidney Poitier.

Kangaroo Jack is a 2003 crime black comedy film produced by Castle Rock Entertainment and Jerry Bruckheimer Films, distributed by Warner Bros. Pictures, directed by David McNally with a screenplay by Steve Bing and Scott Rosenberg from a story by Bing and Barry O'Brien. The film is produced by Jerry Bruckheimer with music by Trevor Rabin and stars Jerry O'Connell, Anthony Anderson, Estella Warren, Michael Shannon, and Christopher Walken, with Adam Garcia as the uncredited voice of the titular character. 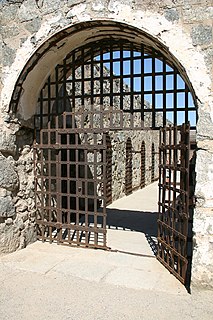 The Yuma Territorial Prison is a former prison located in Yuma, Arizona, United States. Opened on July 1, 1876, and shut down on September 15, 1909. It is one of the Yuma Crossing and Associated Sites on the National Register of Historic Places in the Yuma Crossing National Heritage Area. The site is now operated as a historical museum by Arizona State Parks as Yuma Territorial Prison State Historic Park. 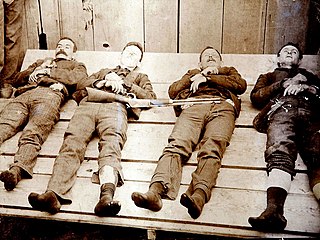 The Dalton Gang was a group of outlaws in the American Old West during 1890–1892. It was also known as The Dalton Brothers because four of its members were brothers. The gang specialized in bank and train robberies. During an attempted double bank robbery in Coffeyville, Kansas, in 1892, two of the brothers and two other gang members were killed; Emmett Dalton survived, was captured, and later pleaded guilty to second-degree murder, although he later asserted that he never fired a shot during the robbery. He was paroled after serving 14 years in prison.

Elmore John Leonard Jr. was an American novelist, short story writer, and screenwriter. His earliest novels, published in the 1950s, were Westerns, but he went on to specialize in crime fiction and suspense thrillers, many of which have been adapted into motion pictures. 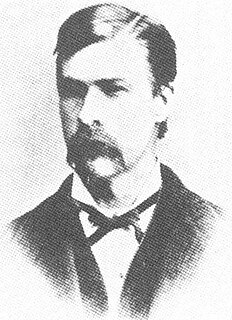 Morgan Seth Earp was an American sheriff and lawman. He served as Tombstone, Arizona's Special Policeman when he helped his brothers Virgil and Wyatt, as well as Doc Holliday, confront the outlaw Cochise County Cowboys in the Gunfight at the O.K. Corral on October 26, 1881. All three Earp brothers had been the target of repeated death threats made by the Cowboys who were upset by the Earps' interference in their illegal activities. The lawmen killed Cowboys Tom and Frank McLaury and Billy Clanton. All four lawmen were charged with murder by Billy's older brother, Ike Clanton, who had run from the gunfight. During a month-long preliminary hearing, Judge Wells Spicer exonerated the men, concluding they had been performing their duty.

Daniel Kelly was an Australian bushranger and outlaw. The son of an Irish convict, he was the younger brother of the bushranger Ned Kelly. Dan and Ned killed three policemen at Stringybark Creek in northeast Victoria, near the present-day town of Tolmie, Victoria. With two friends, Joe Byrne and Steve Hart, the brothers formed the Kelly Gang. They robbed banks, took over whole towns, and kept the people in Victoria and New South Wales frightened. For two years the Victorian police searched for them, locked up their friends and families, but could not find them. Dan Kelly died during the infamous siege of Glenrowan.

3:10 to Yuma is a 1957 American Western film directed by Delmer Daves, starring Glenn Ford and Van Heflin. Based on a 1953 short story by Elmore Leonard, it is about a drought-impoverished rancher who takes on the risky job of escorting a notorious outlaw to justice. In 2012, it was selected for preservation in the United States National Film Registry by the Library of Congress as "culturally, historically, or aesthetically significant". 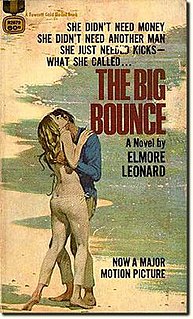 The Big Bounce is a crime novel written by Elmore Leonard, published in 1969. 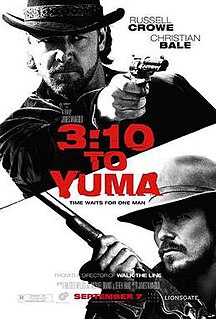 3:10 to Yuma is a 2007 American western action drama film directed by James Mangold and produced by Cathy Konrad, starring Russell Crowe and Christian Bale in the lead roles with supporting performances by Peter Fonda, Gretchen Mol, Ben Foster, Dallas Roberts, Alan Tudyk, Vinessa Shaw, and Logan Lerman. It is about a drought-impoverished rancher (Bale) who takes on the dangerous job of taking a notorious outlaw (Crowe) to justice. It is the second adaptation of Elmore Leonard's 1953 short story "Three-Ten to Yuma", after the 1957 film of the same name. Filming took place in various locations in New Mexico. 3:10 to Yuma opened September 7, 2007, in the United States and received positive reviews from critics. It grossed $71 million worldwide on the budget of $48-$55 million. 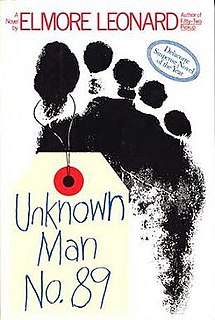 Unknown Man #89 is a crime novel written by Elmore Leonard, published in 1977, just after his novel Swag, and preceding The Hunted. It is a sequel to The Big Bounce. 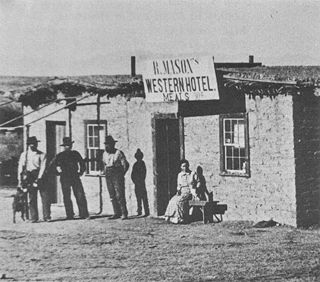 Contention City or Contention is a ghost mining town in Cochise County in the southeastern part of the U.S. state of Arizona. It was occupied from the early-1880s through the late-1880s in what was then known as the Arizona Territory. Only a few foundations now remain of this boomtown which was settled and abandoned with the rise and fall of silver mining in and around the area of Tombstone. 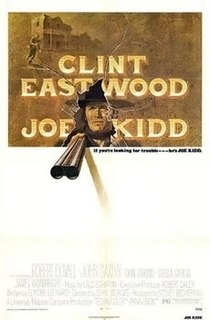 The Burglar is a 1957 crime thriller film noir released by Columbia Pictures, based on the 1953 novel of the same name by David Goodis. The picture stars Dan Duryea in the titular role and Jayne Mansfield. The movie was the first feature film directed by Paul Wendkos. John Facenda, a well-known Philadelphia sportscaster, is featured as a news anchor in one scene. Much of the film was shot on location in Philadelphia and Atlantic City. 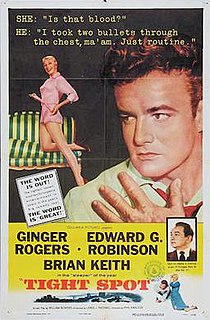 The Reno Gang, also known as the Reno Brothers Gang and The Jackson Thieves, were a group of criminals that operated in the Midwestern United States during and just after the American Civil War. Though short-lived, they carried out the first three peacetime train robberies in U.S. history. Most of the stolen money was never recovered. 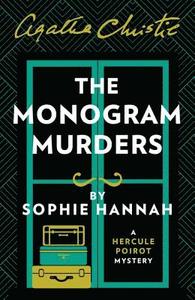 The Monogram Murders is a mystery novel by British writer Sophie Hannah, based on characters created by Agatha Christie. It is the first in her series of Hercule Poirot novels, after being authorised by the estate of Agatha Christie to write new stories for the character. The novel was followed by Closed Casket (2016), The Mystery of Three Quarters (2018), and The Killings at Kingfisher Hall (2020).

"Bulletville" is the thirteenth episode and season finale of the first season of the American Western crime drama television series Justified. It is the 13th overall episode of the series and was written by co-executive producer Fred Golan and directed by Adam Arkin. It originally aired on FX on June 8, 2010.