Three-point lighting is a standard method used in visual media such as theatre, video, film, still photography and computer-generated imagery. [1] By using three separate positions, the photographer can illuminate the shot's subject (such as a person) however desired, while also controlling (or eliminating entirely) the shading and shadows produced by direct lighting.

The key light , as the name suggests, shines directly upon the subject and serves as its principal illuminator; more than anything else, the strength, color and angle of the key determines the shot's overall lighting design.

In indoor shots, the key is commonly a specialized lamp, or a camera's flash. In outdoor daytime shots, the Sun often serves as the key light. In this case, of course, the photographer cannot set the light in the exact position they want, so instead arranges the shot to best capture the sunlight, perhaps after waiting for the sun to position itself just right.

The fill light also shines on the subject, but from a side angle relative to the key and is often placed at a lower position than the key (about at the level of the subject's face). It balances the key by illuminating shaded surfaces, and lessening or eliminating chiaroscuro effects, such as the shadow cast by a person's nose upon the rest of the face. It is usually softer and less bright than the key light (up to half), and more to a flood. Not using a fill at all can result in stark contrasts (due to shadows) across the subject's surface, depending upon the key light's harshness. Sometimes, as in low-key lighting, this is a deliberate effect, but shots intended to look more natural and less stylistic require a fill.

In some situations a photographer can use a reflector (such as a piece of white cardstock mounted off-camera, or even a white-painted wall) as a fill light instead of an actual lamp. Reflecting and redirecting the key light's rays back upon the subject from a different angle can cause a softer, subtler effect than using another lamp.

The backlight (a.k.a. the rim, hair, or shoulder light) shines on the subject from behind, often (but not necessarily) to one side or the other. It gives the subject a rim of light, serving to separate the subject from the background and highlighting contours.

A three-point system in theatre can be used in a variety of ways to help set a mood of the character. By having bright key light, but minimal fill and back light, this will give the effect of anger, whereas if the scene is very brightly lit with little shadow on the actor, this can make the scene look very happy.

The addition of a fourth light, the background light , makes for a four-point lighting setup.

The film industry is built upon many technologies and techniques, drawing upon photography, stagecraft, music, and many other disciplines. Following is an index of specific terminology applicable thereto. 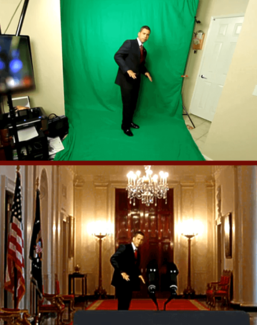 Chroma key compositing, or chroma keying, is a visual effects/post-production technique for compositing (layering) two images or video streams together based on colour hues. The technique has been used in many fields to remove a background from the subject of a photo or video – particularly the newscasting, motion picture, and video game industries. A colour range in the foreground footage is made transparent, allowing separately filmed background footage or a static image to be inserted into the scene. The chroma keying technique is commonly used in video production and post-production. This technique is also referred to as colour keying, colour-separation overlay, or by various terms for specific colour-related variants such as green screen, blue screen and magic pink; chroma keying can be done with backgrounds of any colour that are uniform and distinct, but green and blue backgrounds are more commonly used because they differ most distinctly in hue from most human skin colours. No part of the subject being filmed or photographed may duplicate the colour used as the backing.

A light meter is a device used to measure the amount of light. In photography, a light meter is often used to determine the proper exposure for a photograph. Typically a light meter will include either digital or analog electronic circuit, which allows the photographer to determine which shutter speed and f-number should be selected for an optimum exposure, given a certain lighting situation and film speed. 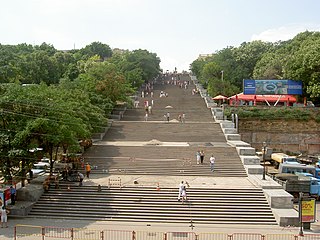 Forced perspective is a technique which employs optical illusion to make an object appear farther away, closer, larger or smaller than it actually is. It manipulates human visual perception through the use of scaled objects and the correlation between them and the vantage point of the spectator or camera. It has uses in photography, filmmaking and architecture.

A flash is a device used in photography producing a flash of artificial light at a color temperature of about 5500 K to help illuminate a scene. A major purpose of a flash is to illuminate a dark scene. Other uses are capturing quickly moving objects or changing the quality of light. Flash refers either to the flash of light itself or to the electronic flash unit discharging the light. Most current flash units are electronic, having evolved from single-use flashbulbs and flammable powders. Modern cameras often activate flash units automatically. 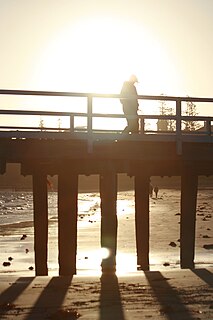 Contre-jour is a photographic technique in which the camera is pointing directly toward a source of light and an equivalent technique of painting. It was also used in paintings prior to its use in photography, where the shadows would fall to the left on the left, to the right on the right and forward in the lower centre. The edges of the subject would show surprising colour effects. 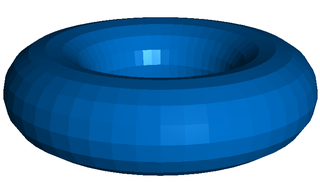 Shading refers to the depiction of depth perception in 3D models or illustrations by varying the level of darkness.

Underwater photography is the process of taking photographs while under water. It is usually done while scuba diving, but can be done while diving on surface supply, snorkeling, swimming, from a submersible or remotely operated underwater vehicle, or from automated cameras lowered from the surface. 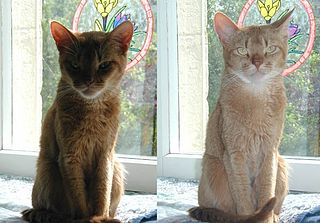 Rembrandt lighting is a lighting technique that is used in studio portrait photography. It can be achieved using one light and a reflector, or two lights, and is popular because it is capable of producing images which appear both natural and compelling with a minimum of equipment. Rembrandt lighting is characterized by an illuminated triangle under the eye of the subject on the less illuminated side of the face. It is named for the Dutch painter Rembrandt, who often used this type of lighting. 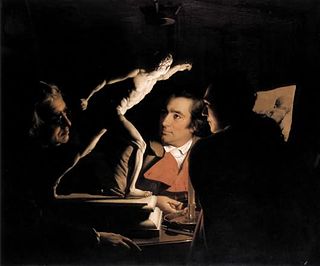 In lighting design, backlighting is the process of illuminating the subject from the back. In other words, the lighting instrument and the viewer face each other, with the subject in between. This creates a glowing effect on the edges of the subject, while other areas are darker. The backlight can be a natural or artificial source of light. When artificial, the back light is usually placed directly behind the subject in a 4-point lighting setup. A back light, which lights foreground elements from the rear, is not to be confused with a background light, which lights background elements. 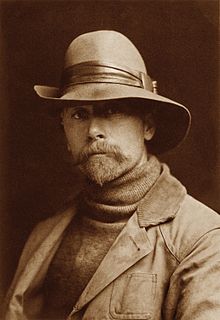 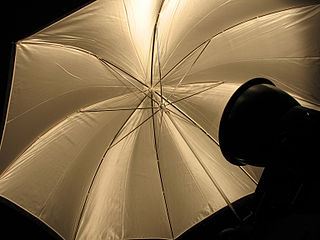 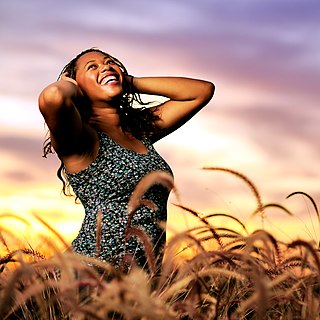